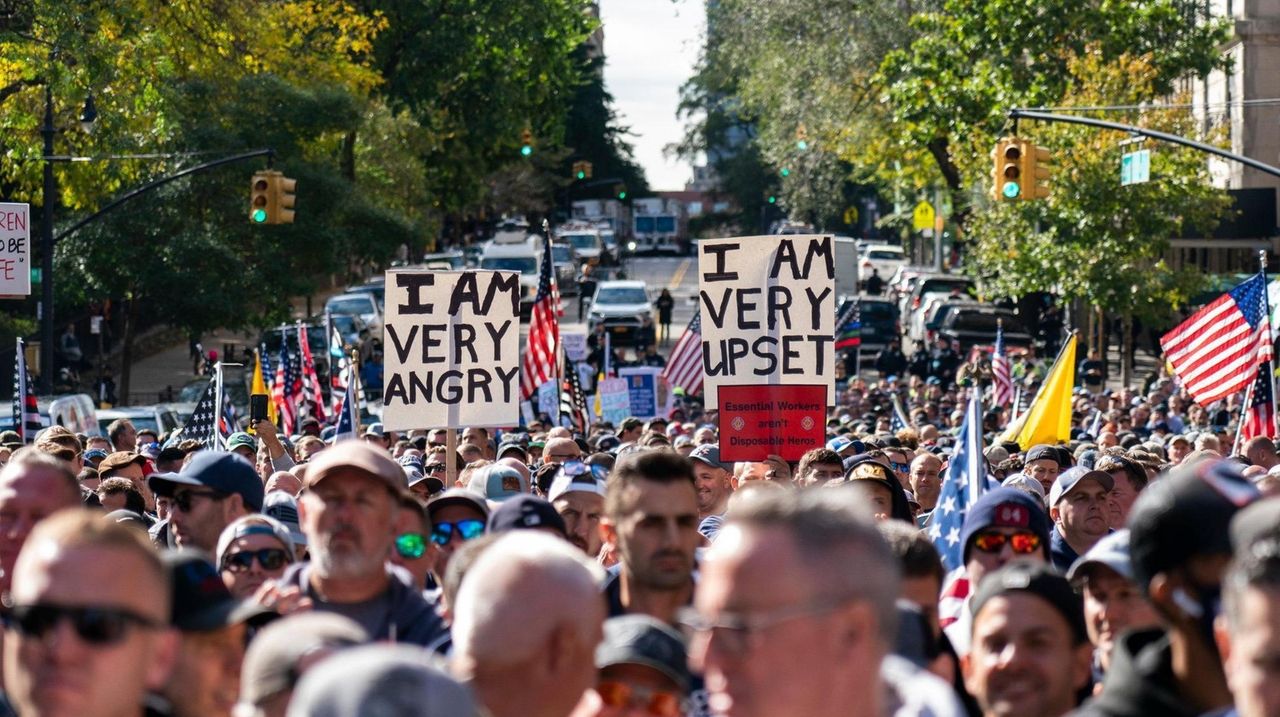 New York City Mayor Bill de Blasio said more city workers subject to his COVID-19 vaccine mandate will get the shots in the coming days, even as a large crowd of angry FDNY firefighters and their supporters denounced his order at a rally outside Gracie Mansion on Thursday.

De Blasio told city employees on Oct. 20 that they need to submit proof of COVID-19 vaccination by 5 p.m. Friday. Employees who fail to do so may be put on unpaid leave as early as Monday.

Nearly a quarter of city employees had not received the vaccine by Thursday morning, de Blasio said during his daily press briefing, and could be placed on unpaid leave next week.

"I am not having second thoughts," de Blasio said. "We expected that a lot of the vaccinations would happen toward the end of the deadline."

The leaders of FDNY, NYPD and other unions warned that New York will face dire consequences, including shuttered firehouses, mountains of trash and delayed response times leading to avoidable deaths if the city places unvaccinated employees on unpaid leave.

"There is going to be a catastrophic manpower shortage if 3,500 firefighters that are currently unvaccinated are told not to go to work," Andrew Ansbro, president of the FDNY Firefighters Association, said at the rally outside de Blasio’s Upper East Side home.

FDNY Commissioner Daniel A. Nigro said earlier this week that the department may have to close up to 20% of its fire companies and put 20% fewer ambulances on the road because of staffing shortages. NYPD and Sanitation officials have said they, too, are preparing contingency plans.

The mayor said many departments will rely on mandatory overtime from vaccinated employees, while others could see workers move from desk duty.

With the deadline just a day away, 76% of city employees subject to the mandate had gotten at least one shot, up from 71% the day earlier, according to de Blasio. Those figures include 74% of NYPD officers, 67% of Sanitation workers and 53% of Corrections employees. An FDNY spokesman said 65% of FDNY firefighters and 80% of the department’s EMS workers are vaccinated.

While de Blasio addressed the media at City Hall Thursday, furious FDNY firefighters and their supporters took over an entire city block outside Gracie Mansion and spilled into side streets to protest the vaccine mandate, which they called an intrusion into their personal lives.

One FDNY union official said it was unfair to force firefighters to choose between the vaccination or retirement in nine days. "Our test and vax program was working," James McCarthy, president of the FDNY Uniformed Fire Officers Association.

The crowd was visibly agitated, cheering when an FDNY supporter tossed a full garbage can over the Gracie Mansion fence and into the mayor’s yard.

Despite the palpable anger, the NYPD said there were no arrests and the only confrontations appeared to be verbal jousting between anti-mandate protesters and activists who said they came to protect a Black Lives Matter memorial on East End Avenue and East 86th Street from potential vandals.

Mike Salsedo of Smithtown said he attended the protest to support city employees opposed to the mandate.

"If you don’t have the right to choose, what is next?" asked Salsedo, who declined to say if he is city employee. "You should be able to control your own body and what you put in it."

Many union officials said they are not anti-vaccine, just anti-mandate, but many of the participants came to air a variety of grievances and conspiracy theories.