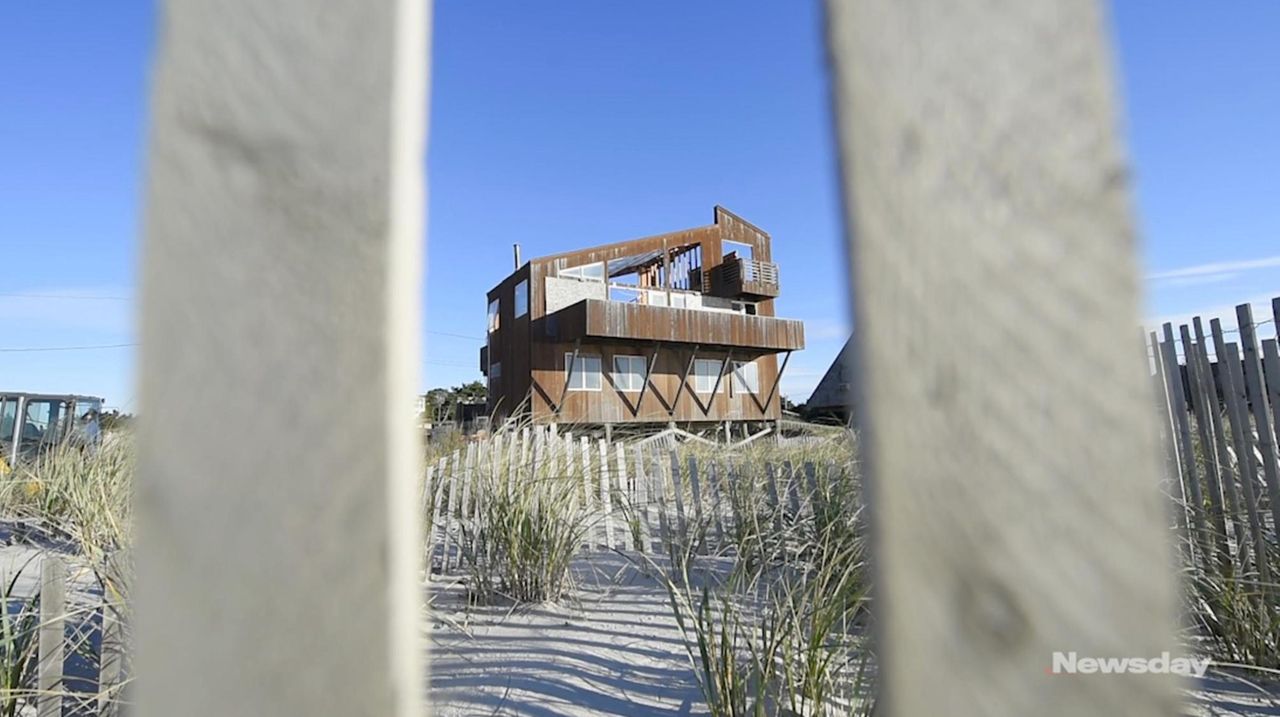 Bulldozers tackled two dozen oceanfront homes on Fire Island, clearing the way to rebuild dunes, though some scientists say the project will weaken the resort island and fail to ward off mainland floods.  Credit: Johnny Milano

The bulldozers have finally arrived to demolish two dozen oceanfront Fire Island homes, reigniting the debate over the effectiveness of the dune-building project along a section of the barrier island.

Work restoring dunes compromised by superstorm Sandy in 2012 is four years behind schedule, thanks to overbooked dredgers, winter storms and the complex process of acquiring land.

Rebuilding the dunes will prevent the ocean from overtopping Fire Island and threatening the mainland, according to the U.S. Army Corps of Engineers, the lead agency on the project.

Yet, several scientists say the work will have the opposite result, weakening the island while failing to ward off mainland floods.

Though federal taxpayers are paying for the dunes, Suffolk County was charged with obtaining hundreds of easements, arranging home buyouts and, in some cases, figuring out how to relocate pools and decks. Buyout prices were based on current appraisals, as the federal government requires.

Some homeowners fought the buyouts and 17 of the initial targets were spared. Some homeowners undertook major repairs after Sandy before learning about the plan. And some say they lost two summers while their houses sat empty.

“I spent $250,000 to rebuild and [elevate] the house, just so the government could rip it down," Dr. Emil Chynn, formerly of Ocean Bay Park, said by email. “The government should not have forced owners to sell until they were ready to demolish.”

Contractors began razing homes on Traffic Avenue in his community last week. Chynn’s home — and 23 others — likely will be gone by the end of January, according to the Army Corps. The homes are in Ocean Bay Park, Davis Park and Fire Island Pines, officials said.

The first three sections of the new dunes have already been built in other communities and in the unoccupied eastern and western ends of the island. The dunes have "performed as designed" and there has been no flooding behind them from severe storms, the Army Corps spokesman said.

Work on the fourth and last section should begin this spring and finish next year, the spokesman said. The dunes are about table-height for someone standing on the beach, which also is being elevated.

Rising seas and climate change have made flood control even more of an imperative, and the vital way barrier islands like Fire Island blunt storms is not in dispute.

The controversy instead centers on the best way to spend $280 million of federal Sandy aid. The dunes' price tag has risen from an initial $207 million estimate.

An Army Corps spokesman declined to comment on the increase and termed criticisms by engineers and coastal geologists as speculative.

Critics noted the dunes will span about only a third of the 32-mile-long island. They will do nothing to stop one of the main causes of coastal flooding — the volume of water pouring through the Moriches and Fire Island inlets, they said. And employing dunes to try to hold Fire Island in place undermines it, they said.

Without the dunes, storm surges carry sand to the center of the island, raising its height. The sand then flows into the bays, creating marshlands.

This enables barrier islands to survive by rolling over toward shallower waters. “It’s like a tank, almost, cruising up the coast as the sea level rises,” said Dylan McNamara, chairman of the Department of Physics and Physical Oceanography at the University of North Carolina at Wilmington.

Experts highlighted the vulnerability of barrier islands, citing a 1975 analysis by Columbia University geologists that found samples of the sea bed about 4½ miles south of Fire Island. The samples contained peat, which grows in bogs by land. The discovery revealed that Fire Island had actually drowned in place thousands of years ago.

“You hold it in place for a long period of time, the mean elevation is not getting higher,” he said. “Finally, when a storm comes and overwhelms the dunes — that’s when all hell breaks loose.”

The new dunes are not continuous and are not being built in the national park areas of Fire Island because Congress required the National Park Service to protect the park’s resources and “geological processes,” which include how wind and waves shape sand.

“How good is half a dam?” asked Aram Terchunian, coastal geologist, with First Coastal, an environmental consulting firm, in Westhampton.

Once the Army Corps dunes are finished, Fire Islanders will no longer be allowed to carry out their own sand replenishment projects because that could prevent the new dunes from working properly, officials said.

Nor can Fire Islanders count on more federal tax dollars to replenish the dunes in the future, which could cost hundreds of millions of dollars over three decades.

Whether the federal government partly pays for rebuilding the dunes, which the Army Corps expects will be necessary, depends on whether that cost is included in a separate $1.2 billion plan to shield Suffolk’s 83-mile-long South Shore.

The Fire Island to Montauk Point plan, which would raise or otherwise help flood-proof 4,400 South Shore homes in hazard areas on the mainland, also is several years late. It could be approved by summer of next year, the Army Corps spokesman said.

Steven Resler, a consultant and former deputy bureau chief with the state’s Coastal Management Program, said the dune dollars are "a waste" and the money should be redirected to the plan to protect all of Suffolk's South Shore.

And he said the new dunes are at odds with 1982 state statutes that mandate a “strategic retreat” policy, neither abandoning the coastline nor fortifying all of it.

Resler, who spent decades working on the Fire Island to Montauk Point plan, said: “What that plan was supposed to do, and what we got the Army Corps to agree to a dozen years ago, was to stop the structural approach on the barrier island, and to move people away.”