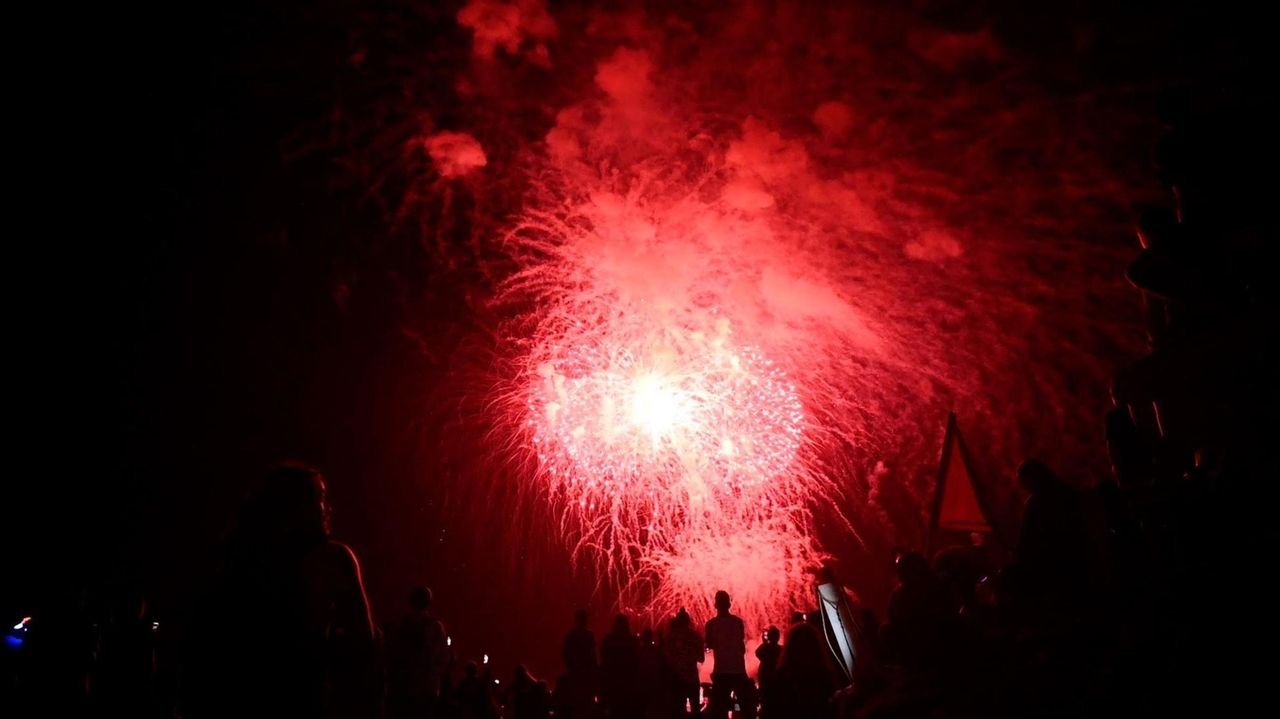 About 100,000 people flocked to Jones Beach State Park Sunday night to watch a 25-minute fireworks display that marked a return to holiday revelry after a 1-year hiatus from the pandemic. Credit: Howard Simmons

Crowds returned Sunday night to Jones Beach State Park to be dazzled by a 25-minute fireworks bonanza that marked a return to holiday revelry after a 1-year hiatus from the pandemic.

About 100,000 people flocked to the beach and watched from the boardwalk as fireworks shot into the sky from a barge offshore to the themes of "Captain America," "Star Wars" and the Ray Charles rendition of "America the Beautiful."

"There is a lot to celebrate this year. Not only our independence, but our great state making it through COVID and being together again," Cuomo said.

Several in the crowd stood on the boardwalk recording the fireworks show on their phones, posing for photos and waving glowing light sabers.

The Jones Beach show shot off 5,000 shells, synced to patriotic music mixed with modern hits like Taylor Swift and The Weeknd.

The pyrotechnics returned to Jones Beach this year after last year’s show was canceled by crowd restrictions during the pandemic.

Beachgoers came in lighter numbers than in past years due to a weekend of wet weather and slightly cooler temperatures Sunday in the 60s and 70s.

Still, state park officials expected about 100,000 people at Jones Beach throughout the day Sunday, about half of its peak capacity. In years past, a crowd of about 200,000 packed in for the show.

The beach reopened to full capacity this summer after the state lifted all COVID-19 restrictions.

For most of the day, the beaches had been packed with umbrellas and blankets camped out across the shoreline, with some folks arriving by 8:30 a.m. to get their prime real estate facing the ocean.

"It’s such a great feeling with everyone coming down here and we’re thrilled they’re able to celebrate the Independence Day program they were not able to see last year," Gorman said.

Other state parks were filled to capacity Sunday, including Lake Hempstead, Wildwood State Park in Riverhead and Shadmoor State Park in Montauk. Sunken Meadow State Park was at about 80% capacity, Gorman said.

Earlier, Jessica DiMartino of New Hyde Park stood on the crowded beach as her daughter and hundreds of other swimmers braved the crashing waves and the rising tide line lapping near beach blankets and umbrellas.

"It’s nice to be able to feel normal again. People aren’t complaining about the crowds like they were a few years ago," DiMartino said. "There’s nothing better than sitting in the sand watching the fireworks. I think people want to be out. Traffic is back and everyone wants to be out and are looking ahead."

Meanwhile, New York City’s signature firework show sponsored by Macy’s returned to full force after being shrunken and put on in surprise locations last year to discourage mass gatherings during the pandemic. The display Sunday night included discharges from the East River barges and off the top of the Empire State Building.

Hangin' in the Hamptons: Jennifer Lopez, more enjoy Fourth of July weekendLooking for a Hamptons fix? We're spotting sunbathers, partygoers, celebrities and more on the East End this holiday weekend.