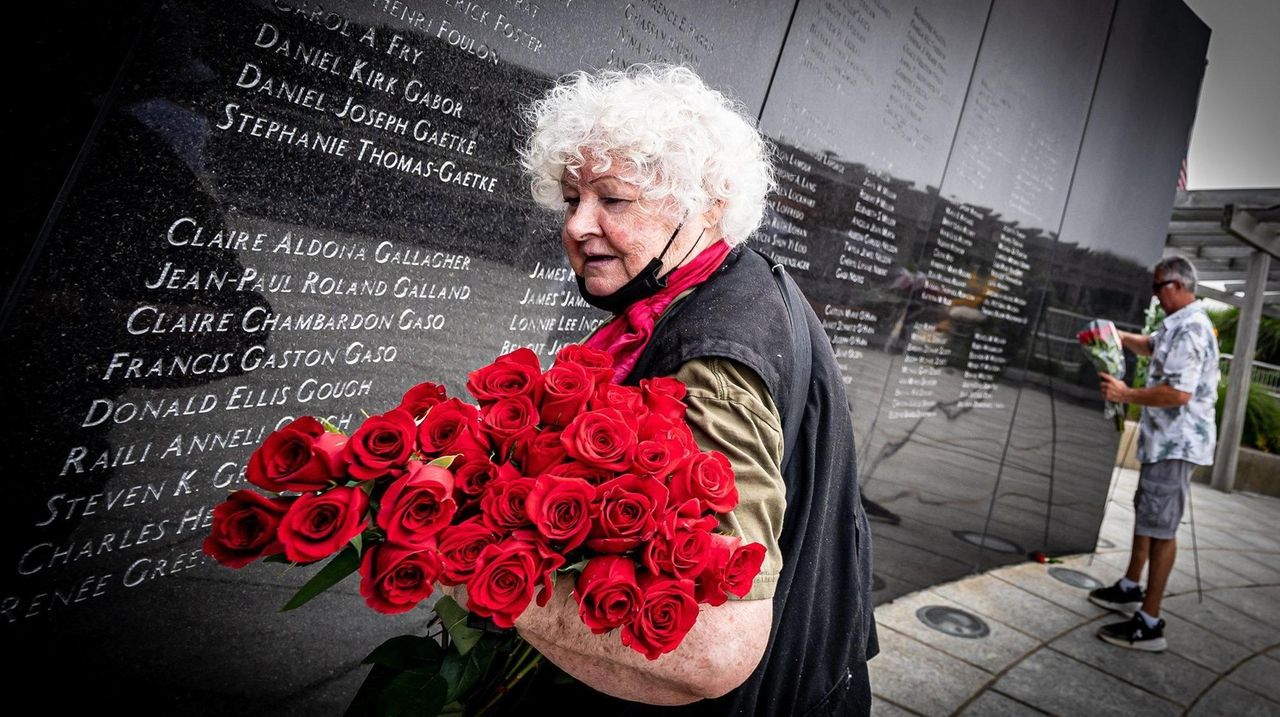 Family members, pilots and TWA investigators read the 230 names of passengers and flight crew killed on TWA Flight 800 during a solemn ceremony Saturday evening at Smith Point County Park where they handed out 230 carnations.

Some family members laid their flowers at a memorial wall while others placed them on the beach or tossed them into the ocean.

About 200 family members, friends and former TWA crew workers were at the beachfront memorial in the park south of Center Moriches. They left roses, wreaths and bouquets as they searched for names of loved ones on the granite memorial wall and paused to touch it.

The evening ceremony was led by speakers with Suffolk County emergency services, the National Transportation Safety Board and the Flight 800 family association.

Retired Suffolk County Emergency Services Commissioner David Fischler, who led the response off the coast of Center Moriches the night of July 17, 1996, said during the ceremony: "That night we responded to an emergency we had never seen in this country. We all know events occur in our lives where we remember where we were when that happened and never forget. Everyone responded that night will carry this with them to their graves."

Former NTSB investigator Peter Goelz said as the investigation wore on, families and FDNY chaplain the Rev. Mychal Judge planned funerals while both family members and investigators struggled with gaining information about the crash.

"The blueprint for how families are treated was written here with your tears and support," Goelz said. "Families here will never have to face the challenges you had to face and the world is different and better because of you."

People have gathered at the memorial site every year at the anniversary of the crash, with the exception of last year, during the COVID-19 pandemic. They have stood on the nearby shoreline as the names of those who died were read near sunset, around the same time the jet exploded and crashed about 10 miles offshore.

Smith Point is the closest public access point to where the debris field was found.

The flight bound for Paris and Rome exploded at 8:31 p.m. on July 17, 1996, just 12 minutes after takeoff from Kennedy Airport. Once the plane had climbed to an elevation of 13,800 feet, air traffic controllers lost radar and radio contact with the pilot.

For many, fighting back tears 25 years later, the memorial is a painful but comforting reminder of how fragile life is and how quickly they had to say goodbye.

Helen Siebert of Florida, Luz Mari Pelaez, formerly of Manorville, and Myriam Bossuyt each lost loved ones going to Paris and have grown closer over the years.

They all returned arm-in-arm Saturday, to laugh and cry together.

Siebert’s two daughters, Brenna, 25, and Chrisha, 28, were planning a backpacking trip through France with their cousins, Stephanie and Dan Gaetke.

Siebert remembers the agony of waiting to find information about her family until the next day.

"They were so excited about going, and it never entered their mind it wasn’t safe," Siebert said, fighting back tears. "A quarter of a century doesn’t seem possible. Sometimes it feels like just a few years ago, otherwise it feels like a long time."

Pelaez lost her daughter and son-in-law, Virginia and Eric Holst, of Manorville. They were going to a wedding in France.

She said she had a false sense of relief when she thought their plane had taken off, not realizing the flight was delayed just prior to the crash. She drove back and forth from the airport to Center Moriches trying to find answers.

And then she went to church.

"I asked God to take care of them," Pelaez said. "I knew they could swim and I wanted them to be OK."

Luc Bossuyt, Myriam's husband, was going to Paris on a business trip when her son called with news of the crash.

Among the victims were at least nine Long Islanders — from Long Beach, New Hyde Park, North Massapequa, Northport and Manorville.

Frank Lombardi, who helps organize and maintain the memorial, said the images of the exploding jetliner were seared into his memory as news of the tragedy spread 25 years ago.

"I was on the Long Island Expressway late at night when I heard it on the radio and got home as fast as I could. The first image I saw was the ocean on fire," Lombardi said.

The cause of the crash took years to determine. The National Transportation Safety Board ruled it was likely the result of an electrical short in faulty wiring, which ignited vapors in the plane’s fuel tank, triggering the explosion.

This year’s memorial has gained noticeable attention, Lombardi said, after investigators announced that the reconstructed pieces of the plane pulled from the Atlantic would finally be destroyed after the plane had been reassembled, first in a Calverton airplane hangar, and then near Washington, D.C.

The investigation attempted to bring closure to families and put to rest swirling conspiracy theories following the crash.

"It took years to figure out what caused the crash, because if you look at the reconstruction there were so many parts," Lombardi said.

Lombardi is also the acting director of Independent Group Home Living, which maintains the memorial that was dedicated in 2002. He said he has grown close to the families of the passengers as they return from around the world every year.

"We hope this gives the families a local home for the memorial," Lombardi said. "It means something different to every family member."

The crash spurred others to help people grieve together.

Breistroff, 25, had just finished playing hockey at Harvard and was flying to play in Europe.

"That night as he boarded the plane, we exchanged our final I love you’s, and he said I’ll call you when I get to Paris," she said. "That night as I saw the dark Atlantic Ocean, I thought he could survive and find a life raft. I kept calling, hoping he got onto a different flight."

The truth came at 2 a.m., she said, "and the call was difficult to comprehend; the enormity of the loss," Snow said.

She said it prompted her to form a support group connecting families of other air disasters.

"It means so much to be here with other families, knowing your life can change in an instant," Snow said. "We’ve all experienced this life-changing moment and I’m grateful for this memorial; that we have a place to come remember."

Photos: Mourners of Flight 800 victims gather on LIImages that capture the family members, pilots and TWA investigators as they read the 230 names of passengers and flight crew killed on TWA Flight 800 during a solemn ceremony Saturday evening at Smith Point County Park . 'A nightmare you don't wake up from': 25 years later, an oral history of TWA Flight 800Twenty-five years ago, on a beautiful July evening, the unthinkable happened in the skies over Long Island. 'It's served its purpose': Flight 800 reconstruction trained thousandsAs families and friends prepared to mark the crash's 25th anniversary, the NTSB says it will soon seek contractors to build a 3D electronic model and destroy the plane's remnants.