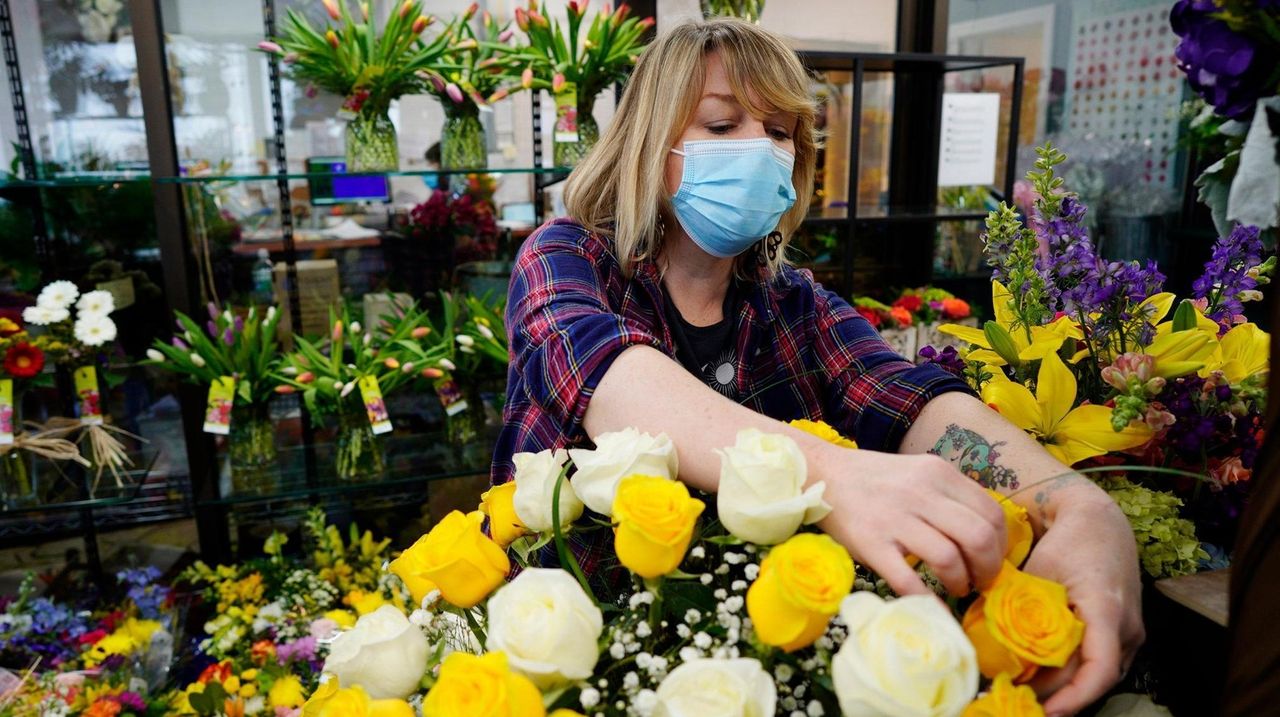 A year into the pandemic, flower sales have seen an increase for Mother's Day. Samantha Payne, manager of James Cress Florist in Smithtown, spoke to Newsday about the change in sales this year.  Credit: Newsday / Chris Ware

The flower business is in bloom once again after wilting last year during the coronavirus emergency.

Flower-growing farms had shrunk or shut down. Florists had closed up shop, with little to no business for the usual weddings, funerals, confirmations, proms, and even Mother’s Day. Already-harvested flowers went into the compost heap or into the trash. Florists gave away bouquets they couldn’t sell.

But now, in time for Mother’s Day 2021, spring weddings and prom season, Long Island and much of the United States are opening back up, and demand in the $8.5 billion global trade in cut flowers is outstripping supply, according to the industry.

Although it's too early to provide concrete numbers, "Sales are up for everyone. … Demand is higher for flowers now than in the past few decades," according to David Pruitt, who retired last month as chief executive of Certified American Grown, a trade group of domestic flower growers. He added: "I think a big part of it is the fact that everybody has been a shut-in, and as everybody starts to reconnect with their families … I think fresh flowers have become an important way of making that connection."

Depending on the survey, Mother’s Day and Valentine’s Day each vies for the biggest sales times for flowers over any other holiday of the year, according to Camron King, Pruitt’s successor.

"Mother’s Day is the biggest day for all kinds of flowers," King said, "whereas Valentine’s Day tends to be a huge day in roses."

At Smithtown’s James Cress Florist on East Main Street, roses are big for Mother’s Day, but mixed spring seasonal flowers such as peonies, lilacs, hyacinths and tulips are popular choices, too, according to store manager Samantha Payne, who said business is expected to be up about 10% over ordinary times, based on sales so far.

It’s a contrast from springtime 2020, when floral shops such as James Cress, like nearly all retailers deemed nonessential, had to close down as New York became the epicenter of the global coronavirus pandemic and the governor ordered lockdowns to stop the virus’ spread.

Now, after such a terrible year, said another James Cress manager, Liz Guido, "we need the cheerfulness of flowers at this time in our lives, the colors of flowers. … Everybody is ready for a bouquet on the table because of what we’ve gone through."

One of the patrons Saturday was James Gierak, 23, of Smithtown, who has been buying Mother’s Day flowers for his mother, Kimberly Gierak, since he was a teenager.

He couldn’t last year, due to the pandemic.

But Saturday, he was back at the florist, shopping for something with lavender. (His mother likes the color and the aroma.)

"My mom’s very special. She works very hard. She takes care of our family, and she deserves it," he said while on line.

While 61% of women plan to buy flowers for Mother's Day, 75% of men do, according to the National Retail Federation Mother's Day Spending Survey of 2021 plans. And flowers are the second most popular gift consumers expect to buy for Mother’s Day, after greeting cards, with 68% of respondents listing flowers as part of their plan, the National Retail Federation survey found.

Globally, the pandemic led flower farms to close or to shrink operations, and even jammed up supply chains of fertilizer needed to grow the plants; the industry still hasn’t recovered, leading to a "huge shortage of flowers" despite the higher demand, noted Andrew Scott, owner of a boutique called Arrangement Bar by Andrew Scott, which is usually in Garden City but has gone online-only for the pandemic from Babylon Village.

Still, Scott said, business for Mother’s Day is up 45% over an average year. There are 650 orders to be delivered Sunday — via eight trucks making stops, all before noon, between Floral Park to the west and William Floyd Parkway to the east. He spoke as he and his team made bouquets (which come wrapped in paper tied with ribbons) and arrangements (which are more expensive and come in a vase with water) consisting of soft blush tones, blousy roses, lavender and lilacs.

It’s not just the cut-flower business that’s doing better after a bad 2020.

Mother’s Day brunch reservations can be hard to come by. The holiday has long been the busiest day of the year for restaurants, owners say, so it was a blow last year when service was reduced to takeout-only. While some state occupancy restrictions have eased, tables must remain six feet apart, and that limits how many reservations can be guaranteed. A spree of Mother’s Day bookings began weeks ago.

"I’m turning away reservations," said Peter Hewitson, owner of Uncle Bacala’s in Garden City Park. "I can’t even count how many big tables I turned away."

Lulu Kitchen & Bar in Sag Harbor has 150 to 160 reservations for brunch, with at least 100 more coming for dinner, said executive chef Philippe Corbet. "Weekends have been really, really busy. Saturdays and Sundays are busier now than they were in 2019."

Given the pandemic, River Mill Tavern’s chef and co-owner Frank Pignataro was "a little skeptical" about how his offer of a three-course Mother’s Day menu would be received at the Lynbrook eatery. "But as things have opened up during the last month, people have pounced on it," he said. "Unfortunately, I’ve had to turn people away."

In Williston Park, Copperhill co-owner Bari Kearns is thrilled that the restaurant is sold out for the holiday. A new 60-seat dining oasis in the driveway, decorated with string lights and planters, attracted loyal regulars and a surprising number of new customers, she said.

"While Mother's Day is always busy, this year the heavy bookings are especially sweet given the hard work it has taken to maintain and even grow the business during the pandemic."