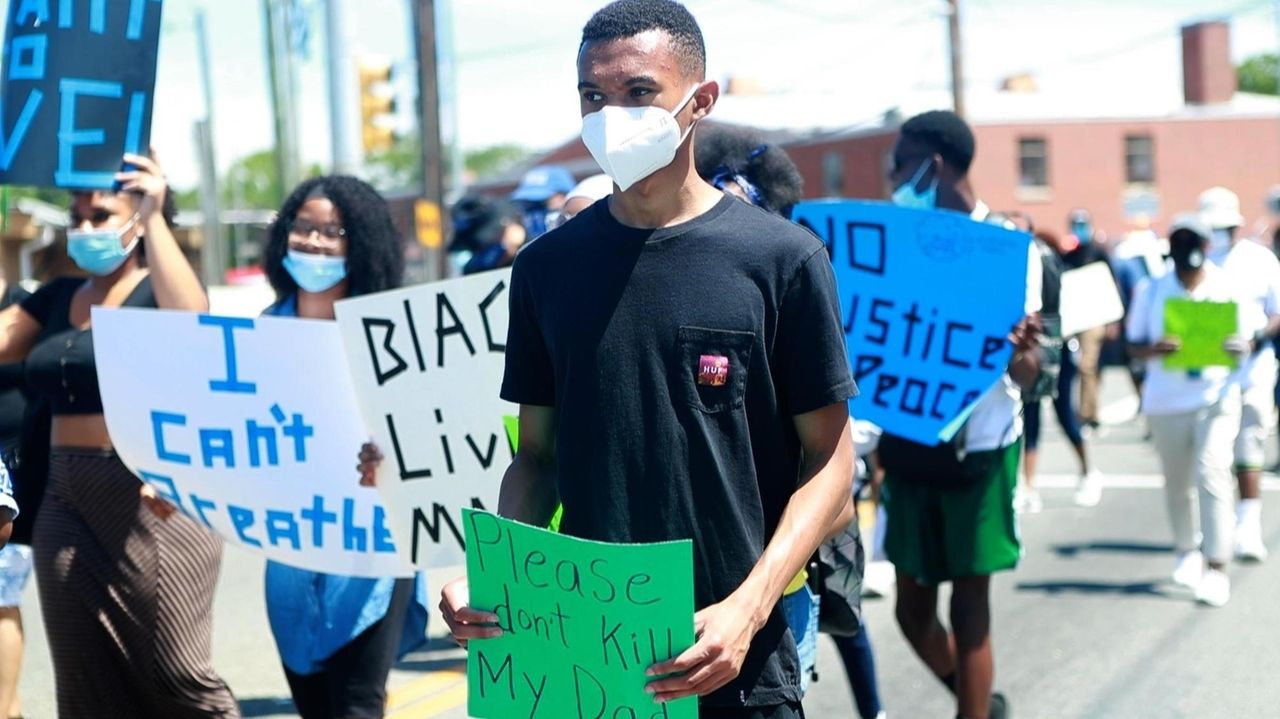 For three hours on Sunday, protesters walked from Freeport to Roosevelt and back, almost four weeks after George Floyd was killed in Minnesota. Credit: Newsday / Raychel Brightman

Outrage over police violence against African Americans spurred more activism on Long Island Sunday, with protesters marching peacefully across Freeport and Roosevelt to demand law enforcement reforms and justice for those killed by police.

With demonstrations nationwide nearing their fifth week, speakers at the local march urged protesters to be persistent in calling for reforms and to gird for a potentially long fight in their efforts to end systemic racism.

“Our forefathers, they fought,” Frank White, pastor of Zion Cathedral in Freeport, said to around 100 marchers. “I want to say to us, on this Father’s Day, we have to keep on fighting.”

The marchers wound their way through the commercial districts and quiet residential streets of Freeport and Roosevelt, with onlookers gathered on porches to cheer or raise their fists in support. Marchers chanted for justice and recited the names of African Americans killed by police. One man carried a sign that read “please don’t kill my dad.”

In speeches, political, civic and religious leaders encouraged protesters to get involved in government through voting and running for office. And they reflected on the significance of Father’s Day in the context of the widespread activism that has followed the police killing of George Floyd, an unarmed African American man, in Minneapolis last month.

“George Floyd is not here to celebrate Father’s Day with his children today,” said Anissa Moore, a Long Beach City councilwoman. “In spite of everything that black men have had to suffer, they are still standing strong.”

In Jericho, another protest went on Sunday, with people lining North Broadway in the summertime heat, holding signs and chanting.

Like the gathering in Freeport, it was calm but spirited. Of the dozens of protests that have gone on across Long Island since Floyd's death, there have been just a handful of arrests.

In New York City, where further protests were planned on Sunday, Mayor Bill de Blasio barnstormed, via video, through black church services in Brooklyn and the Bronx. He praised Albany’s repeal of 50-a police secrecy law, which will now allow the public to see which officers are or aren’t disciplined and how. He also lamented the racial disparities of the coronavirus’ impact and promoted his South Africa-inspired racial equity commission.

The commission “literally will say where that institutional racism is in this city, where the systematic efforts to exclude and discriminate reside and how we break it down. And then we get to the work of making the change,” de Blasio said at one of the three appearances, to Brooklyn’s Clarendon Road Church, via Facebook video.

The Freeport protesters eventually made their way to the intersection of Babylon Turnpike and Nassau Road in Roosevelt, where a statue of George Jones stands. Jones, who died in 2016, was a black Roosevelt resident who fought in World War II and the Korean War, served in the New York City Fire Department at a time when few African Americans did and worked for Nassau County for 30 years.

Standing before the statue, G. Dewey Smalls, of the National Action Network, noted that a new generation of activists is leading the current wave of demonstrations across the country. He pressed them to continue.