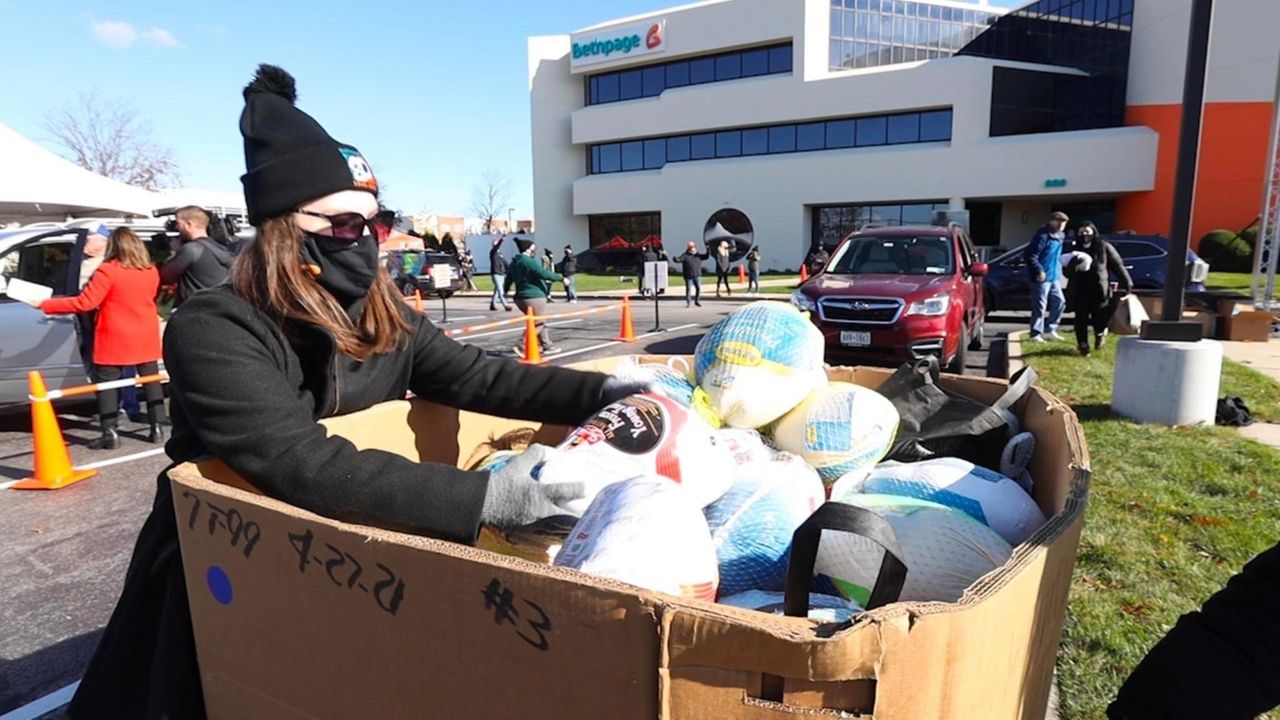 John Townsend pulled up to the loading spot at Island Harvest Food Bank's Melville warehouse on Nov. 11 and popped open the hatchback of his car so volunteers could load the 20 frozen turkeys he was picking up for Resurrection House.

Resurrection House, in Wyandanch, provides emergency shelter, a food pantry and other services to families and is gearing up to help people in need this holiday season. Though the need for donated food is not quite as high as it was during the worst of the COVID-19 pandemic, food bank executives say food insecurity still remains a big problem on Long Island.

To receive assistance or to volunteer, contact Island Harvest at Islandharvest.org, or call 631-873-4775.

"A lot of people fell into hardship," said Townsend, a maintenance worker for Resurrection House. He said Island Harvest's contributions are "a beautiful thing. It's needed. It's definitely needed."

Townsend planned to come back to Island Harvest, and the region's other food bank, Long Island Cares, in the coming days for more turkeys and trimmings to distribute to families for Thanksgiving. The food banks serve hundreds of member agencies and hundreds of thousands of Long Islanders.

Food bank executives said there were unprecedented increases in emergency food distribution during the height of the pandemic last year. They also noted they were aided in purchasing more food with money from federal, state, county and municipal governments, as well as corporate donors.

"We more than doubled the amount of people that we helped" over a year's time, said Randi Shubin Dresner, president and chief executive of Island Harvest. "We helped more than 600,000 families from March 2020 through spring of 2021."

In the past six months, Pachter said, there has been a decrease in people coming to the food pantries Long Island Cares services, an 18.7% decline from last year, or a drop of 7,438 in visits.

"I think there’s a few things in play," Pachter said of the decrease. "The first would be that there is a segment of the population that we’ve supported during the first year of COVID that are returning to work in the past six months … as businesses are beginning to return to normal operations, especially in the restaurant business. Restaurants that were operating at half capacity are operating to near full capacity, reducing the need for emergency food support."

Nevertheless, he said, the need for emergency food remains great.

"I don’t think 20 years ago you would imagine a need for a food pantry in the Bethpage community that’s being utilized by people not only in Bethpage, but in Hicksville, Farmingdale and Levittown," Pachter said. "Those are not areas, historically, where people utilized a food pantry."

Pachter said that while some of the people who come to food pantries are not in extreme poverty, "They're people who are struggling. There are more people than we imagine on Long Island living paycheck to paycheck."

Dresner said not everyone is back to work, and among those who are working, some are struggling. "Many tell us they are still trying to pay off the bills for many months when they were out of work," she said.

"We’re not even through with the pandemic. Now we know there’s another layer of stress a lot of people in the community are feeling, trying to get their feet on the ground … Will they be able to have special holiday meals for family? For many, it’s not just a holiday situation, it’s an ongoing situation."

Dresner said Island Harvest's goal for Thanksgiving was to distribute 17,000 turkeys, but added the food bank still needs help from the community. She noted that every Tuesday is Turkey Tuesday, with drop-off locations at every Panera Bread and QuikChek on the Island, and Monday through Friday at Island Harvest's warehouses at 126 Spagnoli Rd., Melville, and at 875 Jerusalem Ave., Uniondale. An annual turkey drive was held Friday at a Bethpage Federal Credit Union location in Bethpage.

Pachter was concerned last week about his food bank's ability to provide member agencies with all the turkeys requested, about 8,000. But on Tuesday, he said the agency had about 8,600 turkeys in hand.

The food insecurity has led the food banks to institute new programs — as they try to address the root causes — through education and job training opportunities.

"We learned a lot during the pandemic, so we're continuing some things, like community distributions, working with school districts, and home deliveries to seniors and veterans," Dresner said. "The pandemic was a horrible situation for all of us, personally and professionally, but out of the pandemic came opportunity for Island Harvest."

Dresner said Island Harvest plans to roll out in 2022 a workforce and skills development institute to help people recover.

"We will be teaching trades and other skills to people who are underemployed and unemployed, providing certificate training programs to help make sure they become more employable," she said.

Pachter said Long Island Cares' new initiatives include the Essential Market in Bethpage, which opened last month, where people can shop for donated food — much as they would in a regular grocery store — but without being charged. He said the market was opened with grants from Nassau County, the Town of Hempstead, Bank of America, Stop & Shop, and Feeding America.

Two women who were at the Essential Market on Nov. 11 filled two shopping carts with fruits, vegetables, meats and household items including diapers and paper towels. They were aided by a volunteer who told them how many items in each food category they could receive, according to their family size.

Others came to the market to donate Thanksgiving trimmings as part of Long Island Cares' Adopt-A-Family program.

"I think that's the best part. There are so many people who need help, but if you can concentrate on the people closest to you, that's a start," Finley said.

Another initiative Long Island Cares launched this year was its "Community Engagement Center" — financed through a variety of foundation grants — where educational workshops for a cross-section of member agencies, including food pantries, soup kitchens and human service agencies, are held to explore the correlation between poverty and food insecurity.

Long Island Cares also is reaching out to "grassroots organizations," Pachter said, providing them with free office space and access to training facilities.