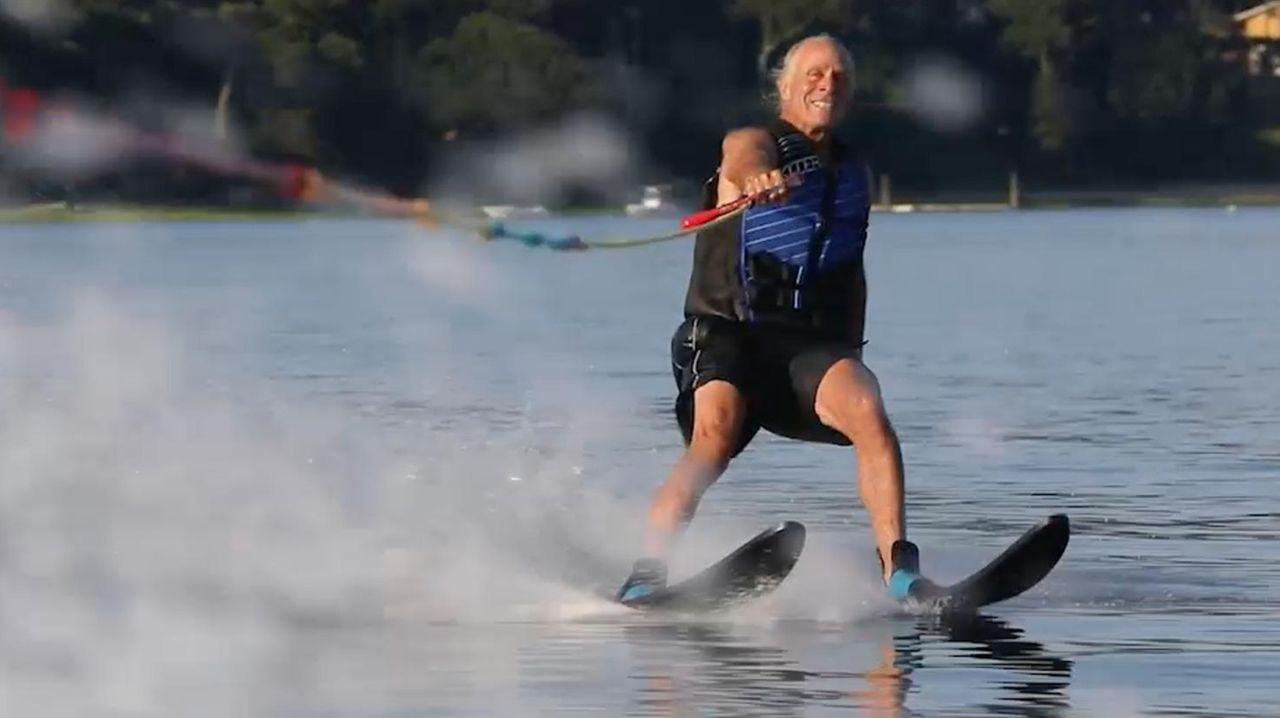 On a recent June evening, the members of the Huntington Waterski Club had its first outing of the year, riding water skis in Huntington Harbor as they have been doing for more than 30 years. Credit: Newsday / Jeffrey Basinger

“Years ago, everybody could just pop up right away on the water on your skis. Now it takes a little longer,” says Stevens, who lives in Huntington Station and has been enamored with the sport since he was 16.

Stevens is the founder and president of the Huntington Waterski Club, a close-knit group of seven members who have a fondness for spending time off land. Eight years ago, they started getting together every good-weather Wednesday in summer to glide across the waters of the North Shore.

On a recent June evening, the club had its first outing of the year. In this club, the rules are loose. No attendance is taken and dues are paid in beer or pretzels. These are longtime buddies who have water skiing in common, but they say they’ll accept new members on a trial basis. To qualify, you have to be in your 60s and know how to slalom ski.

On that evening, there was plenty of daylight. Bound for the designated water-skiing area of Lloyd Harbor (the body of water, not the village), Stevens meets at the Harbor Boating Club in Halesite with Dave Guichard, 63, of Holbrook, a Kings Park school district bus mechanic, and Jerry Nigro, 69, of Huntington, Stevens’ brother-in-law. Stevens used to trailer the boat and launch it from the Mill Dam Marina in Huntington on Wednesdays until Labor Day but, this year, he joined the Harbor Boating Club and parks in a boatslip.

They load coolers of Coors Light and Sam Adams beer onto Stevens’ nameless 23-foot Supra ski boat, he bought 30 years ago. It’s in the low 80s and the water is at least 10 degrees cooler, as Stevens backs out of the slip and heads through Huntington Harbor, turning west at the Huntington Harbor Lighthouse.

About 20 minutes later, there’s a quick stop at a Lloyd Harbor dock to pick up Gordon Kerner, 68, of Huntington, a food distributor. For the next two hours, in a sheltered section of Lloyd Harbor, surrounded by salt marshes and green hills dotted with mansions, they’ll relive the joys of a carefree youth until the sun sets.

Golf and fishing are probably the more popular activities for guys their age, but the members of this club prefer the physical challenge of getting towed across the harbor. “It’s phenomenal. You feel like you’re flying,” Guichard says of the sport. “It keeps us friends, it keeps us busy, it keeps us young.”

Wearing shorts and a life jacket, he is the first in the water and takes hold of the tow rope. Stevens goes full throttle, providing momentum for Guichard to get up on the water’s surface.

Guichard makes it look easy, but his friends say it’s not. He cuts back and forth across the boat’s wake to ride the smooth harbor surface on either side. Raising the level of difficulty, Guichard prefers to slalom, using only one ski, as Stevens keeps his speed at about 26 knots, or nearly 30 mph.

A few minutes later, Guichard drops the tow rope. He’s done. He climbs onto the stern and sits there, dripping. “For the first run of the year, that felt pretty damn good,” he says.

Most of the club members learned to water ski as teens in the waters of Huntington Bay, Northport’s Duck Island or Lloyd Harbor. “When work and family took precedence, recreational water skiing went by the wayside,” Stevens says. He adds, “But now . . . we have a little more time for the roar of the engine, the saltwater spray in our eyes and the wind whistling through our salt-and-pepper hair.”

A minimum of three club members is required each week — a driver, a skier and a spotter to let the driver know when the skier has dropped the tow rope. They ski to a rock and roll soundtrack on Stevens’ iPod, which holds 30 years’ worth of Billy Joel and The Beatles classics. “Sometimes we play ‘name that tune,’ ” Stevens says.

Growing up in Colorado, a friend with a boat invited Stevens to try water skiing at Cherry Creek Reservoir in suburban Denver. “I fell in love with it,” he says. “It’s so exciting when you are going like 32, 34 miles an hour. It feels like you’re going 60.”

Stevens’ introductory outing became a lifetime obsession after he met his future wife, Linda, in 1968. Both were students at Colorado State University in Fort Collins. “At the end of that spring semester, Linda headed back to Long Island, and I headed to a summer job for college students in Las Vegas, Nevada,” Stevens says. “It’s also where I learned to water ski at Lake Mead near the Hoover Dam with a whole gang of college-age guys.”

He graduated in 1969 with a bachelor’s degree in data processing, and after serving three years in the U.S. Army during the Vietnam War, including 18 months as a computer programmer at the Pentagon, he married Linda. They moved in 1972 to Linda’s hometown of Huntington Station and raised their three children to love boating and water skiing.

“I was happy that he enjoyed water skiing, never imagining that it would last until age 70,” says Linda, who is also 70. “They have a great time just being out on the water,” she said of the club members.

Guichard met Stevens and Nigro in the late 1970s when he serviced their company’s vehicles. He’s a handy guy to have around when the boat has mechanical troubles, which has happened more than once, Stevens says.

Water skiing is a family tradition for Guichard. He grew up in Huntington, graduated from Walt Whitman High School in South Huntington, and began skiing at age 15 in local harbors. His wife, Debbie, 58, and their four children, learned to water ski behind the family’s 18-foot Larsen runabout. “If they are going to be with me, they have to ski,” Guichard says of his children. “And at my age I’m trying to leave it [the boat] to the kids to take over.”

Nigro, who takes the next turn in the water, easily gets up on two skis. He says he’s not as passionate about the sport as the others, but enjoys their company. He and Kerner, who is known as “Gordie,” have been friends since kindergarten. Both graduated in the Huntington High School class of 1966 when, Nigro says, they first “dabbled” in water skiing.

Nigro’s true passion is ocean sailing. After retiring in 2014 he took his 51-foot sailboat on a 23-day trip to Bermuda, the Azores and Lagos, in southern Portugal. He water skis wearing a souvenir wrist band from a voyage earlier this year to the America’s Cup in Bermuda.

“If you live in Long Island and don’t appreciate the water, you miss a big part of living here,” Nigro says. Stevens and Nigro are both retired from a family-owned vending business in Huntington Station, which closed five years ago.

When it’s Stevens’ turn, he enters the water behind the boat and grabs the tow bar, but it’s not his night. After about a half-dozen tries to get up on the single ski and skim the water, he gives up to let Guichard have another run. (Undaunted, Stevens tried again the following week and says he found his sea legs for a lap around the water ski area. “I was happy,” he says. “Once you turn 70, and can still do it, that means something.”)

They’ll end their season in early September with an annual party in Montauk, where they’ll reunite with Mike Daddura, 64, who moved east after retiring last year after 25 years as a supervisor for PSE&G-Long Island. Daddura, who had lived across the street from Stevens for 15 years, has fond memories of his Huntington Waterski Club days.

“You work all week and then within 15, 20 minutes you’re down launching the boat and just hanging out with the guys, talking about bands we’ve seen in concert, and famous lines from movies,” Daddura says in a telephone interview.

As the boat slows to enter the marina, there’s agreement all around that it’s been a perfect day for water skiing, friendship and sunset watching. But there’s an anticipation of sore backs, shoulders and arms that come with the season’s first get-together. “You’re using muscles you didn’t use all year,” Guichard says. “We’ll feel it tomorrow.”

The longtime water ski jocks collect the empties and trash from the boat, secure its cover, and head home. In an email to Newsday’s Act 2 about the club, Stevens wrote, “My good fortune has increased having found a group of friends, at this stage of life, who still want to water ski. As we idle in Lloyd Harbor waiting for the boat wakes to die down, we have the radio cranking and reminisce about the good times we’ve had. For a moment, I feel like I am 19 again.”