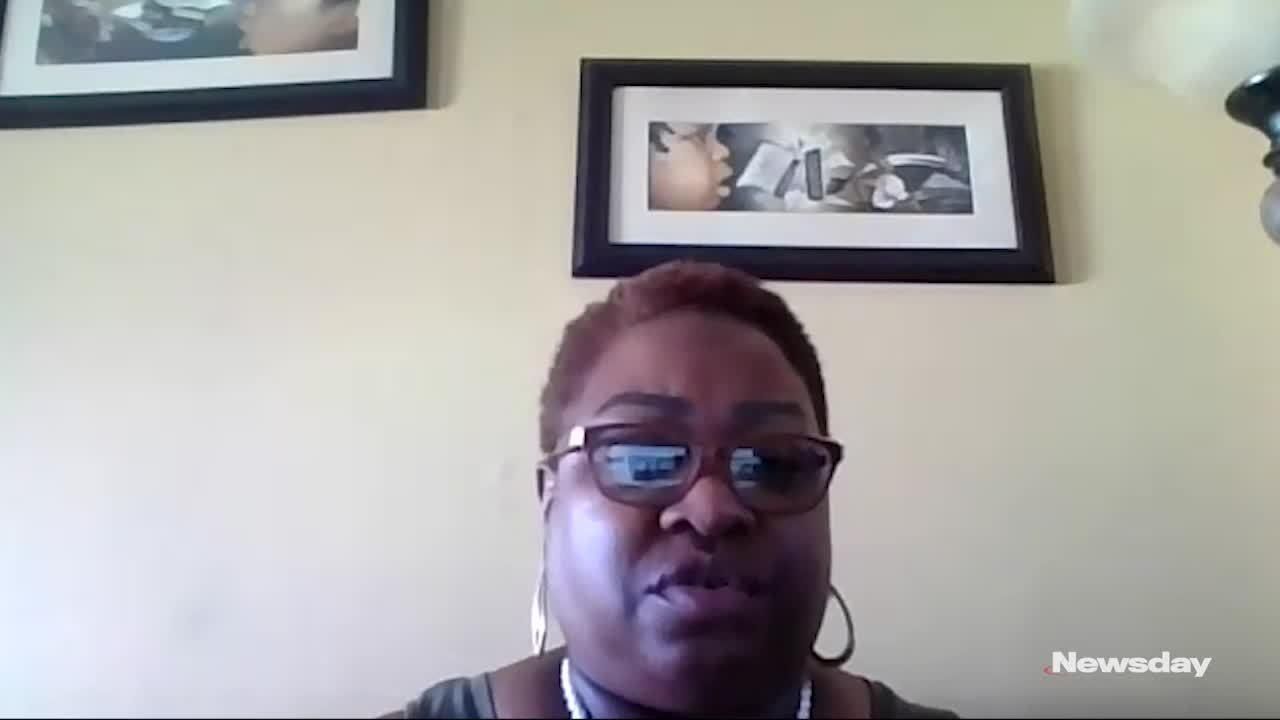 Mark Hugo Lopez, of the Pew Research Center, and Theresa Sanders, of the Urban League of Long Island, talk about the growing diversity within the Black population. Credit: Newsday staff

The foreign-born population among Blacks on Long Island has risen by nearly 50% over the past 20 years, according to an analysis by the Pew Research Center — a development local community activists say points to cultural sensitivities and language issues that service providers must address.

The national report "The Growing Diversity of Black America" highlighted changes in racial identity as well as educational and economic trends among Blacks. It noted a decline in the number of Blacks identifying as only Black, as others identify as Black and another race, or as Black and Hispanic.

At Newsday's request, Pew researchers analyzed census data for Long Island and found the foreign-born Black population was 22% of all Blacks on the Island — or about 55,000 people — in 2000. By 2019, it had risen to 26%, or more than 80,000 people. The change between the two time periods represents a 47% increase.

"It was very clear that we were talking about Black and white issues" during the civil rights era of the 1960s and '70s, said Theresa Sanders, president and chief executive of the Urban League of Long Island. "But now, we're talking about Black Latinx, Black Africans, Black Caribbeans, Black Haitians. We are talking about so much more that goes beyond the simple phrase of being Black. What does that mean culturally, when you're trying to provide services to a family that is Afro-Latina?"

The answer, Sanders said, is for communities and businesses to understand the cultural backgrounds of the different segments of the Black community, and to hire and promote workers who can speak the languages of immigrants.

The Black population — those who identify as Black alone or as part of a multiracial or ethnic background — was estimated nationally at 46.8 million in 2019, the Pew report said, comprising 14% of the United States' population, up from 36.2 million, or 13%, in 2000.

Report offers 'an opportunity to do more'

Tracey Edwards, the NAACP's Long Island regional director, said the report was an "opportunity to gain more insight" and "an opportunity to do more," such as paying attention to immigration concerns some Blacks may have. But Edwards said the overall thrust of civil rights remains unchanged.

"When it comes to the basic needs of housing opportunity and education and health, we all want the same — which is equity," Edwards said.

The report, local community activists said, confirmed some changes they already have seen. The analysis highlighted things they needed to be sensitive to, and reflected the services they provide, especially in a diverse community such as Elmont.

Elmont, according to 2015-19 census data, had the highest foreign-born population on the Island, at 44.7%. A hamlet with an estimated 25,000 residents, Elmont includes about 5,000 with Haitian ancestry, 2,500 with Jamaican ancestry, and about 1,700 with Guyanese ancestry.

Mimi Pierre Johnson, an Elmont community activist and Haitian immigrant, said for many Haitians, understanding its culture is important. For instance, accepting aid is considered admitting failure, even during a pandemic.

"The cultural aspect for the Haitian community is the pride," said Johnson, who has lived in Elmont for 25 years and is founder of the Elmont Cultural Center. "Better to work and know they can take care of themselves and their family."

During the COVID-19 pandemic, when some lost work, she said many had to be persuaded to accept food aid.

"They’re not accustomed to the food bank. To them, that’s a failure of life," Johnson said. "I think our organization was able to change that. We told them those were your taxes helping out in the time of need. Because of the language barrier, secondly they don’t know about some of these resources available. So, I was very happy to have the food distribution so they know it’s OK."

Johnson recalled some immigrants in her community who didn't understand why they should accept an iPad from the school district, not realizing it would be needed for virtual learning during the pandemic.

So, Johnson said, she was excited about being a "trusted voice" in her community to inform Haitian residents about, and take part in, a recent Nassau County Health Department COVID-19 workshop geared to the Haitian community and conducted mostly in the Haitian Creole language.

"My thing has always been, whether it’s with American groups that are working on civil rights and all the other issues we care about, I always think it’s a missed opportunity we don’t reach out enough to the immigrant community," Johnson said.

"It is interesting that within the Black population, we have some of the widest income inequality gaps that exist across major race and ethnic groups," Lopez said. "Asian Americans have a larger one, but that gap has grown among Black Americans in recent years. It highlights again the diversity of experiences economically within the population."

Income inequality is something the Urban League of Long Island seeks to address, Sanders said.

"A lot of doors have been closed for a long time, and we are now moving toward opening these doors," Sanders said. She said grants and partnerships enable the Urban League to reach out to corporations, as well as set up strategies to help families, as it seeks to close the $22,000 economic gap between the average Black working-class family on Long Island and comparable white family.

"We translated that back in 2017 as the region losing $24 billion a year, because of these racial inequities," Sanders said. "So if we can close inequities, and close this racial gap, that economic gap by $22,000 or $30,000, we’d make Long Island a much better place to live, work and play."

Suffolk gets record $7.2 million payment from OTB
3:19
No criminal charges for many drivers in crashes that kill pedestrians, bicyclists
What we know about the high, broad turnout in the 2020 election
Rep. Zeldin: I won't call Biden election 'illegitimate'
Cops: Body found in burned out car fire in backyard of home
1:38
Divorce attorney for Michael Valva testifies at pretrial hearing
Didn’t find what you were looking for?