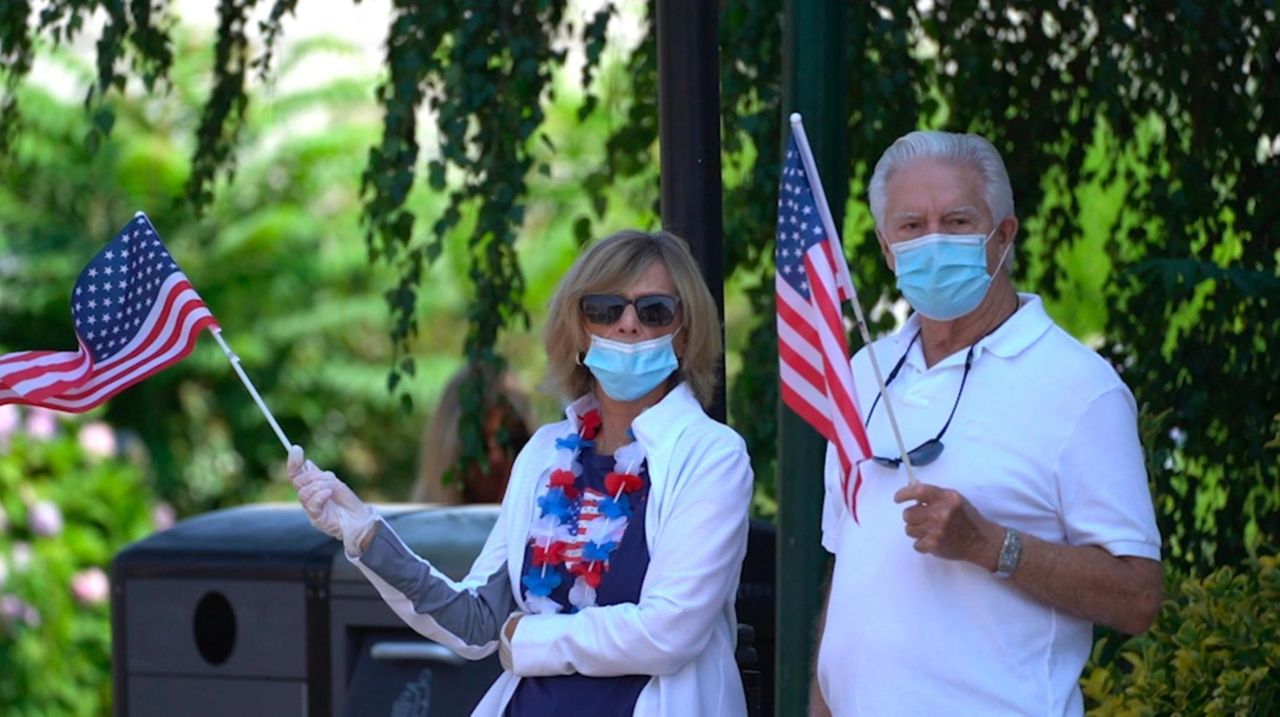 Celebrations varied across the Island for the Fourth of July, as some flocked to beaches. Others protested for a cause. Newsday's Steve Langford has the story. Credit: Newsday / Steve Pfost; Randee Daddona, James Carbone

This story was reported by Dandan Zou, Daysi Calavia-Robertson, Catherine Carrera, Matthew Chayes and The Associated Press. It was written by Dandan Zou.

In car parades, crowded parks and continued protests, Long Islanders found new ways to celebrate the country's founding 244 years ago and to contemplate the nation's future amid ongoing demonstrations that demand racial equality.

As Fourth of July celebrations were canceled or scaled back this year, some parade organizers reformatted the annual event to continue a tradition. Meanwhile, Black Lives Matter protesters marched on in New York City and on Long Island, challenging others to reconsider the holiday's meaning and calling for independence for all. Some in the city called for the holiday to be canceled altogether.

Shanequa Levin, founder of the Women’s Diversity Network and one of about 80 protesters in Hauppauge, said she couldn’t “sit here and celebrate today.”

“Not when my people are being oppressed, when we’re being beat over and over again,” said Levin, 40, of Huntington Station. “This is not my Independence Day! How can you celebrate today, knowing that we’re not truly all free?”

Matthew Ott of North Hempstead, an event organizer, said holding the protest on the Fourth of July was particularly important.

“People have to know and be made aware that our supposed freedom was built on the backs of black and brown people, stolen from their lands and forcibly brought to be enslaved in stolen land,” said Ott, 31.

Charlotte Forrester, 31, said it’s hard to celebrate a day meant to represent freedom in an area as “highly segregated as Long Island.”

“Racism here is so deeply rooted. The history of racism on Long Island is so long and so dark,” said Forrester, of East Meadow. “It’s time to break that illusion of white suburban security. It’s time for change.”

With paintbrushes in hand, about six protesters knelt on patches of grass alongside the building’s parking lot and wrote “we heart Black Lives” in red and blue paint and other mottos in support of the Black Lives Matter movement on a 25-foot-long banner.

Alex Sigalas, 23, of Coram, was painting a colorful portrait of Elijah McClain, a 23-year-old man killed by police in Colorado, alongside the words “Say His Name” on it.

“Being here today is not just about mourning the lives that have been lost but to support the Black people in our communities who are still living,” she said.

A lineup of speakers shared impassioned spoken-word poetry, songs, and speeches. "The darker you are, the more your cry will be ignored,” lamented one. Another shouted “[Expletive] the Fourth of July!”

The group, which dwindled to about 30, marched to Suffolk County’s Fourth Precinct just a few minutes away. There, they knelt in silence for 8 minutes and 46 seconds — the amount of time Minneapolis Police Officer Derek Chauvin’s knee was on George Floyd’s neck, resulting in Floyd's death on May 25.

In Port Jefferson, spectators dressed in patriotic clothing waved American flags as motorcycles and trucks went by during a vehicle parade.

Among them was Joe Marcellino of East Setauket, who said he had marched in the parade for 35 years as a volunteer fireman.

“This is the first year that I’m actually sitting in the parade watching. And it makes me very angry that we are not allowed to march as a whole group,” said Marcellino, who wore a Trump 2020 cap and held a large American flag. “But at least we are here today to support the birth of our country.”

Another socially distant parade took place on the grounds of Old Bethpage Village Restoration, where the Museum of American Armor is located.

The sold-out event featured dozens of military vehicles dating back to World War I, museum spokesman Gary Lewi said. Tanks and other combat vehicles snaked through the parking lot past hundreds of viewers in chairs or in the beds of their trucks as they watched with a smile and thumbs-up.

In Long Beach, five lifeguards were recognized for helping save a man who suffered a spinal injury during a Polar Plunge event there earlier this year.

Their names were Paul Gillespie, John Skudin, Chas Thompson, Cary Epstein and Andrew Healey, according to The United States Lifesaving Association, a national nonprofit that awarded three lifeguard patrol agencies in Long Beach, Hempstead Town and Jones Beach, with which the lifeguards were associated.

Many state parks on Long Island filled to capacity early on Saturday and were closed to incoming visitors and traffic. Heavy rainfall Friday prompted health officials in Nassau to issue swimming warnings in nine county beaches.

The storm water runoff can cause elevated bacteria levels that exceed state standards for bathing water quality, the Nassau County Department of Health said Saturday, issuing an advisory that will be in effect through 7 a.m. Sunday.

Among the beaches affected are the North Shore’s Theodore Roosevelt Beach in Oyster Bay; Laurel Hollow Beach in Laurel Hollow; Piping Rock Beach Club in Locust Valley; Creek Club in Lattingtown; and Centre Island Sound, Stehli Beach and Soundside Beach in Bayville. On the South Shore, beachgoers were advised not to bathe in the Philip Healey and Biltmore beaches in Massapequa.

Over the holiday weekend, various official NYPD Twitter accounts showed people expressing support of law enforcement. Hundreds were shown chanting “NYPD, thank you!” in a rally in Flushing, Queens. Some in the city called for the holiday to be canceled altogether.

Marchers bearing “CANCEL JULY 4TH,” “NO INDEPENDENCE DAY UNTIL INDEPENDENCE FOR ALL,” “WE ARE ON STOLEN LAND!” signs and others supporting the Black Lives Matter movement commandeered traffic lanes of the Brooklyn Bridge early Saturday evening.

The crowd of thousands — mostly white but with other races as well — were led from Manhattan by about a dozen Black men and women with megaphones chanting in call-and-response, backed up by trumpets and brass instruments. Few, if any, cops were nearby, and motor vehicle traffic inched along behind.

The coronavirus put a damper on this year's Fourth of July celebrations in New York, but some things stayed the same. Joey Chestnut and Miki Sudo repeated as men's and women's champions at Saturday's Nathan's Famous July Fourth hot dog eating contest.

Chestnut downed 75 wieners and buns in 10 minutes and Sudo downed 48½ in a competition that took place at an undisclosed location with no in-person spectators. Both hot dog totals were world records.

Officials, including Mayor Bill de Blasio, Sen. Chuck Schumer and former Mayor Mike Bloomberg gathered in lower Manhattan earlier Saturday for the reopening of the Sept. 11 memorial plaza, which had been roped off since mid-March when cultural institutions shut down across the city to halt the spread of the virus.

Family members of people who died in the Sept. 11, 2001, attacks were welcomed onto the plaza Saturday afternoon.

The memorial will be open to the public from 1 to 8 p.m. starting Sunday, with masks and social distancing required. The museum remains closed.