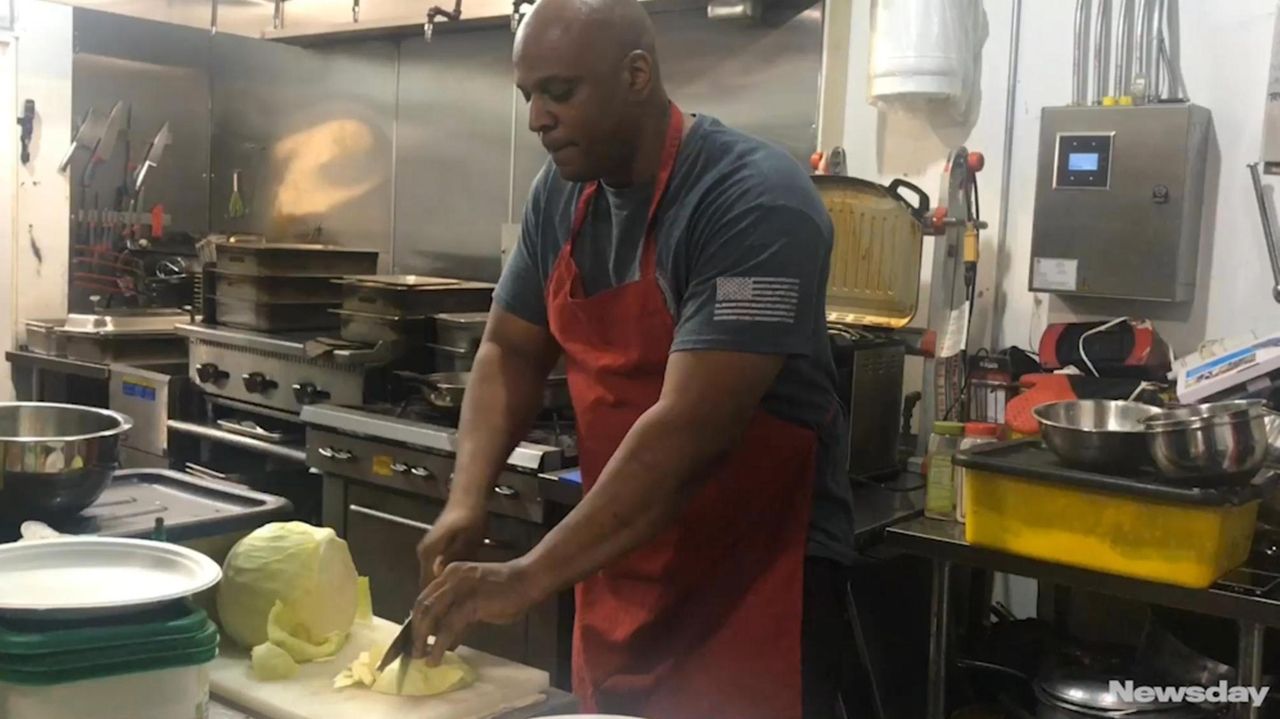 For Bobby Ford, the motto “to protect and to serve” has quite a literal meaning. Those five words would guide his career path — in that order.

The South Shore village is where Ford lives and spends most of his time — either cooking Southern dishes taught to him as a young child by his mother or patrolling the streets.

From age 5, Ford said, he was always in the kitchen with his mother, Elizabeth “Betty” McQueen, who died in 2014. She loved to cook and always took care in the meals she prepared for her nine children, he said.

“Mom always had us as her little assistants,” Ford said. “So each step of the way, with each recipe, we were the ones that were doing the mixing and doing the measuring and following her instruction.”

Subconsciously, Ford said, it resonated with him as he got older. “I realized, a lot of the things that I do, I remember those times in the kitchen with Mom,” said Ford, 50.

But a career in the kitchen would be back-burnered in 1995. At the age of 25, Ford joined the NYPD. He had always been attracted to the profession and saw it as an opportunity to have a positive impact on the community he served, he said. Ford started out working in what would become the NYPD Housing Bureau, which patrols the city’s public housing developments.

While a member of the NYPD, he transferred and became a detective in the Special Operations Bureau, working in narcotics and prostitution enforcement, among other things, in all five boroughs.

In 2005, Ford joined the Freeport Village Police Department partly to be closer to his son, Odin, who lives in the village and is now 14. Switching departments also meant Ford moved from Springfield Gardens, Queens, to live in Freeport, where a salary increase gave him the financial flexibility to open BGF Bobby Q’s. Ford said he did so largely with his savings.

Ford the cop is much like Ford the cook, according to those who know him well, including his sister Tonya Ford and Ronald Johnson, his NYPD partner for six years.

“He was the ultimate example of community policing,” said Johnson, a Columbia, South Carolina, resident who retired as an NYPD detective last year. “He cared about his community and about his profession.”

Johnson said Ford’s passion was infectious. “He was always thinking of what he could do to improve himself or those around him,” Johnson said. “Some people get into this profession for a paycheck; Bobby was there to make a difference.”

Respect is something Ford said he relied on and sought to earn, especially while working in public housing.

He believes there’s a give-and-take dynamic in any career. That includes manning the stove, a responsibility he shared with his sister when he opened his restaurant.

Tonya Ford, 48, shares her brother’s and mother’s passion for cooking. Ford, a full-time nurse, took a six-month leave of absence from her job to help with the cooking at BGF Bobby Q’s. She has since returned to nursing at a Woodmere rehabilitation center.

Tonya Ford said she still helps out at the restaurant from time to time, ready to step in whenever needed.

BGF Bobby Q’s is primarily a takeout restaurant, though the Main Street eatery has counter seating for up to six people, and it is open every day but Monday.

The most in-demand dish is undoubtedly the mac-and-cheese, Bobby Ford said, followed by the collard greens, St. Louis ribs and string beans. The menu is composed of recipes from his mother.

“I incorporated more of a contemporary feel with some other things — but the foundation, the Southern comfort dishes, that’s Mom,” he said.

The restaurant’s website — bbqeastofharlem.com — is an homage to his mother. She was from John’s Island, South Carolina, where Ford and his family would visit during his youth. His mother moved to Harlem in her early adulthood after her family settled there in the 1950s. “East of Harlem,” then, is a nod to both the first New York neighborhood she called home and Freeport.

“I’ve always been that individual to have one thing going on and then segue to something else,” Ford said. “Because it just keeps your mind healthy when you’re constantly learning and appreciating and exploring.”

His next order will find him on the Nautical Mile. He will debut some of his barbecue flavors at his friend Archie Ware’s new restaurant, Backyard Barbeque, opening next month on Woodcleft Avenue.

“We plan to share the smoking-meat duties and surprise the public with different variations of side dishes,” Ford said. “Our journey through life was meant to be flavorful — we want to re-create that backyard barbecue experience.”