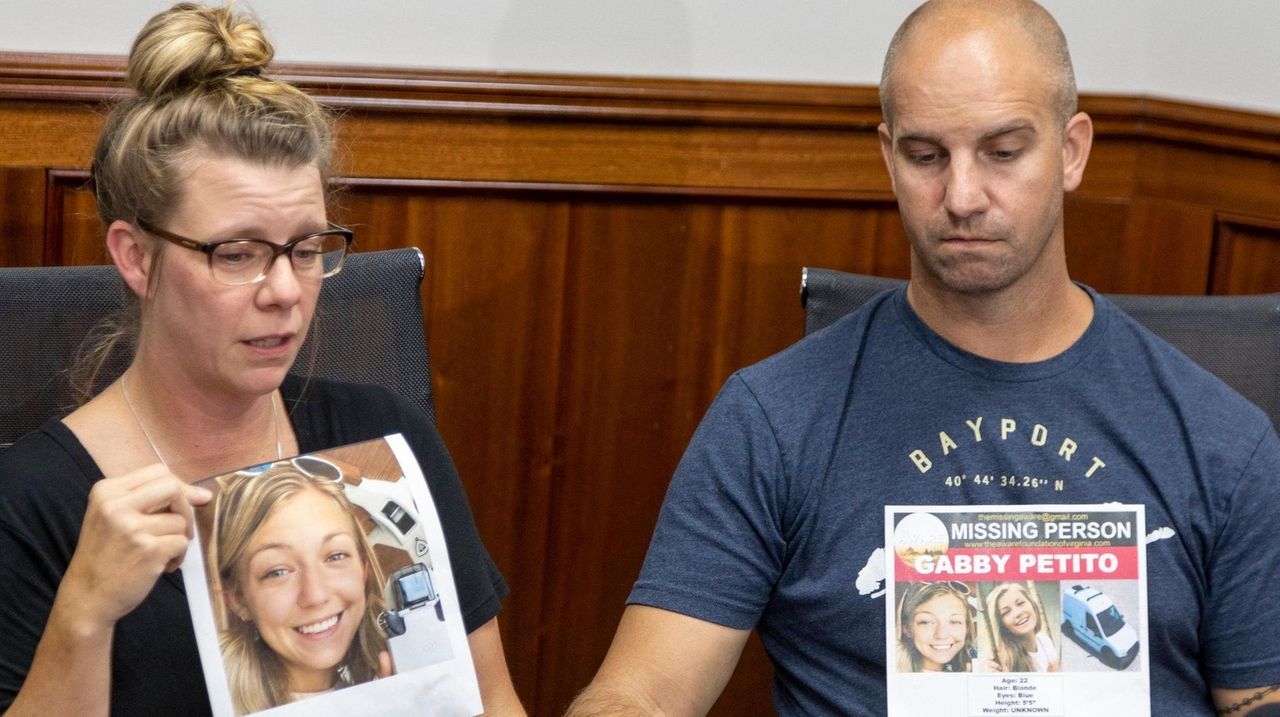 Authorities in Wyoming and Florida on Saturday conducted separate searches of vast parklands for Gabrielle Petito, the Blue Point native who went missing during a cross-country trip, and her fiance, Brian Laundrie, whom police have called a "person of interest" in her disappearance.

The FBI said it was searching Grand Teton National Park in Wyoming for Petito, who was last seen in the area in late August before her mother reported her missing Sept. 11.

Late Saturday, the FBI asked anyone who may have seen Petito, Laundrie or her van at the Spread Creek Dispersed Camping Area in the Bridger-Teton National Forest between Aug. 27 and 30 to contact the FBI at http://tips.fbi.gov, or by calling 1-800-CALL-FBI or 303-629-7171.

The FBI, along with the National Park Service, Teton County Sheriff's Office and Jackson Police Department, said on Twitter it was conducting "ground surveys" that are "relevant to the investigation into Gabrielle Petito's disappearance."

"This is an active and ongoing investigation, so we ask the public to maintain distance from any law enforcement personnel, equipment, vehicles, and their related activity for the safety of the public in these remote areas and to protect the integrity of our work," the FBI Denver office tweeted.

At the same time, more than 2,000 miles away, law enforcement in Florida — where Petito, 22, and Laundrie, 23, lived together before embarking on their cross-country camping trip — scoured a large, swampy reserve and park for Laundrie, who police have said returned from the trip alone on Sept. 1 and has refused to answer questions about Petito.

Laudrie's parents filed a missing person's report for their son Friday, North Port, Florida, police said, after he left home Tuesday with plans to go hiking nearby and didn't return.

North Port Police Department spokesman Josh Taylor, speaking to reporters at the scene, said some 50 law enforcement personnel conducted Saturday's search, which included the reserve and an adjacent 200-acre park, according to online video of his comments.

Taylor said police were using all-terrain vehicles, police K-9s and drones to navigate the wet and muddy terrain. Taylor added that police had taken articles of clothing from the Laundrie home to provide his scent to the police dogs.

North Port police ended the search at nightfall, noting nothing was found, and said it would resume Sunday morning.

Police have said Laundrie returned home to Florida alone from the road trip on Sept. 1 in Petito's white van, which police have since seized, and had refused to speak to authorities about Petito. Police have said his lack of assistance has hindered their investigation.

Laundrie family attorney Steve Bertolino, who on Friday said his client's location was "currently unknown," did not respond to a message seeking comment Saturday.

Richard Stafford, the attorney for Petito's family, late Friday issued a terse statement, saying: "All of Gabby’s family want the world to know that Brian is not missing, he is hiding. Gabby is missing."

Petito and Laundrie, graduates of Bayport-Blue Point High School who lived in North Port, had left Long Island on July 2 for a cross-country trip to Portland, Oregon, with stops along the way at various national parks. The couple traveled together in a 2012 Ford Transit van and documented their journey on social media and posted a nearly eight-minute video about their trip on YouTube.

Petito's last known location was Grand Teton National Park in Wyoming in late August, police have said. Petito's family last heard from her by phone in late August. She was reported missing by her mother, Nichole Schmidt, of Blue Point, on Sept. 11 to the Suffolk County Police Department.

Police in Utah interviewed the couple on Aug. 12 after a witness reported a domestic incident.

A 1-hour, 17-minute body camera video, obtained by Newsday through a public records request, showed Petito and Laundrie telling Moab police officers that they had been arguing and got into a physical altercation.

"We've been fighting all morning and he wouldn't let me in the car before; he told me I needed to calm down," a crying Petito tells police in the footage, which was recorded two weeks before she last communicated with her family.

Moab police instructed Laundrie and Petito to separate until the morning and, in an official report, described the situation as a "mental health crisis."

Blue Point native Gabrielle Petito 'loved that van life'She left Long Island in early July with her fiance, destined for the West Coast, with plans to go hiking and camping in some of the country's most scenic locales. The search for answers in her disappearance continues. What happened to Gabby Petito? Key developments in caseA timeline and map of events leading up to and following the disappearance of Gabrielle Petito, the Blue Point native reported missing while on a cross-country road trip with her fiance, Brian Laundrie. Police footage shows LI native after altercation with fiance weeks before disappearanceIn the Moab, Utah, body camera video, police interview Gabrielle Petito and Brian Laundrie on Aug. 12 about the events leading to their physical altercation.     Police: Boyfriend 'person of interest' in woman's disappearance; report says they had recent altercationPolice in Florida will hold a press conference today to discuss the disappearance of Gabrielle Petito, 22, a former Blue Point woman who went missing while traveling on a cross-country road trip.