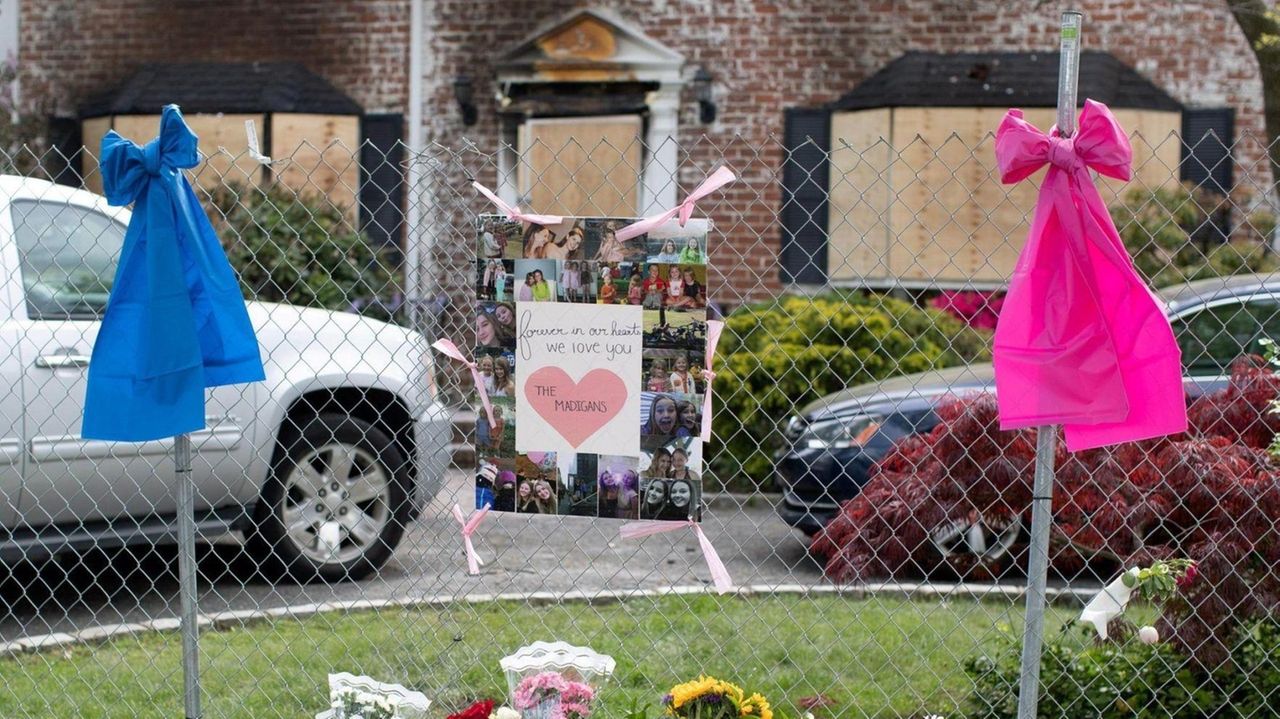 Friends and neighbors tied ribbons and laid flowers in front of the Madigan family home in Garden City on Friday after a fire killed three Thursday morning. Newsday’s Steve Langford has the story. Credit: Kendall Rodriguez

Ribbons line the trees between the Madigan home and the Garden City school that was so central to the family’s life — particularly the daughter and her mom.

For a second painful day, Garden City High School mourned the unexpected deaths of the Madigans, who died Thursday in a fire in their Washington Avenue home.

There was a student vigil Thursday and another Friday night, when about 200 people gathered, some hugging one another, at Warren King Field at the school. Many of those who attended wore a pink shirt, for Molly.

And in the coming weeks, the schools superintendent said in a letter Friday, the district will announce more plans to memorialize the family. Also Friday, the village board of trustees ordered that flags be flown at half-staff in memory of the family, according to a tweet posted by the village government.

The Nassau County Police Department on Friday identified the mother and daughter but have not yet released the name of the 62-year-old man who also died in the fire. But in the letter sent out Friday afternoon, Garden City Superintendent Kusum Sinha said Molly and her parents were the fire’s victims.

"There is no way to capture the tremendous, unimaginable loss that our community suffered," the letter read.

Alison Volpe, head of the district’s Parent Teacher Association, which put up the ribbons, said that Gail had long been involved in the school community.

"She volunteered basically every year, from the time that her kids were in kindergarten. This was going to be Molly’s last year, so this would have been her [mother's] last year," she said. "Her legacy is unparalleled."

The superintendent’s letter eulogized Gail’s volunteerism and music boosterism, and Molly’s passion for singing and performing.

"She was an accomplished musician, performing in our high school chamber and concert choirs, as well as our vocal jazz ensemble," the superintendent's letter said.

Sinha noted that Molly had been selected to be part of the National Association for Music Education’s All-Eastern Choir this year. In 2020 and 2019, she received New York State School Music Association all-state honors. And she was a member of the Nassau Music Educators Association’s All-County Choir for the past seven years.

"I have had the honor of hearing Molly sing on several occasions from her performances to special events," the superintendent wrote. "Her voice was one of an angel."

There were also her extracurriculars: Secretary of the high school’s Best Buddies Club. Peer Educators Leadership member. Badminton. The charity league. And she found time for a part-time job.

"She truly defined the phrase ‘well-rounded.’ Since Molly started kindergarten at Hemlock," the letter said of Hemlock Elementary School, "her smile has brightened the halls of every school she attended. She was loved and a role model to so many of her peers."

The letter recounted how Gail "contributed countless hours" to the community as a PTA president and president of Garden City Friends of Music, "and led our district’s senior citizen tea for the past decade, a beloved tradition for so many in our community."

Said a letter from the PTA: "Gail’s many titles don’t begin to describe the dedication she put into all of her endeavors and the impact she had on the lives of so many students and families. … Gail’s greatest legacy, however, is as a mother. She tirelessly devoted herself to the happiness of her four children, and her eyes would light up with love and pride whenever she spoke about them."

Outside the fire-ravaged house Friday, mourners had placed a photo collage, with the family’s name and the elegy: "Forever in our hearts, we love you."

Arlene Conigliaro of Garden City stopped by to see what remained of the home.

"The whole senior class are all upset," she said. "It’s unbelievable."