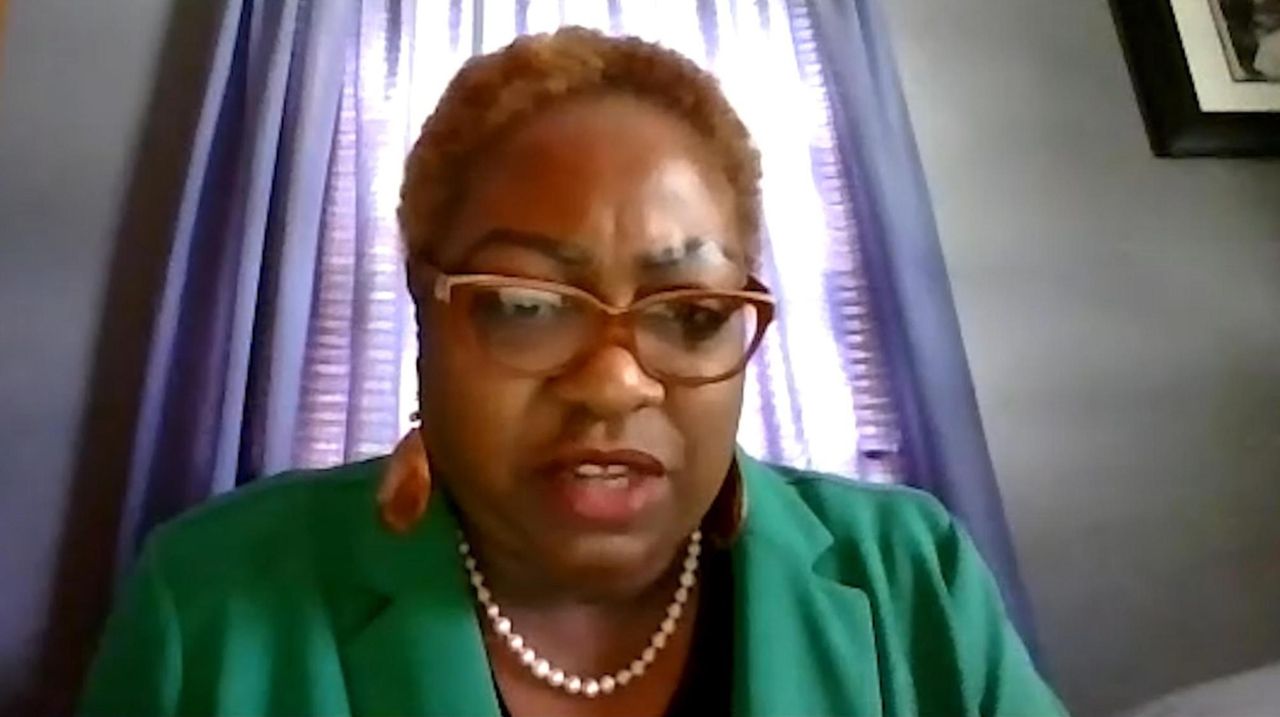 Theresa Sanders, president and chief executive of the Urban League of Long Island, gives her reaction to the death of George Floyd and the subsequent protests. Credit: Newsday / David Schwartz

One Long Island official said it could take decades to repair relationships between communities and law enforcement.

"It was a huge step back in our relationship with the community. It will take years for us to build that trust back with the communities that we serve," said Suffolk Sheriff Errol Toulon, the county's first black sheriff.

He said the video of the death was shocking, both because of Officer Derek Chauvin, who knelt on Floyd's neck for nearly nine minutes, and because the other officers at the scene didn't respond to Floyd's pleas for help.

"As a human being and law enforcement professional, it’s extremely disturbing," Toulon said.

Chauvin, who is white, was arrested Friday and charged with murder in the death of Floyd, who was black, on May 25.

Theresa Sanders, president and chief executive of the Urban League of Long Island, said Floyd's death was the "trigger" that set off the wave of protests in a black community already hard-hit by the COVID-19 pandemic.

She said the protests had been "multicultural, multigenerational. Like America has woken up again, that these inequalities cannot exist. It's an obvious murder. People are tired of it."

She said of protests: "All good citizens need to step up and calm them down. It takes leadership to speak out — not only when they're concerned about stores burning down, but when you see a police officer put their knee on someone’s neck."

She said there's distrust in a system that protects bad police officers, the same as in systems that protect bad doctors or teachers.

"We need cops. We need protections," she said. "This idea that black people hate cops — we hate the bad cops."

She said that her group, along with the national Urban League, is looking at what policy changes to seek. One could be a reform of state law that prevents public disclosure of a police officer's disciplinary records, known as the state Civil Rights Law 50-a.

Tracey Edwards, Long Island regional director of the NAACP, said "we must protest peacefully but we must indeed protest."

“The things that are going on in this country have been going on for decades. Change at best has been incremental. But all of us witnessed a modern-day lynching and that should be enough for everyone,” Edwards said. “This is not new, but at some point it has to be enough, and now is enough.”

She noted that testing sites are set up at minority churches for only one week at a time and that students in predominantly black and Latino districts didn't have the technological tools needed for remote learning.

“We know school districts of color did not have resources such as tablets and Chromebooks in our communities for our students, and yet we’re still dragging our feet to get it done,” she said. “The issue is they (officials) understand what needs to be done, so recovery for us gets us back to where we were, which is still behind.”

Bishop Lionel Harvey of the First Baptist Cathedral of Westbury called the police killing of Floyd an “outrage.”

“What we witnessed was out-and-out cold-blooded murder,” he said. “Every self-respecting American citizen should be appalled.”

Floyd’s death gave shape to a simple message that Harvey said ran through his sermon Sunday morning: “Enough is enough.”

“It's good to pray, and we ought to pray,” Harvey said in an interview after. “But there comes a time where we have to get up off of our knees and we have to rally the masses and let them know that enough is enough.”

Harvey said the officers involved in Floyd’s death should be prosecuted. He called on police departments to improve relations with their constituents.

“You've got to do things to make the community feel that the police are on our side,” he said.

Toulon said he was "not surprised by protests. I am surprised by the looting, vandalism, the disrespect — the blatant assaults on law enforcement," he said.

He added: "Unfortunately, these types of circumstances, tensions are high on both sides. Unfortunately, you have individuals provoking police. And police officers may not respond appropriately."

Rabbi Steven Moss, chairman emeritus of the Suffolk Human Rights Commission and rabbi emeritus at B’Nai Israel Reform Temple in Oakdale, said, "What happened to George Floyd is a most terrible and heinous act, for it really showed the inherent racial treatment even of those suspected of a crime."

About the protests, he said "violence has very rarely achieved the ends, and therefore those ends are very rarely justified."

Isma Chaudhry, chairwoman of the Islamic Center of Long Island’s board of trustees, said protesters are coming out in the middle of a pandemic because “people are suffering” and elected officials and policymakers have not listened to their needs or instituted change.

“The racial discord in our country has reached a very disturbing point,” she said.

Chaudhry said people need to be empathetic and understand why the protests are happening.

“I’m not for violence, absolutely, in any form. But at the same time, we cannot be insensitive to the fact that people need some kind of expression when they know nothing is being done,” she said.

Suffolk Legis. Samuel Gonzalez (D-Brentwood), who chairs a legislative committee overseeing diversity issues, said the violence against young minorities, such as the George Floyd killing, “cannot continue.” He also said he is “pro-cop” and that some bad apples are to blame. He condemned the violence of the protests: “The violence, I can’t support that, but the cause, I do.”

“I understand you get tired of seeing our men die, minorities die and get treated differently. That does not give you the right to destroy others’ property,” Gonzalez said.

Gonzalez noted that a protest against police violence on Saturday in Brentwood was peaceful and he was “proud” of that.

Demonstrators in Plainview protest police brutalityThe protest remained peaceful while Nassau County police cars and officers lined the street and told demonstrators they were free to protest, but to keep moving. De Blasio, Cuomo: Probe coming into actions of protesters, policeWhile the demonstrations Sunday appeared orderly early in the evening — there were just two arrests as of 10 p.m. — small fires, looting and skirmishes with police took place as the night wore on. Attorney calls for upgrading charges in George Floyd deathThe Floyd family is not condoning violence, but want police accountability and justice, lawyer Benjamin Crump said.