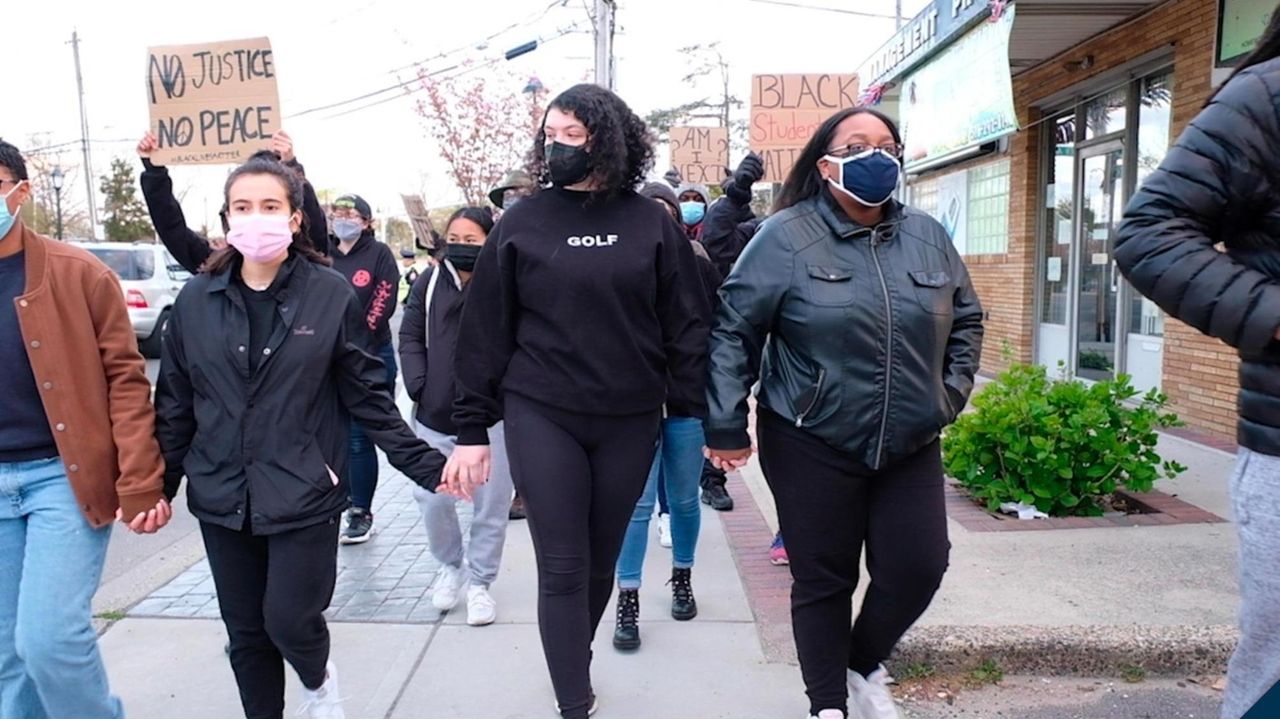 The fatal police shooting of an Ohio teenager — minutes before a Minneapolis jury found a cop guilty of murdering George Floyd — spurred a small but vocal group of protesters in Uniondale on Thursday night to decry another Black person killed by law enforcement.

Many held signs emblazoned with the slogans, including "White Silence is Violence," "Black Students Matter," and "Am I Next?" while standing by the side of the road and eliciting honks from cars driving by.

The protest, which started at about 6:30 p.m. outside the Uniondale Public Library with about 20 demonstrators, had grown to close to 35 by 7 p.m. Demonstrators marched down Uniondale Avenue chanting "When the Black community is under attack what do we do? Stand up. Fight back!" and "Say her name: Ma’Khia Bryant!"

The group turned out to demonstrate against the Tuesday fatal shooting of Bryant, 16, by a Columbus, Ohio, police officer. Shortly after the shooting, Columbus police released body camera footage of Officer Nicholas Reardon opening fire, hitting Bryant four times as she swung a knife toward another girl.

Northport resident Dyane Davies, 52, marched Thursday while holding a sign above her head that read "#EndPoliceSportKilling (s) Trend it!"

"George Floyd’s murder opened my eyes," said Davies, who is white. "Any person who wasn’t outraged by that, I had to cut ties with."

Nearby, Nassau County police officers stood watch alongside the noisy procession, occasionally hearing jeers from some of those marching.

Demonstrations have continued in Columbus and other parts of the country since the shooting, with many noting its timing — just 20 minutes before a jury found ex-Minneapolis cop Derek Chauvin guilty of murder in Floyd's death last year after kneeling on his neck for more than nine minutes.

Five weeks before the one-year anniversary of Floyd's death, there was a familiarity to Thursday night's protest in Uniondale. Terrel Tuosto was there, along with the signs and demands for racial justice and police reform.

The West Hempstead resident and co-founder of Long Island Peaceful Protest, a racial justice group he helped start after watching a bystander's video capturing Floyd's last moments, has spent the past year organizing rallies against police brutality, first to protest Floyd's death, and again after other cases of Black people either killed or beaten by law enforcement across the country.

Bryant was a child and should not have been shot at by police, he said.

"The expectation is for police to de-escalate things, to de-escalate dangerous situations," Tuosto said. "But when Black people are involved, that’s just not what happens … for Black people, their lives are in dire danger every time the police arrives on the scene, are we as a society to accept that as normal?"