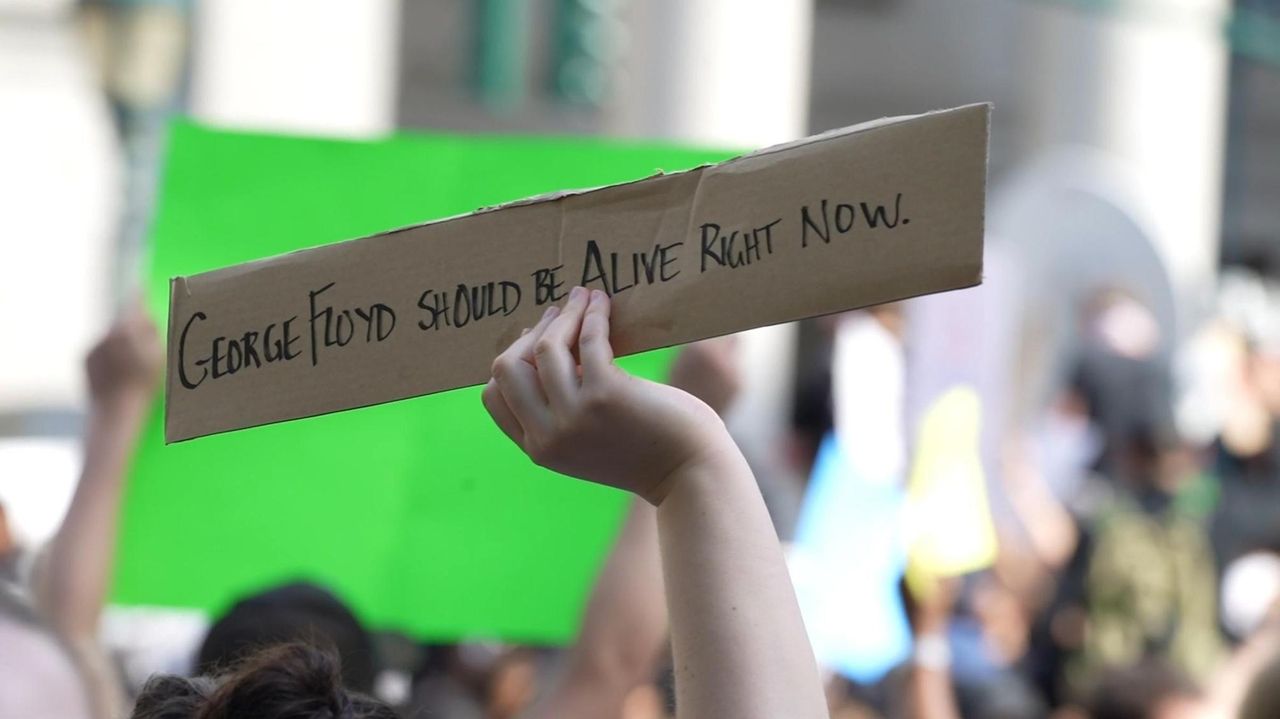 Thousands gathered in Manhattan on Friday to protest police brutality in the wake of the death of George Floyd, who died after a Minneapolis police officer knelt on his neck Monday. Credit: Corey Sipkin

Local officials said Friday they were “horrified” by the on-camera death of an unarmed black man after a Minneapolis police officer kneeled on his neck, and called for prosecution of the fired officer.

Protests and riots have erupted across the country over the death of George Floyd, a handcuffed man who died after the officer kneeled on his neck Monday for nearly eight minutes. Floyd is heard pleading that he cannot breathe, until he stops talking and moving.

Officials on Long Island reacted to the news shortly before authorities announced the former officer, Derek Chauvin, who is white, had been arrested in Floyd's death, and charged with murder and manslaughter.

"I was horrified after watching the video of the death of George Floyd, and hearing his cries,” Nassau County Executive Laura Curran said Friday. “I believe charges must be brought to ensure the accountability and justice all should expect in our nation."

Her counterpart in Suffolk, Steve Bellone, also condemned the death.

“Like all Americans, I was absolutely horrified by the tragic killing of George Floyd at the hands of an officer of the Minneapolis Police Department,” Bellone said in a statement. “I fully expect those involved to be held accountable for their actions and justice to be served.”

Other leaders also reacted with outrage.

"The murder of George Floyd by police is an unspeakable tragedy," said Tracey Edwards, Long Island Regional Director of the NAACP. "Sadly, police brutality against the black community has been an ever-present circumstance since its origin to preserve the system of slavery."

The nationwide uprisings in protest of Floyd's death, she said, are "fueled by systemic racial issues that have been ingrained in the fabric of this nation for decades."

She called on people to protest peacefully, and "most of all, we must vote in November."

Gov. Andrew M. Cuomo called the killing of Floyd “repugnant” and says he “stands with” the protesters.

At his daily briefing typically focused on coronavirus, he read a list of blacks brutalized or killed by police under questionable circumstances, going back as far as Rodney King in Los Angeles in 1991, Abner Louima in Queens in 1997, and Eric Garner in Staten Island and Michael Brown in Missouri in 2014.

Suffolk County Police Commissioner Geraldine Hart also said she was “horrified” by Floyd’s death, which she called “unnecessary and tragic.”

“These officers took an oath to protect and serve and it is an outrage that with the actions of an officer and the inaction of three of his fellow officers, his life was ended,” she said.

She said Suffolk police had “worked tirelessly” to strengthen their relations with minority communities.

Although there were no protests on Long Island, officials were on alert.

Hart said the department was monitoring the unrest in Minneapolis and did “not anticipate similar protests here. We urge anyone who wants to express their feelings to do so peacefully.”

Nassau County police said they had been monitoring social media and increasing patrols near shopping centers where they say there had been threats of possible looting. Those threats never materialized.

Some departments including Nassau said they have guidelines in place for restraining people and avoiding violence.

Nassau cops "are trained under the law to use reasonable and necessary force which is dependent on the level of force that is being used," Nassau police spokesman Det. Lt. Richard LeBrun said. "Our department also provides training in de-escalation of force combined with professional communications so that our officers can use all of their skills in an appropriate manner."

There are a number of restraint techniques Suffolk County police recruits are taught — none of which involve placing a knee on a person’s neck, Suffolk police officials said. Once handcuffs are placed on the suspect, the officer does a check for weapons and then places them in a seated or standing position.

A spokesman for the NYPD said that while the NYPD patrol guide doesn’t refer specifically to the use of a knee, the guide prohibits any action considered to be a chokehold, which is defined as anything that blocks or impedes a person's windpipe.

Curran said Nassau “is committed to community policing because it works. Building trust works, and we always strive to do better. We’ll continue to build bridges between law enforcement and the communities we serve, and use this tragic moment to renew and strengthen engagement and understanding in our communities."

Bellone said police officers themselves were repulsed by the killing in Minneapolis. “I can also tell you that every law enforcement professional across the nation is just as sickened by this disturbing incident as well."

In Manhattan, protesters took to the streets Friday for a second day in a row.

"Please remember that we're in the middle of a pandemic," the mayor urged. "We have to do all we can to protect each other."

NYPD Commissioner Dermot Shea said there were thousands of officers deployed throughout New York City in anticipation of the demonstrations.

De Blasio says he understands that there is anger over what happened in Minnesota: "He was killed because he was black."

Later in the evening, marchers headed over the Brooklyn Bridge, chanting, among other things, “how do you spell racist? N-Y-P-D!”

Thousands marched on Flatbush Avenue in front of Brooklyn’s Barclays Center on Friday afternoon into evening. The venue — home in ordinary times to the Nets, concerts, boxing matches and other entertainment — was surrounded by police in uniform and plainclothes. There were skirmishes and clashes, and several people were detained.

A spur of the protest splintered toward Bedford Stuyvesant; others went to the 88th Precinct in Clinton Hill. Like other precincts, it was cordoned off.

As of 8:55 p.m., the NYPD had detained at least nine people, no charges yet, at the various protest sites, according to Officer Jason Correa, a police spokesman.

Late Friday, an NYPD spokesman said officers had made "dozens of arrests" in Brooklyn but the number could change because it was a "fluid situation."

Some demonstrators tried to enter the 88 Precinct building but were kept out, so they proceeded to the 79th Precinct, both in Brooklyn, the spokesman said.

The NYPD borough commander had called a Level 3 mobilization, said the spokesman. Another law enforcement source said that kind of mobilization is usually only seen in cases where a cop is shot, something that has not happened. A Level 3 pulls in up to nine officers, including a sergeant, from all city precincts, a number that could reach more than 600 extra cops in riot gear. The mobilization level could change later in the night.

One police van was set afire in Brooklyn on Friday night and there were reports of police being struck by objects thrown by the crowd. One officer broke his leg and had to be evacuated by other officers, the law enforcement source said.

None of the restraint techniques taught to Suffolk County police recruits involve placing a knee on a person’s neck. The information was incorrect in an earlier version of this story.