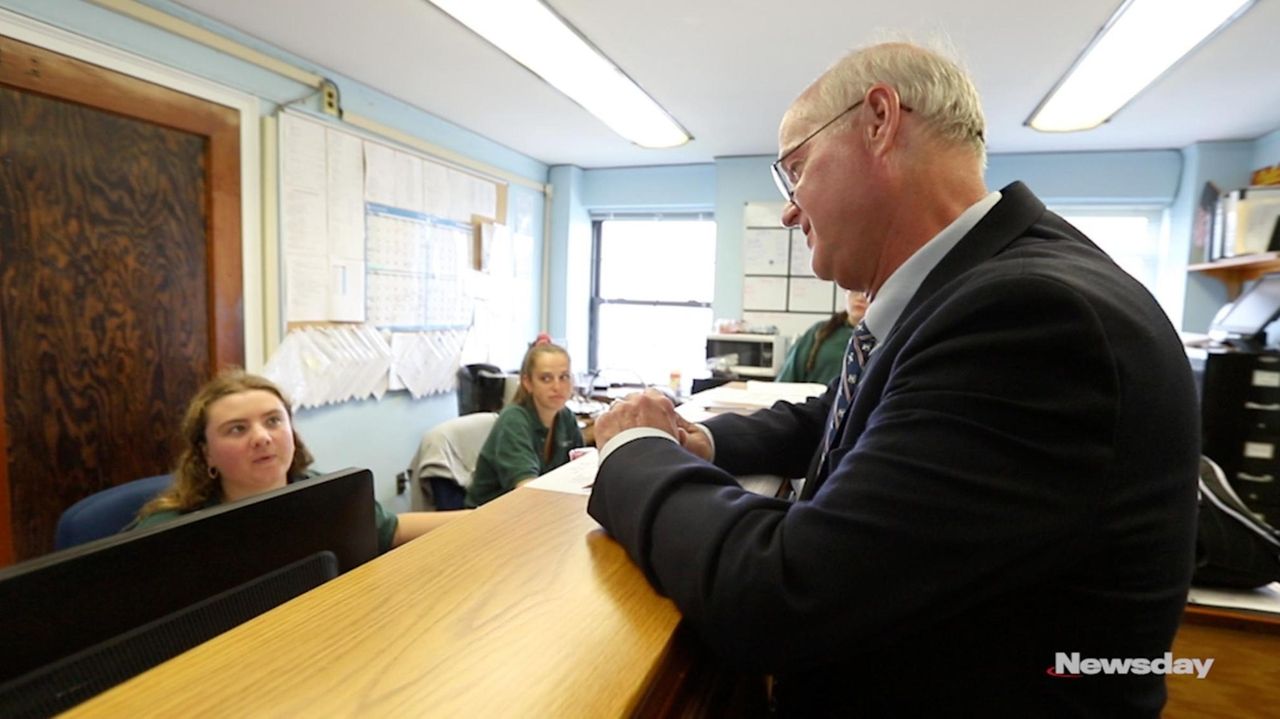 George Gorman, recently promoted to NY State Parks regional director, got his start as a summer employee at Jones Beach. Since then he has directed the Bethpage Air Show, the PGA championship at Bethpage State Park, and overseen renovations to Robert Moses State Park.  Credit: Linda Rosier

Picture all of the Island’s state parks, visited by 25 million people last year, with fewer concerts and firework shows.

And what if the parks became more rundown because they lacked support from nonprofit groups? Or if they didn’t reopen by Memorial Day 2013, just months after getting walloped by superstorm Sandy?

Then contemplate the possibility of problematic renovations, mishaps at the PGA Championship or even a lifeguard strike.

Who should be credited for these successes and avoiding these failures?

Four decades ago, he began his career, like many a state park manager, as a summer employee, scraping gum off theater seats and picking up trash at Jones Beach.

“I love my job, obviously — the atmosphere, the employees, the public, the park visitors. It really is an enjoyable job, interacting with the public, helping them, providing great customer service,” he said.

“And people thank us for it; they really appreciate everything we do. Long Islanders love state parks and state park beaches, so we couldn’t be more fortunate.”

Despite Long Island’s storied history in aviation, it had a fairly slim tradition of performances by military jets in recent decades.

That all changed in 2004 when Gorman founded the Bethpage Air Show he also directs.

For the 75th anniversary of Jones Beach, Gorman said, “we wanted to do an event that would be a world-class event for a world-class facility.”

Gorman secured the show's sponsor — Bethpage Federal Credit Union — just as he would do later with Astoria Financial Corp., now Sterling Bancorp, for the Independence Day fireworks at Jones Beach.

Happily, the Blue Angels came calling; they had an opening in their schedule on Memorial Day.

That weekend, Gorman told them, would be perfect because the air show would draw visitors despite the often cool late spring weather.

Though the park itself offers some ideal flying conditions — almost the only vertical hazard above miles of ocean and beach is the park’s 231-foot water tower — Jones Beach is part of the approach for Kennedy Airport.

Putting on the air show required Gorman to master countless subjects, from working with Northeast bases to help the military get its equipment to fulfilling the numerous requirements imposed by myriad aviation and law enforcement bodies.

By then, Gorman had risen to director of operations for Long Island state parks, having progressed through the ranks, studying carpentry, plumbing, electrical and heating systems, learning how to apply pesticides, and becoming an emergency medical technician.

“I started right from the basement to work my way up,” he says. “Throughout my career, it’s been a learning experience.”

“This is a man who really knows how to get things done, he really is a visionary in accommodating the public in what they are looking for in the parks — and absolutely delivers every time we need him,” said Eric Kulleseid, state parks commissioner, who has worked with Gorman for a dozen years or so.

Air boss Wayne Boggs, who commands all the show pilots, says Gorman makes his job easy though the Jones Beach air space is much more complicated than most others.

“He’s a great man; I’m a better man for knowing him, the way he leads and takes care of things, you can learn a lot by watching other people.”

Lifeguards credit Gorman with healing years of friction that festered after a 1971 strike; he also found a way to peacefully send feral cats living at Jones Beach to a refuge.

Kulleseid and Sue Giuliani, the former director of Jones Beach, who has known Gorman since their days as summer employees, both touched on another characteristic: Gorman’s dedication.

“He eats, breathes and drinks and sleeps state parks all the time,” said Kulleseid.

“One of the best things is that he’s always available; he’s always been somebody you can count on,” Giuliani said.

Having done so many of the jobs he now calls on his 2,500 employees to do, Gorman sees his role as ensuring they have the tools for success.

“We are extraordinarily fortunate; our staff are like me; they love the parks they work in, they are dedicated and hardworking,” he said.

For the past several years, Gorman has been chiefly responsible for overseeing Long Island’s share of Gov. Andrew M. Cuomo’s $1 billion, 10-year investment in state parks to counter years of severe underfunding that pushed some parks to the brink.

Between 2011 and 2016, about 350 Long Islanders outlined complaints to park and elected officials in emails and letters, describing bathrooms at Robert Moses State Park as a “disaster,” detailing a design flaw that routinely flooded some renovated showers at Jones Beach, and decrying overcrowding, trash and other unsightly or hazardous conditions at the Island's state parks, records obtained by Newsday show.

Now he can point to a host of successful upgrades. Here are some: the new Boardwalk Café, the renovated West Bathhouse, upgraded restrooms, a zip line and bike path at Jones Beach, a wetland at nearby Captree State Park, cottages at Riverhead's Wildwood State Park and East Islip's Heckscher State Park, which also reopened its campground for the first time in a nearly a decade, new bathrooms and solar panels at Robert Moses, an improved entrance to Lloyd Harbor's Caumsett State Historic Park Preserve, and new picnic areas and upgrading parking at Smithtown's Sunken Meadow State Park.

Gorman still answers his correspondence. “I handle nearly every single complaint that occurs or an inquiry that takes place when somebody was upset about an action we take.” Answering them, Gorman says, alerts him “if something is occurring that we need to know about to correct.”

While some managers might prefer to have subordinates respond, “I love interacting with people,” he says.

As regional director, Gorman said he had to carve out time for more plaque unveilings and other ceremonial roles he had always been happy to let politicians handle — without losing his focus on the job at hand.

“The main thing, when I end up my career, is to make sure I leave state parks better than when I arrived."

Nassau police official: The number of opioid overdoses 'shocked my conscience'
State moves to clear logjam of rent relief applications
1:39
Quogue police: Officer tried to stop speeding motorist moments before crash that killed 5
Petition seeks to bar nonresidents from speaking at school board meetings
Court papers: Former LIRR supervisor pleads guilty in alleged OT scheme
Shea on vaccine mandate: 'We are going to comply with the order'
Didn’t find what you were looking for?