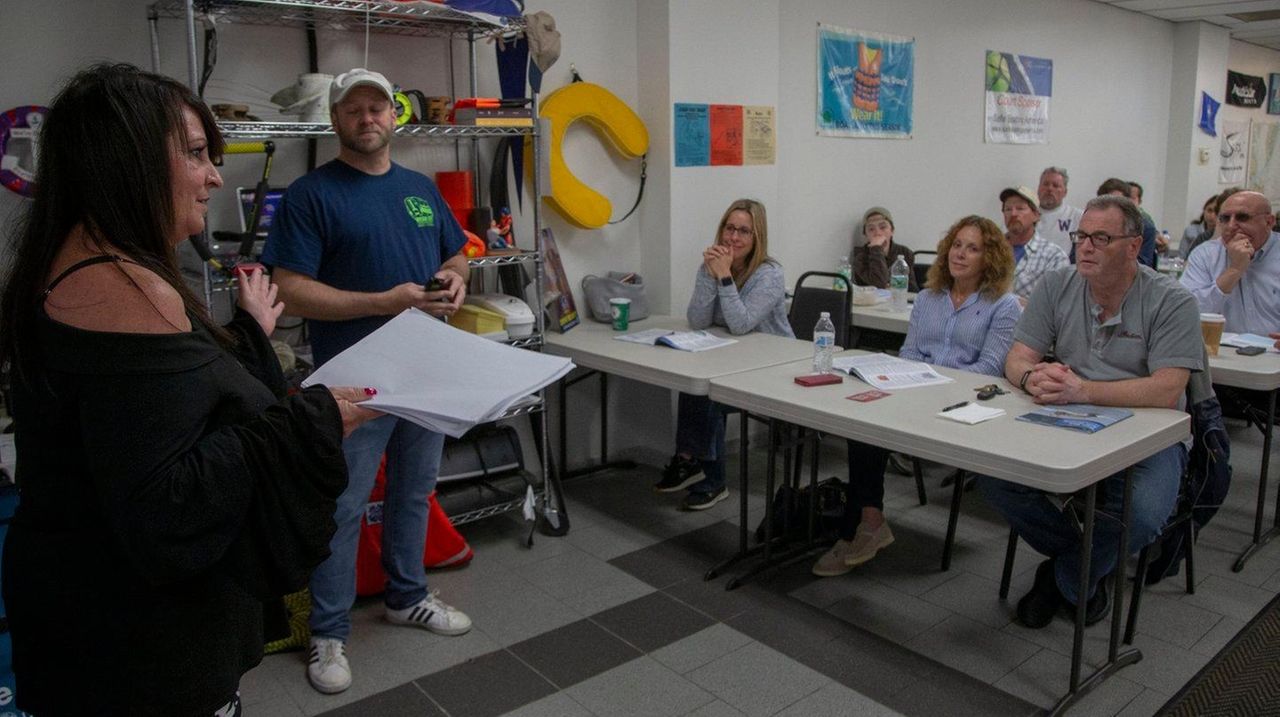 Gina Lieneck of Deer Park, whose 11-year-old daughter Brianna was killed in a boating accident in 2005, spoke at a safety class in Bethpage on Sunday. Lieneck has become an advocate for boating safety and spoke about how important it is to know the rules and regulations on the water. Credit: Howard Schnapp

Gina Lieneck walked slowly, purposefully, to the front of the room, then told the story that changed her life — and now defines it.

Lieneck, her husband, Frank, and their two girls were out on the water, puttering home from Fire Island. It was Aug. 17, 2005. A beautiful, clear night. Brianna, 11, and Danyelle, 13, were singing.

In what seemed like an instant, a heavier boat came up and slammed into the Lienecks. Brianna was sitting on the side that was hit.

“It killed my daughter, and critically injured my husband and myself,” she said.

The 50 students in the Bethpage boating safety class just sat, staring. They could hear the pain in Lieneck’s voice, even after so many years.

Still, Lieneck keeps reliving that day because she doesn’t want any other family to go through what happened to her. She makes her point in boating safety classes, on a dock at a news conference with public officials, really to anyone who will listen.

And she is so determined to make the waters safer that she has become a regular at the Statehouse in Albany, pushing for a law that requires all motorboat operators to take a class in person.

“It gets hard,” Lieneck said of talking about the crash over and over. “It brings so much out of you.”

Honoring the memory of Brianna is a motivation for Lieneck, who is 48 today. But it isn’t the only one. She believes she turned into an activist to do a kind of penance — because mothers seem to find a way to blame themselves when terrible things happen to their children.

“I can’t just say it’s about Brianna,” she said. “So many families have suffered a loss. It’s my job to let their voices be heard.”

Lieneck’s persistence has made an impression on lawmakers in Albany. State Sen. Phil Boyle (R-Bay Shore) and Assemb. Kimberly Jean-Pierre (D-Babylon) are sponsoring the boating bill, which hasn’t come up for a vote in either house.

“Over the years I have seen advocates who turn some personal tragedy into causes for advocacy,” Boyle said. “But none has been more tenacious than Gina.”

The New York Marine Trades Association opposes the boating bill, citing a state law already in place that requires motorboat operators born after May 1, 1996, to take a safety course, either in person or online.

“Are we really fixing the problem?” said Christopher Squeri, executive director of the trade group for marine businesses. “I don’t think this would be effective.”

To help make his case, Squeri points to the boating fatality rates of New Jersey and Connecticut, which mandate safety courses for all motorboat operators. New York’s rate is comparable to its neighbors’ without having such a broad law, he said.

For the Lienecks, the boat crash was only the beginning. The Deer Park couple had to recover from their own injuries as well as dealing with their daughter’s death.

“The next thing I remember was waking up in the hospital,” Lieneck said. “I kept screaming for Brianna.”

One of Lieneck’s most hurtful memories is how she learned about Brianna, who played catcher on her town softball team. A doctor walked into her hospital room, told her he had heard her calling for her daughter and then bluntly told her Brianna had died.

“I went into shock,” she said.

Lieneck spent a month in the hospital; her husband was in and out for 18 months. They both had severe facial and head injuries — and brain damage. Their rehabilitation stretched into years, but it was worse for him. For a time, he had lost his short-term memory. So every day, early on, Frank had to learn that Brianna was no longer with them.

“We both suffered, and still suffer,” she said.

More than a year later, Danyelle started talking about how there ought to be a change in the law. But unlike her mother, she struggles to talk about the crash. It makes her angry.

The operator of the heavier boat faced a criminal charge of boating while intoxicated; prosecutors withdrew the charge after a blood test performed four hours after the collision cleared the driver.

After telling her story to the boating class, Lieneck stressed that boat operators need to know what they’re doing — just like car drivers. They need to know how to navigate, fire off an emergency flare and call in a distress call.

And, she cautioned, drinking while driving can be more dangerous in a boat than in a car.

NY 31st in boating death rate; see national ranksTwenty-two people died in boating accidents in New York last year, the same as the year before and up from 16 deaths in 2015, according to the U.S. Coast Guard, which reported 658 deaths nationwide.