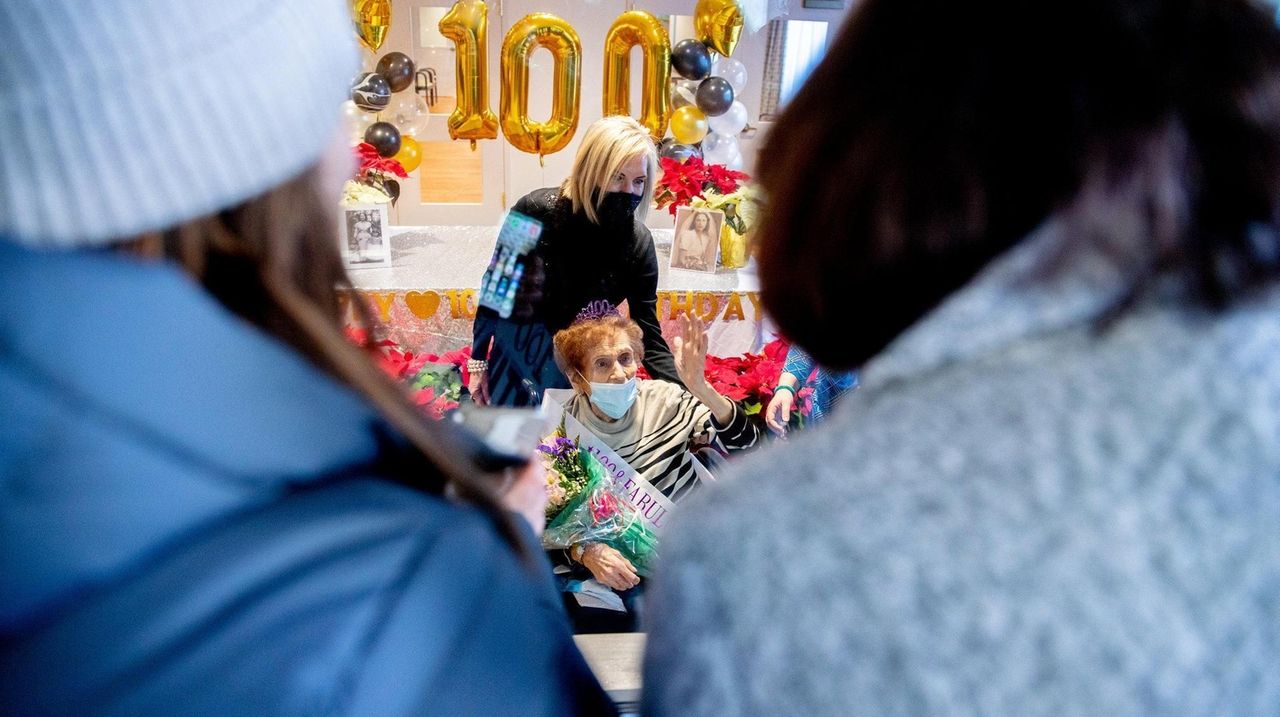 Enid Brezil has much to celebrate. Her mother, Helen Brezil, celebrated her 100th birthday at the Regency Assisted Living in Glen Cove.  Credit: Newsday / Raychel Brightman

Helen Brezil’s daughter and granddaughters had but a few seconds to shout in front of an open window Tuesday before it slid shut at a Glen Cove birthday party, 100 years in the making.

"We love you!" she and the new centenarian's granddaughters said. "You look wonderful!"

The COVID-19 pandemic may have forced the four women to spend the century milestone separated by glass and talking over cellphones, but the family bond was as strong as ever.

"It’s just very hard not being able to see her in person," Enid Brezil said outside the Regency Assisted Living facility before the party started. Brezil said she wanted to tell her mother "just how much I love her and miss her."

Behind glass barriers, the room had been decked out with golden balloons numbered "100," red poinsettias, a white-frosting cake with strawberries on top, and a black-and-white photo of the birthday girl in her wedding gown.

Dianna Esquenet, of Glen Head, described her grandmother as "a pillar of strength, a model of womanhood and always so strong, always so loving. She always provided a space to be whoever you are and she just loves unconditionally."

Esquenet’s sister, Lisa Lucatorto of Port Washington, said their grandmother would always tell them to wear makeup and do their hair, "but she was also a very modern woman, who really helped to give me and my sister the strength to go after our dreams to be strong women."

Brezil grew up in the Bronx with four brothers. She often took care of the siblings because their mother was blind. She worked as a secretary at the Internal Revenue Service for decades and raised two daughters with her husband Jack in Manhattan and Queens. He died in 2010. The couple had been married for 70 years.

"I can’t believe I am 100 years old," Brezil said in a written handout at the birthday party. "As a little girl growing up in the Bronx to hear age 100 was not imaginable."

At the beginning of her personal new century, family is what she values most.

"I am a happy woman. I am appreciative of my life’s blessings and my family," she said in the handout. "I do believe God has rewarded me through my life."

She moved into the assisted living facility in 2015 and was able to celebrate a Bat Mitzvah, something that was unheard of when she was a girl in the 1930s.

"To be able to have a Bat Mitzvah in my 90s was a day I will never forget," she said in the handout.

As she was wheeled into the party Tuesday wearing a purple tiara and sash that said "100 & Fabulous," her granddaughters held birthday signs as people on both sides of the glass clapped and cheered.

"Oh she looks so pretty," one of the onlookers said.

The women looked at each other with joy and tears in their eyes and chatted on cellphones about the party before it was finished.

"It’s bittersweet that she reached her 100th birthday and we can’t celebrate it with her face to face," Enid Brezil said.