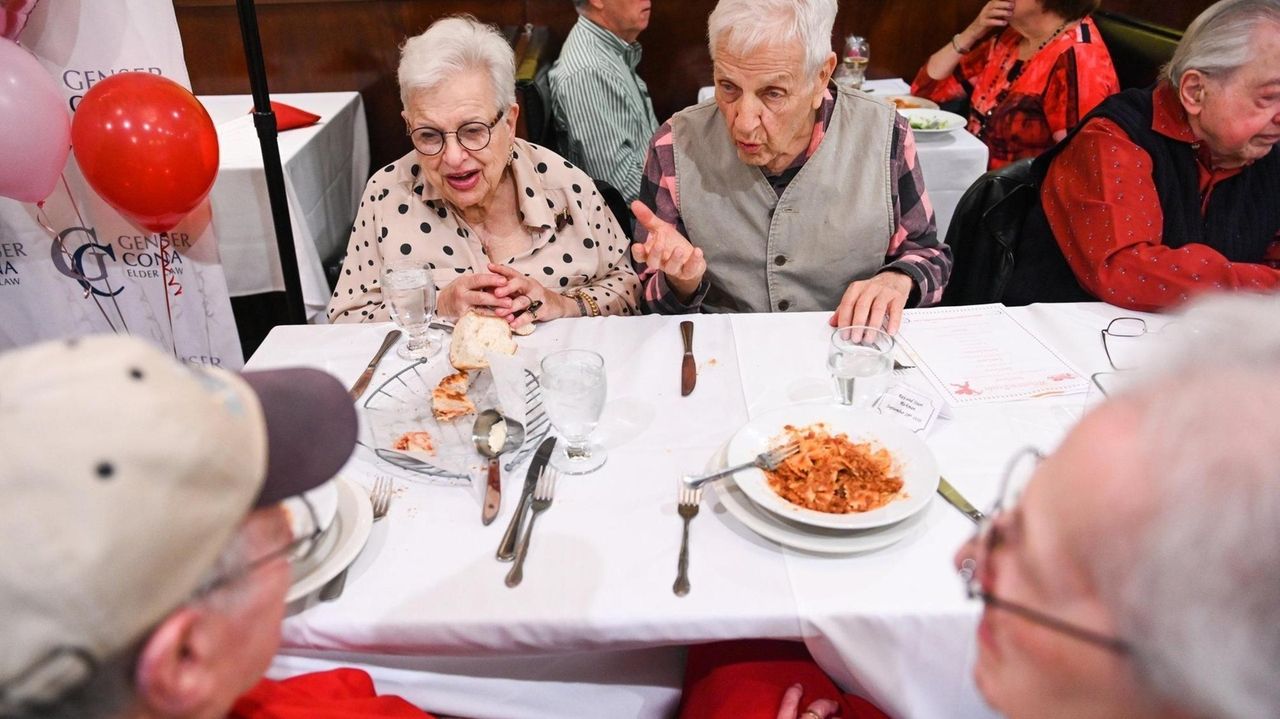 Richard M. Nixon was president when the youngest of some 27 Long Island couples celebrating a special Valentine’s Day feast on Wednesday tied the knot, reaching a milestone that, for each, was achieved through a simple formula that allowed them to stay together.

The couples, who have been married for 50 years or more, were feted with a five-course meal by Genser Cona Elder Law at Piccolo, an Italian restaurant in Bellmore. There, they shared stories of puppy love and love at first sight, reminisced about blind dates and showed off pictures of themselves in their youth.

“It’s really just celebrating love,” said Jennifer B. Cona, managing partner of the law firm, of the first-time event that generated more interest than its organizers anticipated. “With a 50 percent divorce rate, these couples really deserve to be honored.”

‘It’s truly wonderful to see so many couples so happy and healthy together after 50 years of marriage,” she said.

Joseph Licata, 79, and his wife, Margie, 73, of East Meadow, who were married in October 1969, barely made the cut for the event. The couple, who have three children, said they keep their marriage alive with an intense love and a resolve to maintain their partnership over the decades.

“We love each other and when we made a commitment -- and we’ve had fights -- we just stuck to it,” Margie Licata said. "There was never a thought in our minds that we would leave each other. We love our kids and we would never destroy them.”

Marie Filippi, 74, and her husband Jean Filippi, 80, were married in Port-au-Prince, Haiti in May 1966, but the Hicksville couple raised two children and called Long Island home for the past 41 years. They said their determination to overlook small issues and address the big ones together was the key to the success of their marriage.

“We make it work,” she said of their strategy to keep the marriage going. “We make everything work. Because we love each other, I understand him and he understands me, and so we don’t make a big deal out of anything.”

Norman Berkowitz, 91, and his wife, Jean, 86, now of East Meadow, were among the most experienced of the couples, having gotten married in 1953, lived in Levittown for some 64 years and raised three sons.

How do they do it? Like the others, they have learned to face life's problems together no matter what.

“The secret to staying married so long is to not grieve over everything,” Norman Berkowitz said. “Let life go by and roll with the punches. You can’t let anything overwhelm you. You have to love the other person more than you love yourself.”

Starr Lee Rickman, 88, of East Meadow and her husband, Raymond Rickman, 91, were married in September 1950, not long after the two met on a wild New Year’s Eve “hooteanny” in New York City. Both were on the dance floor when the elder Rickman spotted the former Starr Lee Koss.

Seventy years hence, they are still dancing together, and they do it by imagining how bad life would be without each other.

“We’re cowards,” Starr Rickman said, explaining why the couple never broke up. “What’s out there may be worse.”

She added that people should choose mates based on shared values, which will outlast any physical traits.

“Find someone who shares your values because that’s what lasts,” she said. “Looks don’t last. Teeth don’t last. . . And always take the high road, always.”

Quick-thinking by fellow cops, ex-Marine helped save Suffolk officer after Patchogue stabbing, SCPD says
Penn Station expansion moving forward with $1.3B in new budget
Ambulance dedicated to EMT who fell to COVID-19
Smithtown comptroller to retire after steering through pandemic
2:32
'Excluded Workers Fund' could bring $251M to local economy
After Scott Rudin bullying exposé, there are mostly crickets
Didn’t find what you were looking for?