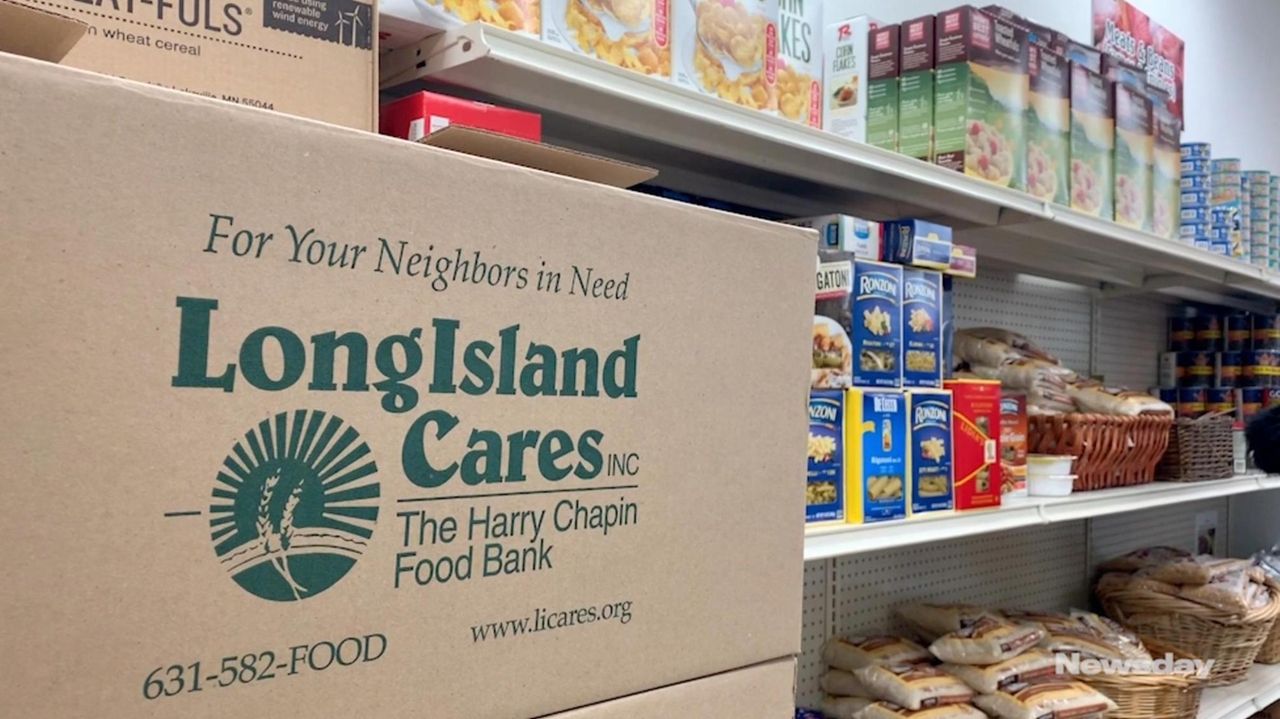 Rep. Kathleen Rice on Tuesday discussed the impact of the government shutdown on Long Islanders who are not getting paid and 50,000 Nassau residents who rely on the Supplemental Nutrition Assistance Program. She spoke at a news conference at Long Island Cares, a food pantry in Freeport. Credit: Howard Schnapp

The federal government shutdown, already putting a strain on thousands of federal employees across Long Island, could claim its next victims in the coming weeks — more than 150,000 food stamp recipients  in Nassau and Suffolk counties, officials said.

The Department of Agriculture has said it can fund the Supplemental Nutrition Assistance Program, known as SNAP, only through the end of February.

Continuation of the shutdown, which began Dec. 22, will mean more than 100,000 Suffolk residents who rely on the federal assistance program to purchase groceries, and another 50,000 residents in Nassau, will not get those benefits in March, Rep. Kathleen Rice said Tuesday.

"If the shutdown persists, these vital programs and the people that rely on them will be thrown into chaos," Rice (D-Garden City) said at a news conference at Long Island Cares, a food pantry in Freeport. "We need to restore normalcy and stability to the lives of our federal workers."

The average New York household getting SNAP benefits receives about $239 monthly, according to federal statistics.

"Too many of our residents in Nassau are food insecure," said County Executive Laura Curran at the news conference. "The elderly and disabled rely on this program to eat and they are being used as pawns in this very dangerous game."

Funding for the USDA's Emergency Food Assistance Program, which supplies local food banks and soup kitchens, is set to expire at the end of February, officials said.

And while local food pantries say they have enough emergency food in storage for a brief period, they conceded that the increased demand from federal workers — and ultimately SNAP benefit recipients — will limit their options.

"This is just getting compounded day after day," said Paule Pachter, chief executive of Long Island Cares. "Every day the government stays shut, another family is being hurt; another community is being hurt."

Long Island Cares, which provides food to about 1,200 clients per month, has helped an additional 80 furloughed or unpaid federal workers since the shutdown began.

"Many are struggling and choosing which bills to pay," Puglia said.

Census data  show 26,000 Nassau and Suffolk county residents work for the federal government, though some have jobs outside Long Island. On the Island, there are 16,000 federal government jobs, according to separate data from the state Department of Labor.

Assemb. Taylor Raynor, a Hempstead Democrat, advised SNAP recipients in her district to make the most out of their existing food stamp benefits until there is another release of federal funds. SNAP recipients should also cut coupons, shop for sales and purchase less expensive store-brand items, Raynor said.

County officials, at the request of Legis. Siela Bynoe (D-Westbury), plan to brief members of the Public Safety Committee at the agency's Monday public meeting about the shutdown's effect on county services.

"It is indispensable for the administration and the Legislature to have a comprehensive understanding of the potential ramifications of the shutdown in the immediate future (for example, over the next two months) and for the long term in the event of a prolonged crisis," Bynoe wrote in a Jan. 16 letter to Curran.