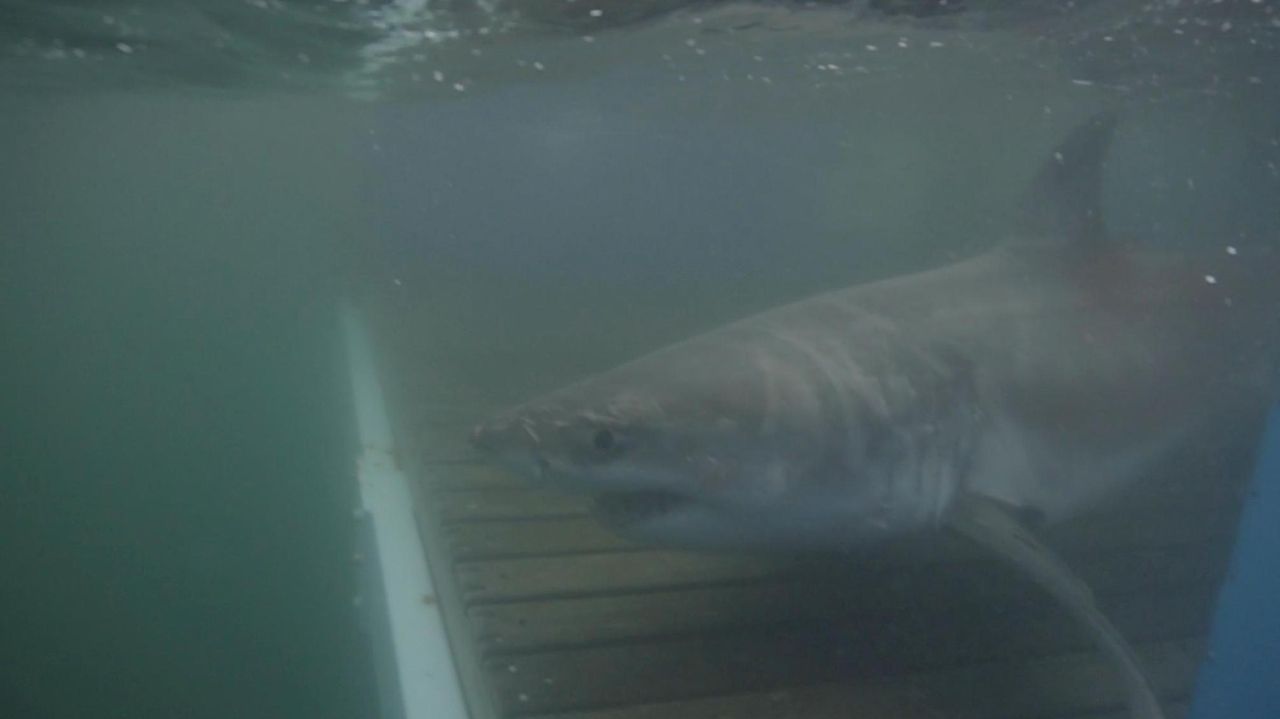 Just in time for the unofficial first weekend of summer, a great white shark is swimming in the waters off Long Island.

The nearly 10-foot-long shark was first detected Monday in the western end of the Long Island Sound, off Greenwich, Connecticut, according to OCEARCH, which electronically tags and tracks sharks. Later Monday the shark pinged in the Atlantic Ocean off the Hamptons, according to OCEARCH's website.

The founding chairman of OCEARCH, Chris Fischer, told The Associated Press that while great whites in the Sound are not unheard of, "we were quite surprised to see this one so far to the west." The shark named Cabot, after explorer John Cabot, was probably after bait fish, he said.

Cabot became an overnight sensation following a bunch of tweets at @GWSharkCabot — "I heard sending a ping from the Long Island Sound had never been done before by a white shark…so naturally I had to visit and send one off. Hello Greenwich how are you today?!" read one tweet Monday.

The great white, it seems, then beat the traffic and headed out east.

On Tuesday, the shark pinged off the Hamptons, in the waters of the New York Bight. The Bight, which stretches from Cape May, New Jersey, to Montauk, has been found to be a nursing area for Atlantic Ocean great whites.

"Well guys, my adventures are taking me elsewhere," Cabot tweeted. "Maybe I’ll stop in again next year. Thank you to the wonderful people of Greenwich for your hospitality!"

According to past tracks, Cabot has been spotted in recent months from the Carolinas to near Nova Scotia. Scientists and marine biologists say great whites can travel in the range of 100 to 150 miles per day.

Of course, anyone who's ever seen "Jaws" may know something about the history, and legends, of great white sharks and the waters surrounding Long Island. The legendary fictional shark-hunter Quint — and the late, real-life, legendary Long Island shark hunter Frank Mundus, for example.

On Tuesday, the senior aquarist at the Long Island Aquarium, Jeff McCarthy, 43, told Newsday swimmers and boaters shouldn’t necessarily fear the presence of a great white like Cabot in any of the waters off Long Island.

While there's been reported great white attacks on swimmers and surfers off Australia and coastal California, the species tends to keep to deeper, offshore waters here in the Atlantic.

"This is more of a transitory place," McCarthy said. "They show up, might surface for food.”

While Fischer, the OCEARCH founder, couldn’t be reached for comment Tuesday, McCarthy said he believes Cabot is simply at an age where he’s exploratory, just like any other teen.

“This is some type of anomaly,” McCarthy said. “This shark was like, ‘What’s in here?’ I think he was just being curious.”