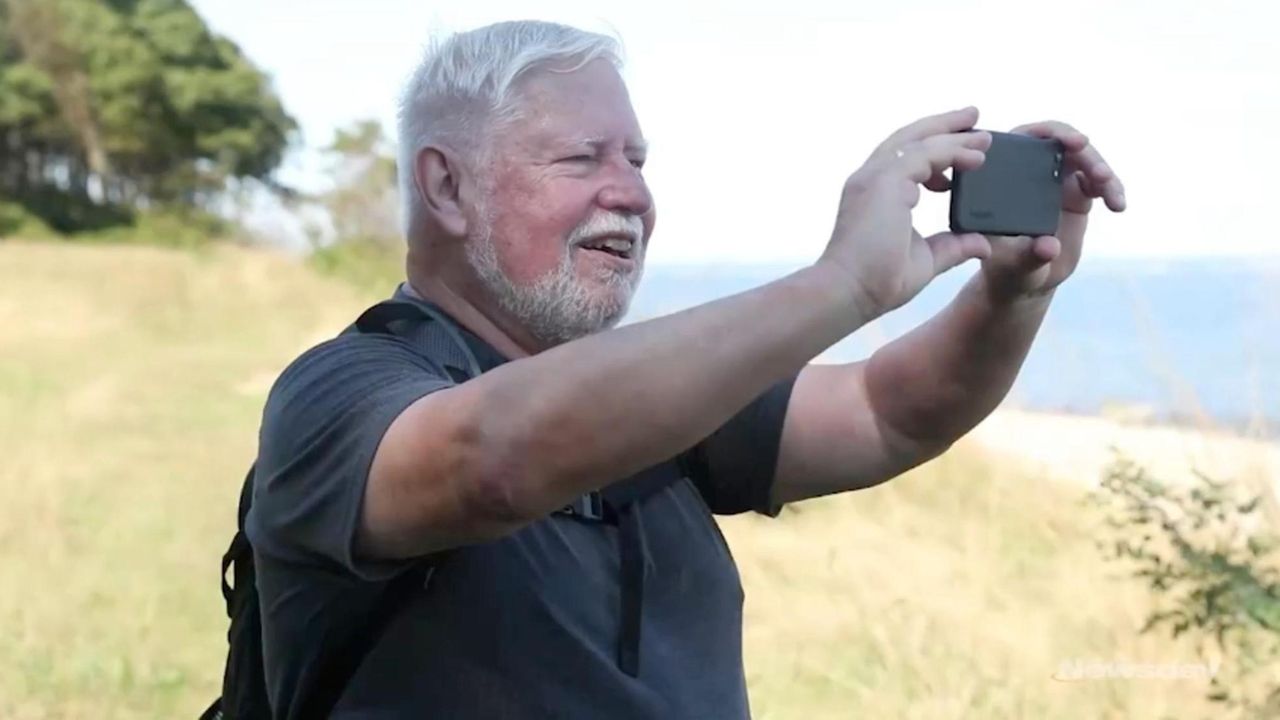 Since their first group hike in October 1978, the Long Island Greenbelt Trail Conference has helped blaze and maintain about 150 miles of trail on Long Island. On Sunday, Sept. 30, 2018, after a hike through Caumsett State Historic Park Preserve, members and hikers talked about the celebration for the conference's 40th anniversary on Oct. 27 at Blydenburgh County Park in Smithtown. It will be a couple of short hikes followed by food and a celebration open to the public. Credit: Randee Daddona

Are you ready to ramble?

On a brilliant Sunday morning in early autumn, a group of 11 women and three men gathered in the parking lot of Caumsett State Park seem prepared to answer that question in the affirmative.

Dressed mostly in shorts and lightweight hiking boots, with backpacks and water bottles at the ready, they’ve arrived to participate in the Caumsett Ramble — a six-mile walk through the woods of this scenic park at the tip of Lloyd Neck in Huntington.

The leader of the hike, Carol Murphy of the Long Island Greenbelt Trail Conference, addresses the group before they stride off from the parking lot, down a grassy trail and into the heart of the park.

“I want everyone to have a good time,” she says. “If you need to stop, let me know.”

On the contrary, these people need to go. Ranging in age from their mid-40s to early 70s, they seem eager to embark at a brisk 3 mph pace, enjoying what Murphy promises will be a “roads less traveled” look at Caumsett.

Which is just what the conference — an all-volunteer organization — has been providing to Long Islanders for 40 years. The group organizes about 150 such guided hikes annually at parks and trails all over Long Island. It is almost entirely member funded, with standard memberships starting at $30 a year.

Since its first group hike in October 1978, the conference has also helped blaze and maintain about 150 miles of trail on Long Island, including the 32-mile Long Island Greenbelt Trail from Sunken Meadow State Park, on the Sound, to Heckscher State Park on the Great South Bay; the 20-mile Nassau-Suffolk trail that runs from Cold Spring Harbor in Suffolk to Massapequa on Nassau’s South Shore; and a 47-mile portion of the 125-mile Paumonok Path, which extends from Rocky Point to Montauk.

On notoriously turf-conscious Long Island, with its various overlapping government entities, the group has managed to do this without ruffling too many feathers. “They work very closely with our managers regarding trail maintenance as well as trail markers,” said George Gorman, Long Island deputy regional director for the New York State Office of Parks, Recreation and Historic Preservation. “They are an excellent partner.”

While the Greenbelt Trail Conference is not the only hiking group on Long Island, it is one of the few that is active in both counties and every township. Moreover, it could be argued that the group's hikes and trails have helped raise Long Islanders’ own awareness about the natural beauty in their own backyards.

“I had no idea there were this many trails or this many parks,” said Ellen Deweerdt, of Huntington, who has been participating in the conference’s hikes for several years and was part of the group at Caumsett that day.

Nature appreciation is not the only reason that brings her out, she added. “Everybody is so wonderful to talk to.”

Indeed, while a walk in the woods can be a solitary act, an opportunity for reflection, it can also be a sort of speed-walking kaffeeklatsch, which is what today’s hike is, with Murphy leading the way.

Other Greenbelt Trail hikes are slower perambulations, with frequent stops to examine the flora and fauna — so called interpretive hikes.

“Some do it for fitness or for the social aspect,” said Tom Casey, a vice president of the conference. Casey, who participated in the Caumsett hike, huffed and puffed at the aggressive pace. “I like to do interpretive hikes,” he said, smiling wryly. “That way I don’t have to walk as fast.”

FIGHT FOR THE GREENBELT

Casey has been with the Long Island Greenbelt Trail Conference nearly since its inception — a birth sparked by outrage. In 1975, a developer proposed building an industrial park at the headwaters of the Connetquot River. Nancy Manfredonia, a Central Islip resident who had been active in the nascent environmental movement, mobilized like-minded friends to stop it. “We were pretty upset,” she recalled. “A number of people got together to figure out what we could do about it. Eventually, that effort bore fruit. We were able to convince the county that the land should be purchased and made into a park.”

During their battle to prevent the development, Manfredonia and her colleagues pored over maps of Western and Central Suffolk County. They noticed that a string of parks running north to south from Sunken Meadow to Heckscher formed almost a contiguous band of green. “We said, ‘hey we have a greenbelt running through the Island!’ ” she recalled.

The group then approached the county about blazing a trail that would connect all of that green space, so that hikers could walk from the Sound to the sea. “They basically patted us on the head and said, ‘yeah fine go ahead,’ ” recalled Manfredonia. “I don’t think they ever thought we would really do it.’”

Not every legislator felt that way. “Nancy had a vision of protecting open space and making it accessible that I thought was brilliant and timely,” said Steve Englebright, a New York State assemblyman  who was then a Suffolk County legislator from Setauket.

Manfredonia and her group plunged into the effort, restoring old, long-unused trails to connect the existing ones in the parks. It took a couple of years of work and more bureaucratic wrangling, but on Oct. 10, 1978, the Long Island Greenbelt Trail was inaugurated with a two-day hike by about 40 participants, including Englebright, an early supporter of the group. Some of the hikers camped the night in Blydenburgh Park, about halfway through, during that first hike.

“Somebody brought a bottle of water from the Sound and when we reached Heckscher, we dumped it into the Great South Bay,” recalled Manfredonia, who became the first president of the group, dubbed the Long Island Greenbelt Trail Conference after the New York-New Jersey Trail Conference — an established consortium of area hiking groups. Manfredonia held that position until 2009, and she remains on the group’s board.

At first, she said, people were incredulous at the idea of trails in the middle of America’s first suburb. “Whenever anyone thought about hiking, it was ‘Oh you have to be upstate, you have to be in the mountains.’ We said, ‘No, you don’t. You can hike right here on Long Island.”

AN ESCAPE FROM REALITY

Murphy, a Huntington resident who has been a member of the Greenbelt Trail organization for about 25 years, leads the Caumsett group through dense stands of sassafras, hickory and scarlet oak trees, and on a byzantine   series of trails, some wide and well groomed, and others that are almost imperceptible traces through the brush.

Although she now navigates these woods like a frontierswoman, Murphy said her awareness of the outdoors before her involvement with the group didn’t extend much farther than the Long Island Expressway. “I didn’t even know trails existed on Long Island before I joined,” she says.

The bicyclists and joggers who passed the group earlier have vanished. The hike is now clearly, as advertised in the description on the Greenbelt website, off the beaten path.

“I’ve been up to Caumsett before,” says Jeanne Fitzpatrick of South Huntington. “But definitely not back here!”

Like most of the group, Fitzpatrick says she is here for the exercise and the surroundings. “I go to the gym,” she says. “But this is totally different. Everyone’s personable. It’s more relaxing.”

Then suddenly, the hike comes to a screeching halt. Someone has spotted a large bird perched on a branch just off the trail. Casey, the amateur naturalist, is ushered forward to identify the regal-looking creature who gazes down imperiously at the hikers. “Cooper’s hawk,” he declares, after looking at the whitish belly and relatively small tail (compared to the larger red-tailed hawk).

Seeing a hawk up close is exciting, but not quite as startling as what the veteran hiker calls his most memorable wildlife encounter on a Greenbelt hike. “I walked into a flock of wild turkeys once on the Paumanok Path,” Casey said. “Scared the heck out of them . . .  and me.”

Indeed, the hikes can be full of surprises — some of them breathtaking. A right turn off one narrow trail, and there is Long Island Sound, shimmering and sparkling before the Caumsett ramblers. Nearly two hours into the hike, the group has made it to the far northern end of the park.

"Beautiful,” is how Brigitt Simpson, of Miller Place, describes the water view. Simpson grew up hiking the mountains and trails of her native Austria. But after moving here in 2001, she behaved like many other Long Islanders, at least when it came to the trails and woods. “I just drove right by them,” she says with a laugh. “I would have never seen these places on my own.” Some of her favorites include the Quogue Wildlife Refuge and the Bayard Cutting Arboretum.

The typical Greenbelt group hike attracts 15 to 25 participants (although Casey, who personally leads about 32 hikes a year, has had as many as 60 participants in one of his interpretive hikes of the Long Island Greenbelt Trail).

Murphy now guides her charges back toward the parking lot. Her rambling route is a large circle through the park, but the pace is maintained, and the group continues to chitchat all the way to the end.

“You meet all kinds of people with all kinds of backgrounds,” says Jennifer Hovestadt-Molloy, of East Yaphank.

Hovestadt-Molloy, a speech pathologist, has been participating in Greenbelt Trail hikes for eight years. “I’ve learned a lot about the Island,” she says. “The trees, the ecosystem, the history. It’s a beautiful escape from reality.”

But the reality is that this is Long Island. As the group enters the final stretch of the hike, past park buildings and onto the pavement of the main road, there is certainly a sense of completion beyond six fast-paced miles, a sense that those on this hike have been afforded a privileged view of a part of the Island that many never get to see.

Although anyone can, thanks to the Long Island Greenbelt Trail Conference.

The Long Island Greenbelt Trail Conference's 40th anniversary hikes will take place Nov. 3. Two guided hikes will be followed by a celebration with refreshments at the group’s headquarters at the Blydenburgh-Weld House in Blydenburgh County Park in Smithtown.

The first hike, 5.75 miles around Stump Pond, starts at 11 a.m.; call 631-567-9484 for more information. The second hike, about 2 to 2.5 miles, also goes along the pond and begins at 1 p.m.; call 631-682-0035 for more information. Heavy rain will cancel the hikes, but the celebration will go on at 2 p.m. Both hikes, which are moderately paced, start at the Greenbelt headquarters. Participation in the guided hikes and the anniversary event are free.

For detailed directions to the Greenbelt office, along with general and membership information, visit ligreenbelt.org.

Early signs point to promising year for school funding
Three times Gen. Powell made news on LI
Report: Law firm in opioids case should be sanctioned
Old Coast Guard station's removal from Gilgo park to improve beach safety
Doctors: Number of people who have died after getting vaccine 'minuscule'
So far so good for nascent Babylon Rental Review Board
Didn’t find what you were looking for?