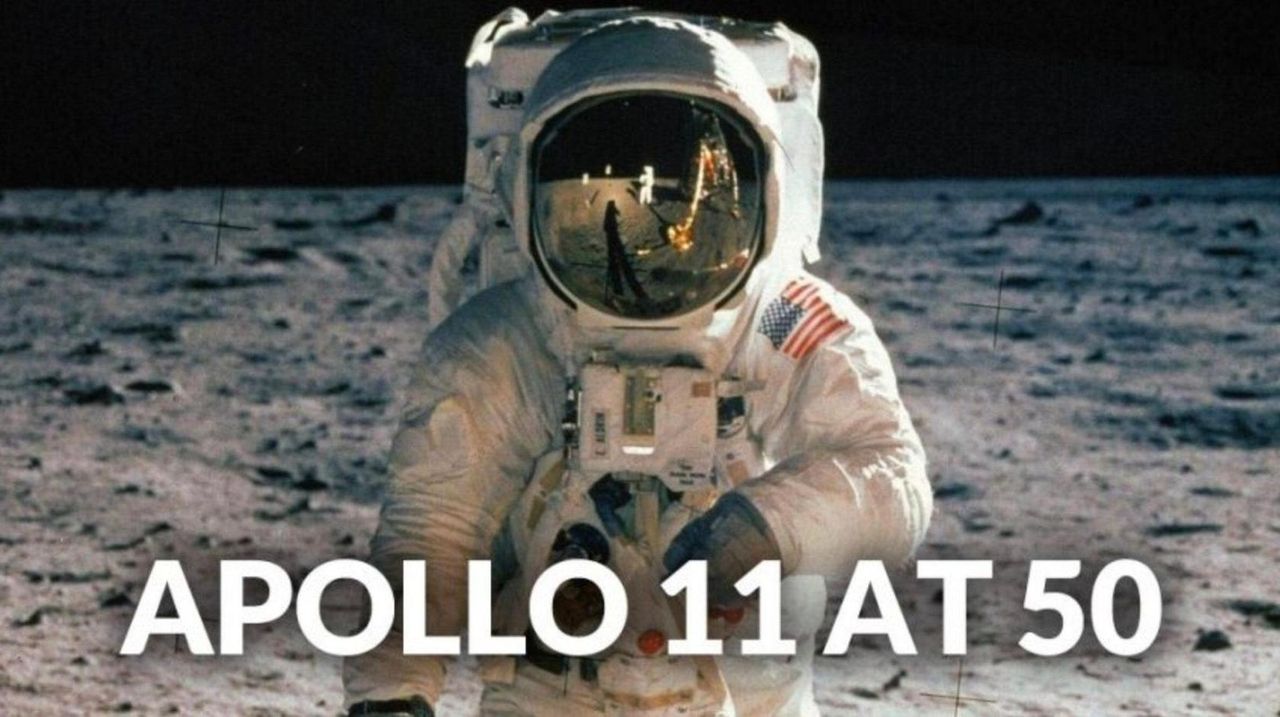 To mark the 50th anniversary the Apollo 11 moon landing on July 20, 1969, some of those involved retrace their steps and the giant leap that made history. Credit: Archival Footage: National Archives and Records Administration; Newsday staff

That was how astronaut Neil Armstrong described Lunar Module 5 -- the vessel that carried him to the moon's surface -- on a visit to thank its builders at Grumman Corp. two months after the epic voyage.

In the 47 years since the final Apollo mission, no human has touched the moon's surface. What remains there are the bottom stages of six Lunar Modules, each with a landing strut nameplate serving as a reminder of Long Island's role: "Made in Bethpage."

When Grumman itself was launched in 1930, however, there was scant thought of moon shots. Instead Huntington native Leroy Grumman and his co-founders were scrambling for funds to open an aircraft repair shop in a decrepit garage in Baldwin.

The shop had "broken windows and about three feet of leaves on the floor," recalled Leroy Grumman's son, David Grumman, 84, of Evanston, Illinois. .

After a motorist crashed into a plane jutting out the shop's door, the startup's founders feared a calamitous lawsuit. The irate driver was mollified when they did body work on his car, David Grumman said.

Eventually Leroy Grumman, who had left a job as an executive of Manhattan-based Loening Aeronautical Engineering Corp. when that company was acquired, began landing contracts to build planes for the Navy. His signature contributions included innovative ways to retract landing gear and fold wings on planes based on aircraft carriers.

The Soviet Union emerged as America's prime rival after World War II, and that country's launch of Sputnik, the first manmade satellite, into orbit in October 1957 stunned the world. The space race was on.

By 1960, Grumman, which had since moved to Bethpage, Farmingdale-based Republic Aviation Corp. and other aerospace contractors were submitting preliminary studies to a nascent NASA for a manned lunar landing.

President John F. Kennedy  turned to NASA for a "space spectacular" to counter the Soviets, Thomas J. Kelly, a Grumman executive, wrote in his book "Moon Lander: How we developed the Apollo lunar module."

In a speech before Congress on May 25, 1961, Kennedy called for a manned lunar landing before the end of the decade.

Kelly, who became known as "father of the lunar module," understood the potential implications for Grumman: "The roulette wheel had stopped on our number," he wrote.

Still, the path into space was far from smooth.

In 1959, Grumman had won an 11-company competition to build the capsule to carry the Mercury astronauts aloft, but was blocked when the Navy protested that the project could interfere with the scheduled delivery of its aircraft.

In 1961, Grumman's top brass vetoed plans to bid as the prime contractor on Apollo's three-man command module and service module, fearing it could bankrupt the company. Instead, Grumman joined General Electric's failed bid as a subcontractor.

Top NASA officials chose the earth-orbit rendezvous. But a pivotal November 1961 "voice in the wilderness" letter from NASA researcher Robert Houbolt to an agency administrator pressed the case for a lunar-orbit rendezvous on which Grumman's lunar module design ultimately was  based.

In July 1962, Grumman was among 11 companies invited by NASA to submit lunar module proposals.

"Unstated...was the realization that this was our last chance at Apollo," Kelly wrote of a meeting with NASA officials.

In November 1962, NASA declared it would use the lunar orbit rendezvous technique and later that month chose Grumman to build the lunar module. The following March, a formal contract was signed for $387.9 million.

Building a first-of-its-kind spacecraft was daunting, even for a company at the forefront of aviation. NASA's design tolerances called for one chance in 100 of an aborted mission and one chance in 1,000 of a fatality.

Batteries were substituted for complex fuel cells. Windows were downsized. Aluminized sheets were substituted for exterior walls to provide insulation and protection from micro-meteors. Seats were simply jettisoned, given that the crew would operate in space with zero gravity or on the moon with one-sixth earth's gravity.

"They looked at every single component," recalled Dick Dunne, who was Grumman's director of public affairs-space. "If you could take an ounce off, they took an ounce off."

Even with an eye on the scale, the lunar module's weight climbed from 22,000 pounds in an early design to more than 30,000 with fuel loaded.

Grumman's fortunes rose in tandem with the Apollo program. Revenues tripled from $326.3 million in 1960 to $1.1 billion in 1966, the year Leroy Grumman, suffering from diabetes, retired as chairman.

Construction was in a cavernous, pressurized clean room that let Grumman workers assemble three lunar modules at once. Sixty-hour work weeks were common.

Ernest Finamore of Massapequa Park worked in quality control, checking out every installation. "We'd have to wear our white coat, white hat and gloves," Finamore, 93, recalled. If a technician was doing fine work that required gloves to come off, the parts were washed down with a solvent "because we didn't want to send germs to the moon."

Peter Kelly of Merrick recalls his father, Thomas Kelly, falling asleep on the couch, reading documents. "My father's biggest fear was that something would happen and the astronauts wouldn't return. That kept him up at night."

As a child growing up in Huntington, Peter Kelly said he saw nothing unusual in the fact that "my father built spaceships."

But these days he calls it historic.

"There was a lot of brain power... a lot of guesswork and a huge leap of faith."

Apollo 11 at 50: The Mission. The Module. The LIers.As the 50th anniversary of the first moon landing nears, we look at the moments that captivated the world - and the key role thousands of Long Islanders played in the mission.