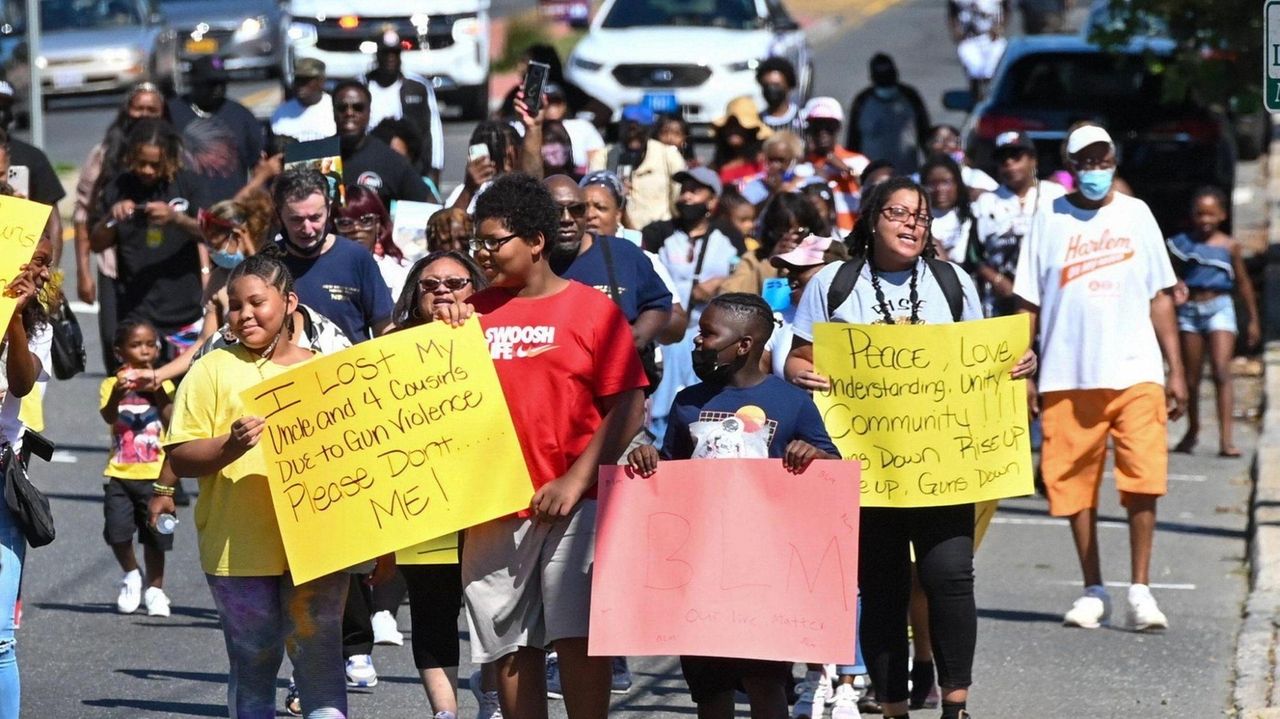 Residents of Wyandanch gathered to march against gun violence in the community on Saturday. Credit: James Carbone

Indiana Bumpers carried a cardboard collage of more than a dozen photos of her late son as she and about 75 others marched against gun-related crime Saturday in Wyandanch.

"The gun violence is out of control," said Bumpers, whose son Malik Stoddart, 18, was shot to death on Sept. 4, 2016, in Wyandanch, an hour before another man was gunned down in an unrelated shooting in Central Islip. "Something needs to be done. Our youth are dying every day in this community, and nobody’s doing anything about it."

Marchers shouted "drop the guns, save our sons" as they walked a half mile from Straight Path to Wyandanch Park for a rally.

The march occurred amid a spike in gun violence. There were nearly 24% more shootings this year in Suffolk County through Aug. 28 than there were during the same time period in 2020, Suffolk police data shows: 52 shootings, compared with 42 last year. Twelve people had died of shootings in Suffolk as of Aug. 28, compared with eight in the same period last year.

Gun violence also is up in areas that Nassau County police patrol, and in New York City, as well as cities nationwide.

Behind the grim numbers are the faces of victims like Stoddart, who was preparing to start at Monroe College in New Rochelle when he died at a friend’s small party, Bumpers said.

"There’s us on vacation," Bumpers said as she pointed to a photo of her and her son in the montage. "This is him in front of Monroe College. This is him at Wyandanch football. This is him on the track team."

Stoddart was planning to pursue a career at the Central Intelligence Agency or Federal Bureau of Investigation, Bumpers said, and the Wyandanch High School track star had aimed to compete in the Olympics.

"He had so many dreams" said Bumpers, who donned a "Justice for Malik" T-shirt with photos of her son on the front and back. "Everything was destroyed."

Stoddart’s 5-year-old son, Aaron, was only 3 weeks old when his father was murdered and "he’s asking me who killed his father," she said. "I don’t know what answer to give him."

Bumpers said eight people witnessed the shooting, and she said she’s frustrated that no one has come forward.

"Everyone’s going on with their lives like nothing happened," she said.

Renita Certain, owner of Spin The Yard, a Wyandanch boutique that also functions as a nonprofit community resource center, said she helped organize the events after Toniann Ziegler, 59, of Wyandanch, came into her store a few weeks ago following the murder of Ziegler's son and spoke of the need for more awareness of gun violence.

"In order to help a community, you have to bring it together," said Certain, whose best friend was shot dead in Jamaica, Queens, two years ago.

Ziegler, whose son Derrick Dixon, 32, of Wyandanch, was shot to death on July 21, said she wanted to help "save someone’s family from going through what we’re going through."

Later, a tearful Ziegler hugged Zanquasia Brooks, 27, of Wyandanch, who had just spoken at the rally about how her father Eric Brooks, 35, was murdered in 2012.

Lakiecha Sexton, 48, of Wyandanch, carried photos of one of the most recent Suffolk shooting victims, Wyandanch High School football star Alonte Shipp, who was shot to death on Aug. 23 at age 20.

Shipp would have been 21 on Sunday, she said.

"We’re still going to have a party for him," she said. "We’re going to make his favorite food, as if he were here, because he is still here. He’s still shining."