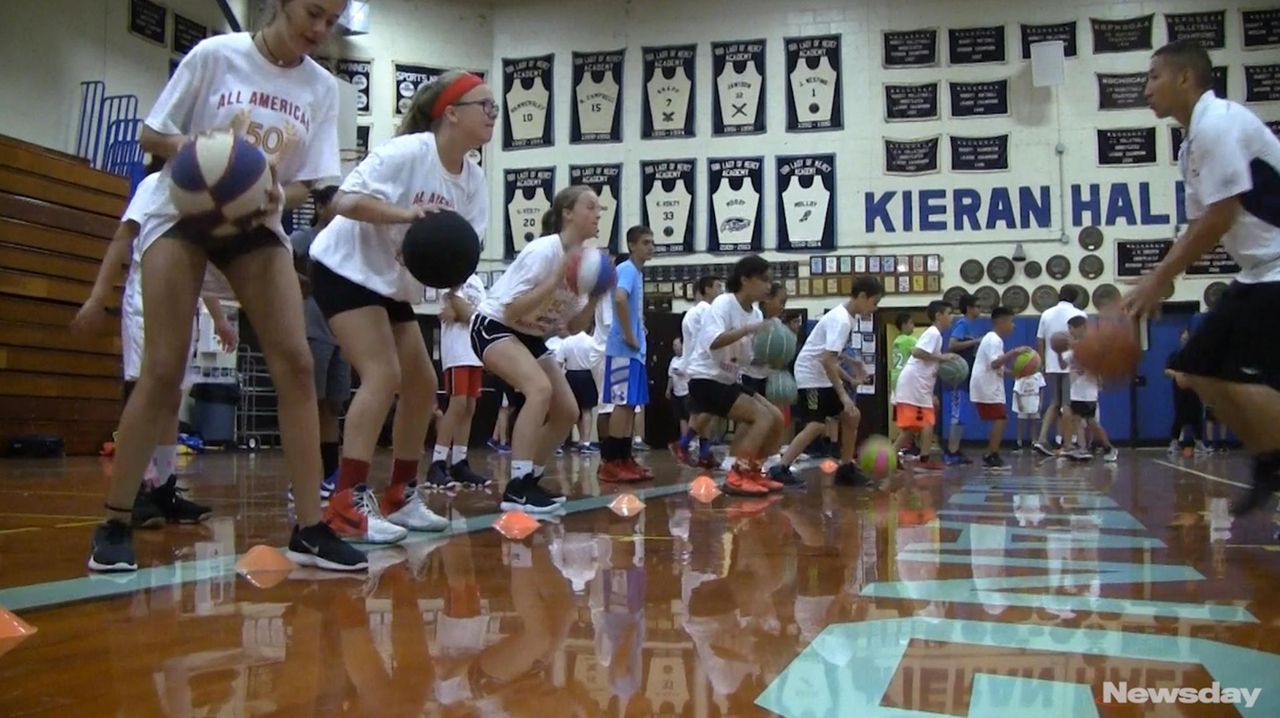 Gus Alfieri’s love affair with basketball began Christmas morning in 1947. Among the multitude of gifts tucked under the tree, only one riveted his attention: a tan and brown leather basketball with white lacing.

Each day, Alfieri, then a third-grader, would tote the ball to St. Cecilia School in Greenpoint, Brooklyn, to shoot hoops. When he wasn’t on the court, he would lie on his bed and fantasize that he was dunking that ball into an imaginary net.

Alfieri, now 81, of Smithtown, said the Christian Brothers in his grammar and preparatory schools reinforced his love for the game. “We practiced five days a week and one and a half hours a day,” recalled the still slender, 6-foot-2 grandfather of nine. “These brothers were tough and passionate about basketball.”

Over the next seven decades, the basketball enthusiast would become a collegiate basketball star, Hall of Fame championship high school basketball coach, author of two books about the sport — and the founder of a successful Long Island basketball camp that marked its 50th anniversary July 25.

“Everything good in my life stems from basketball,” he said. “God works in strange ways, and put me in good places.”

One “good” place he said God brought him to was Rockaway Beach, Queens. He and a bunch of friends went to the beach. That’s where he met his wife of 57 years, Janet, whom he calls “my sounding board.”

Born in Brooklyn, Alfieri was one of five boys. His father, a foreman house painter, and his mother, a homemaker, emigrated from a small town outside Naples, Italy. When the young Alfieri was due to graduate from grammar school, the athletic director of St. Francis Preparatory School in Fresh Meadows, Queens, saw him play in a Christmas basketball tournament and was impressed. The next day he got a call from the school offering him a scholarship and putting him on the junior varsity team.

“Once I got into that prep school, I was off and running,” said Alfieri, whose life from that point started “falling into place.”

At St. Francis Prep, he was a star forward and the only sophomore with the physical strength and talent, he said, to play at the varsity level. As a senior, he made several 1954 all-star teams, including the prestigious All-New York City team.

Early on, he set his sights on attending St. John’s University in Jamaica, Queens, known at the time as the “Notre Dame” of collegiate basketball, he said. The basketball team was headed by the legendary Joe Lapchick, a coach of four national championship teams at the university, a member of the original Celtics team and a Hall of Fame player. Alfieri would later pen a book, “Lapchick” (Lyons, 2006).

While he excelled academically as an English and history major at St. John’s, he flourished as a star point guard of its basketball team. He played 40 games at Madison Square Garden and scored 1,200 points during his college career.

“Playing at Madison Square Garden in ’59 at the NIT [National Invitation Tournament] and being a part of a national championship team were major accomplishments,” he said.

Fresh out of St. John’s, his plans to make an NBA team derailed. After playing just three games in the defunct Eastern Basketball League, considered a minor league at the time, the No. 11 lefty basketball player was cut.

Disappointed but not devastated, he scored a scholarship to study education in the master’s degree program at St. John’s University. By the fall of 1959, Hicksville High School offered him a job teaching social studies. Within two years, he and Janet, were married and expecting the first of four children.

Alfieri said he enjoyed teaching and relished the job’s financial security, yet he felt disconnected from basketball. The school district prohibited classroom teachers from coaching, so when he resigned to take another job, the Hicksville principal offered him a job as the assistant basketball coach job for the varsity and then junior varsity teams.

It was in the early 1960s, Alfieri said, when summer basketball camps were becoming popular. Ready for a challenge, he decided to capitalize on the trend, opening the All-American Basketball Camp for children in 1968. The camp offered one-on-one instruction from seasoned coaches and inspirational lectures from such legends as professional basketball players Julius Erving and Rick Barry, and St. John’s University’s basketball coach Lou Carnesecca.

That same year, he learned that St. Anthony’s High School, originally in Kings Park and now in South Huntington, was searching for a coach for its struggling basketball team. “I came in full of vinegar and pepper because I wanted to change things around,” said Alfieri, who continued to work in Hicksville while coaching St. Anthony’s.

And change he did. “I decided we would play a more defensive game by holding the ball longer and getting good shots,” he explained. “Slowly but surely, we developed a strong defense and that became our meal ticket.”

By the close of his tenure in 1986, he had produced a 328-106 record, leading the team to two state championships and four Nassau-Suffolk Catholic High School Athletic Association titles. St. Anthony’s was now first in the state and fifth-best overall in the nation.

While keeping a hand in coaching at his summer camp, he earned a second master’s in history and a doctorate in American cultural history from Stony Brook University, where he taught a graduate course, Sports in Society, for nearly 15 years.

“Although Gus is no longer our coach here, he left that basketball legacy with us,” said Brother Gary Cregan, the principal. “He had that beautiful ability to hone in and see where potentiality is in a young man. It’s a rare talent. Our new coach reminds the team they are part of a long legacy, that they are part of something very august . . . that is how the spirit of Gus continues.”

A protégé of Alfieri’s on St. Anthony’s team, Kenny Atkinson, head coach of the Brooklyn Nets, fondly recalls his onetime coach’s influence. “Gus had the image of a tough guy, but he was compassionate and he cared about us,” said Atkinson, a guest at the camp last week. “He took the time to form a relationship with us. I try to impart that same compassion to the Nets.”

Today, Alfieri leads a sports book club at the Smithtown Public Library that he founded in 2003 and takes great pride in his self-published memoir, “The Heart of a Champion.” He continues to coach at his camp with his son, Ronald, 57, who lives in Chino Hills, California, but flies out to Long Island every summer to help his father. On a recent day at the camp, based at Our Lady of Mercy Academy in Syosset, dozens of children dribbled basketballs and shot hoops.

One camper, Giannah Rivera, 14, of West Babylon, a rising 10th-grader at St. Anthony’s High School, said she likes the camp because she can “have fun but still learn the fundamentals of the game.”

Gregory Paul, 16, a rising junior at Mepham High School in Bellmore, has been attending the camp for six years. “I know my skills and knowledge of the game have improved,” Paul said. Off the court, Paul said, Alfieri is a role model who has taught him “basic life lessons” about not falling in with the wrong crowd and the dangers of abusing drugs and alcohol.

Alfieri, who works out nearly two hours every day, said he has no plans to retire and wants to “try to live to 100.” “I’m having a great time and I love what I’m doing,” he said.

Perhaps his mentor, the St. John’s basketball coach Lou Carnesecca, summed up Alfieri’s achievements best: “He puts everything he has toward developing a player. He has great dedication, determination and intelligence. And all that fits together.”