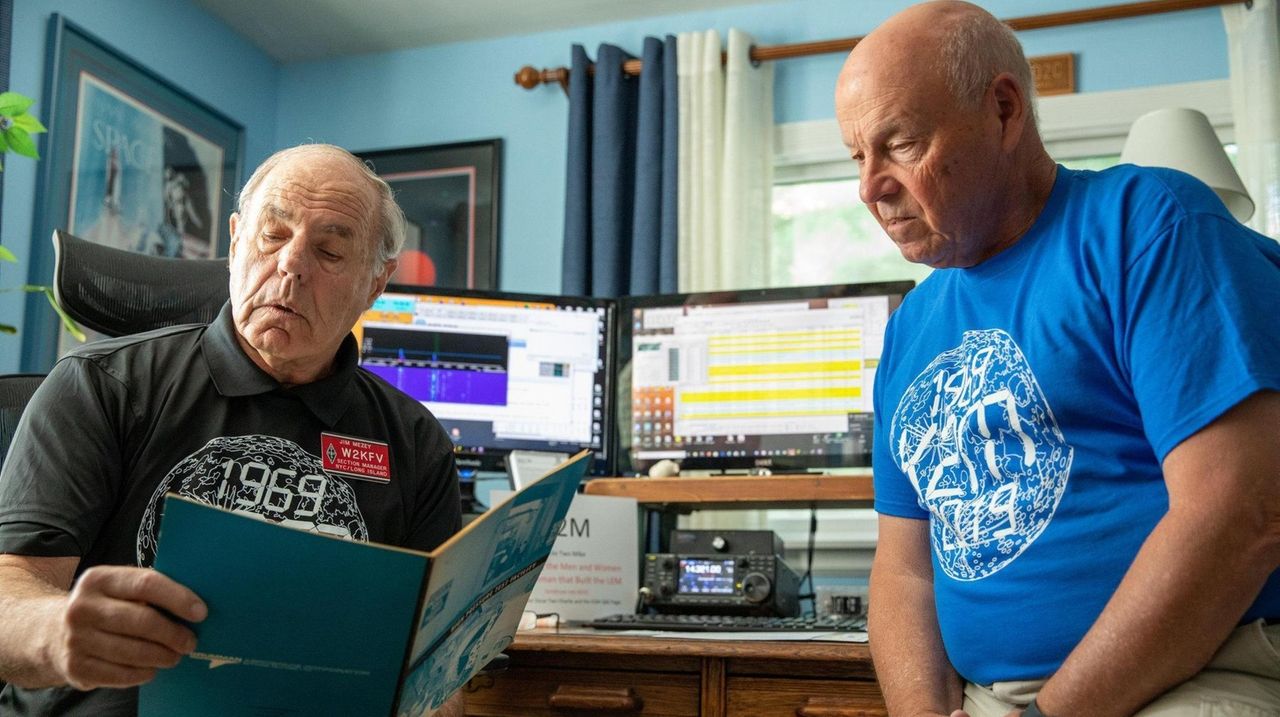 Deep in a corner of his Islip Terrace home, Lou Maggio has a desk stacked with computer monitors and radio gear — transmitter, receiver and amplifier.

All the buttons and switches look a little like the controls inside a spaceship, which seemed appropriate since Maggio and his amateur radio club were bouncing their signal around the world to commemorate the 50th anniversary of America putting a man on the moon.

Ham radio operators nationwide are taking to the airwaves over the next few days to mark the Apollo 11 lunar landing on July 20, 1969. And the Great South Bay Amateur Radio Club wanted to pay special tribute to the mission because Long Island-based Grumman Corp. is where the lunar module was designed, built and tested.

"I said, 'Let's do something to honor Apollo 11,' but I didn't want to do anything without including some Grumman workers," said Maggio, 70, whose call sign is NO2C. "Then somebody told me I was standing right next to a Grumman worker — Leon."

Leon Gurinsky, 75, of Bay Shore, was a rocket engine technician who helped install the module's engines. On Tuesday, he was on the radio with Maggio and Jim Mezey, 74, of Carle Place, who tested the module's systems in his job as an instrumentation engineer at Grumman.

In less than an hour, Maggio, Gurinsky and Mezey — whose call signs are KD2ONC and W2KFV, respectively — had made more than 50 contacts — from as close as Massapequa Park to as far away as England.

The voices on the other end were muffled by static and white noise, sounding a lot like the conversations between mission control and the Apollo astronauts.

The Long Islanders talked to Jim from Indiana, who told them about how he watched the moon landing on a battery-operated TV. Mike from Atlanta connected with them from his car.

Fueled by coffee and doughnuts , the men told person after person that they were honoring the Long Islanders who worked on the lunar module.

The club, which has about 150 members, has transmissions planned through July 24, the date when the Apollo capsule splashed down.

On Saturday, the day of the anniversary, club members will be at Gilbert Park in the Village of Brightwaters from 9 a.m. to 11:30 p.m.

At one point Tuesday, Gurinsky connected with a man named Bob on the Isle of Man, in the Irish Sea between Ireland and Britain.

"I worked on the LM," Gurinsky told Bob. "I installed the engines."