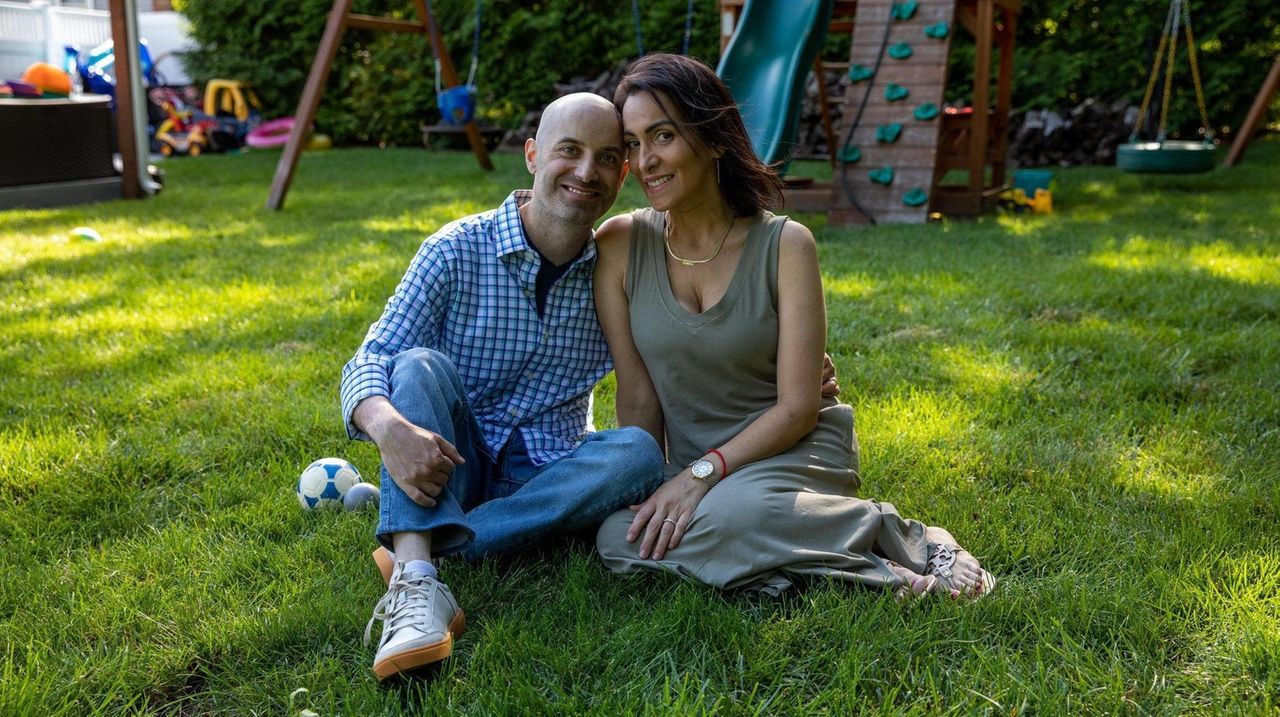 This Father's Day the Frey family of Miller Place is glad they can spend it together after Christopher Frey, husband and father of two, received a heart transplant earlier this year. Credit: Morgan Campbell; Claudia Paul / Mount Sinai Health System

When he woke in the ambulance en route to Mount Sinai Hospital in Manhattan, Christopher Frey first envisioned, of all things, he was on line at McDonald's.

The stretcher? That confused him.

The part about how he'd "coded," gone into cardiac arrest, had basically been dead on the table almost 45 minutes, had been in a coma for a week, was in severe heart failure and now headed from one hospital to another? They explained all that to him later.

Months after the fact, Frey, 38, of Miller Place, can tell the story and crack jokes. Which is amusing, actually, until he recounts the 100-plus days he spent in a series of lonely hospital rooms; tells of the nights spent watching TV, too afraid to sleep, thinking if he did he would certainly die. Until he speaks of learning he needed a new heart, about how scared he was that he wouldn't survive the 18½-hour operation he'd need to get it. Until he tells of his darkest hours, when he thought he might never see his wife, Christine, or sons Patrick, 3, and Charlie, 2, ever again.

All of which, Frey said, makes Father's Day 2021 one most cherished.

"Am I looking forward to Father's Day?" he said. "Oh, my God, yeah . . . I'm just so grateful every morning I wake up, being able to play with my boys. Knowing there was this idea, how afraid I was over the idea, of never seeing them again."

Frey, born with a rare congenital heart defect, will celebrate Sunday with his wife and sons, and with his own mom and dad, Rose and Kenneth, at the home in East Northport where he grew up with older sister Melissa. That is, he said, because of the work of heart transplant surgeon Dr. Anelechi Anyanwu and the specialists at Mount Sinai.

It's also because of the pre- and post-surgical steadfastness and expertise of Mount Sinai heart failure cardiologist Dr. Anu Lala, who one day told him simply: "You can cry."

It is especially because of the heart donor, someone that, due to HIPAA — the Health Insurance Portability and Accountability Act of 1996 — he knows nothing about. Nothing other than that they died. Which, he said, makes him sad. And eternally grateful.

Dr. Ali Zaidi, Director of Congenital Heart Disease for the Mount Sinai Health System, said 1% of all newborns have a congenital heart defect, and best estimates are somewhere around 2 million adults in the United States are living with those defects — cases like that of Chris Frey — showing the need for patients to find age-appropriate adult specialists.

"Congenital heart defect is more prevalent than cystic fibrosis," Zaidi said, adding: "But 90% of these patients are not seeing an adult heart disease specialist.

As Lala said: "His story is one that reminds us to tune in and be aware of when your body is trying to tell you something. I think he wanted to focus on the normalcy of his life — and this came as a very sudden jolt or reminder."

Humor to hide the pain

Frey was born with a condition called transposition of the great vessels. Basically, the two major arteries to his heart were reversed, causing blood flow and oxygen deficiencies. He underwent two corrective operations before he was 4, one at Winthrop-University Hospital in Mineola, one at Boston Children's Hospital.

The heart problems and the medications affected his growth. Frey is 5 foot tall, weighs about 115 pounds. He has extensive scar tissue on his chest.

At the beach or the pool he'd tell girls how he'd gotten knifed in a fight. He'd tell his football player friends at St. Anthony's High School he was "the Danny DeVito" of the crowd, making jokes to hide the pain. He came a disc jockey because he figured "all the girls love the DJ," though he remained too intimidated to ask them for dates.

He recalled how once he asked a girl out and how she said no, she was too afraid he would die.

The one saving grace, Frey said, was golf. He became good enough to become a pro at clubs on Long Island, good enough to shoot in the low 70s on his best days.

He met Christine Bencivenga online, both by then in their 20s, and the two soon realized they'd once worked at the same restaurant in Commack. She'd been a waitress; he was a waiter and quit after exactly one shift.

He quit, Frey said, because that first night a worker suffered a massive heart attack and died.

The whole scene hit too close to home.

Still, Christine was the one who told him: "I don't look at height or some medical condition. I love you for you." The two have been married nine years.

During this ordeal, she was his rock.

It began in earnest last Thanksgiving Day. Frey felt tired, tried to dismiss it. The next day a neighbor, who is a registered nurse, said he looked a bit off — and promptly slapped an oxygen sensor on his finger. A handful of alarming readings later, she thought it best he go get checked out.

Frey said he remembers driving to the hospital but doesn't remember anything else — just waking a week later in the ambulance.

'Time is ticking away'

He arrived at Mount Sinai Dec. 6.

"Right away, I thought, 'I'm going to die,'" he said. "You're on the clock and the time is ticking away. My wife, she's a very strong person. She told me, 'Everything is going to be fine. We're going to get you a heart.' Me? I think, 'Am I ever going to see my boys again? Am I even going to survive the surgery?'"

As Christine said: "I never let myself go to that place. It was not something my brain even entertained. I just had this faith — and I don't mean religious faith . . . I guess I just didn't feel like it was the end of his story. I was also just trying to be calm. I didn't want me being upset making it worse. People asked, 'How are you doing this?' My reaction was, 'I took these vows to do this. I vowed in sickness and in health.'"

The transplant surgery began Jan. 25. It ended Jan. 26. Afterward, Frey had to be fed through a feeding tube. Strangely, he spent his days watching the Food Network.

He had to teach himself how to eat, drink and swallow again. He developed an abdominal abscess that required emergency treatment.

Along the way he spent Christmas, New Year's, his wedding anniversary, his wife's birthday, the birthdays of both his sons, in the hospital.

Now his daily routine consists of a barrage of anti-rejection medications: 15 pills every morning, two midday, nine at night.

He is immunosuppressed but got his first COVID shot Thursday.

"So far the heart is doing well, I'm doing well," he said. "And I'm just so grateful to be here. I was always scared to tell anyone how I felt, because I always felt like if I do I'm going to die. Now I want to talk to others, especially kids, to let them know it's OK to feel what you feel. That you should tell others what's going on with you."