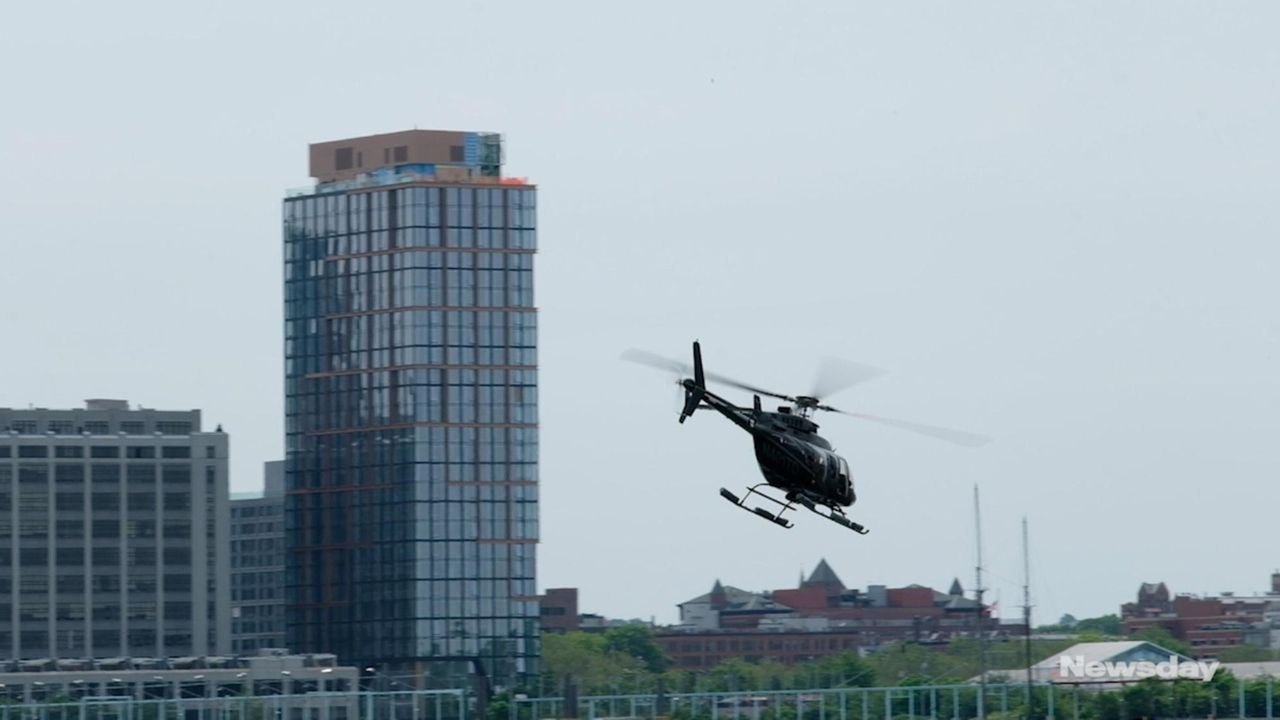 In the wake of the recent crash of a helicopter in Manhattan, which killed the pilot, lawmakers are arguing for ways to regulate chopper traffic, which is raising both safety and quality-of-life concerns.  Credit: Jeff Bachner; Newsday / Matthew Chayes

Long Islanders on the East End have had concerns about helicopters for a long time: The noise, the air traffic, the emissions that foul up the air.

For Patricia Currie, the danger of the helicopters swarming over the Island touched a nerve Monday when one crashed onto the roof of a skyscraper in midtown Manhattan. The pilot, flying alone, was killed.

A steady stream of helicopters go in and out of East Hampton Airport, near Currie's home in Noyack. She figures it's only a matter of time before one crashes.

"It's not a question of if it will happen here. It's a matter of when," said Currie, a business consultant who co-founded a group that wants East Hampton to close its 628-acre town-run airport. "In my mind, there is no doubt."

Rep. Carolyn Maloney (D-Manhattan) has been calling on the federal government for 20 years to ban sightseeing and private-transit helicopters from flying over New York City. Monday's crash re-energized her campaign.

"We cannot rely on good fortune to protect people on the ground," Maloney said.

On the East End, helicopter charter business is booming. In roughly a half-hour, the well-to-do can go from Manhattan or Westchester to their summer homes in the Hamptons — and not worry about the bumper-to-bumper line of cars snaking along the Long Island Expressway.

Teresa McCaskie has had it with the countless helicopters crossing over her Southold home. She's tired of the rattle of rotors waking her up. And she has had enough of not being able to carry on a conversation in her front yard because of a helicopter overhead.

"It's even difficult to entertain," said McCaskie, a member of Southold's Helicopter Noise Steering Committee. "There's no enjoyment in this. We have no quality of life."

East Hampton Airport, which is in Wainscott, is the most frequently used helipad on the East End — and is becoming even busier, numbers show. Summer is a particularly hectic time, with regular weekenders and vacationers.

In 2015, the town board restricted late-night and early-morning flights. Friends of the East Hampton Airport, a coalition of nine aviation ally groups, sued to block the restrictions. The town fought back but eventually lost. A federal appeals court ruled that only the Federal Aviation Administration can control airport operations.

With their legal options exhausted, East Hampton officials are considering whether to repurpose the airport. They can't shut the airport until 2021 — 20 years after the town last accepted federal grants to operate the airport.

The Eastern Region Helicopter Council, an advocacy group for helicopter pilots, is pushing the town to keep the airport open for the sake of the small businesses that rely on it.

"The East Hampton Airport is a vital economic engine for the region and is already one of the most tightly restricted airports in the nation,” the group said in a statement last year.

But closing the airport isn't just about the noise anymore; it's about safety, too, said Southold Town Supervisor Scott Russell.

"There are thousands of schools, homes and families under the flight path that face a real health risk," Russell said. "Do we need to wait for tragedy to happen before we take action? It's only a matter of time before a pilot shows poor judgment over the North Fork."

All the noise complaints from homeowners in Nassau and western Suffolk led the FAA to create the North Shore helicopter route.

Really a rule rather than a route, helicopters have to fly over the water along the North Shore at an altitude of 2,500 feet until they reach the Twin Forks, then they can head south.

Pilots can take a different path or fly at a higher altitude, the rule states, "when necessary for safety, weather conditions, or transitioning to or from a destination or point of landing."

North Fork communities in Southold and Riverhead towns take the brunt of the noise when the helicopters move over land and head into East Hampton.

A 2018 funding bill required the FAA to reassess the North Shore route, which expires next year. The agency is reviewing public comments, said spokesman Jim Peters.

East End advocates are pushing for a more direct South Shore route to East Hampton. Pilots, though, don't like the path because they would have to fly lower over Kennedy Airport and cross directly over some of the most expensive properties in East Hampton Town, disturbing the A-listers.

Another option is an all-ocean route that would require pilots to cross Orient and Plum Island and loop back to the airport, adding five to 10 minutes to the roughly 40-minute trip.

“For safety and sanity during summer months, we need to extend the North Shore route around Orient Point and establish an all-water route on the South Shore to provide permanent relief from the incessant drone of low-flying helicopters bound for the East End,” Schumer said.

Oyvind Vataker flies back and forth from the Hamptons several times a week as chief pilot with Helicopter Flight Services Inc. in Linden, New Jersey.

He knows residents don't like the noise and he does his best to change up his route and begin his descent as late as possible.

"The problem right now is the noise is concentrated in the same spot," Vataker said. "It's a challenge. We are creating a highway in the sky."

Monday afternoon was rainy and foggy.

Tim McCormack wasn't certified by the FAA to use instruments to help him fly in bad weather and was cleared to fly using only visual flight rules, which require clear skies and three miles of visibility.

And he was flying in restricted airspace without permission. The high-rise where he crash-landed Monday is on Seventh Avenue, only blocks from Trump Tower, where President Donald Trump has a home.

Hours after the crash, Maloney was demanding a crackdown on helicopters and pledging to draft legislation that would require the FAA to restrict New York City's airspace.

"It is past time for the FAA to ban unnecessary helicopters from the skies over our densely-packed urban city," Maloney said. "The risks to New Yorkers are just too high."

The FAA is waiting for the outcome of the crash investigation before it will consider any changes, said Peters, the spokesman.

To Al Yurman, a retired air safety investigator with the National Transportation Safety Board, banning all helicopter flights would be an overreaction.

"There's plenty of regulations," said Yurman, a former Army helicopter pilot who has investigated about 500 helicopter crashes. "It's unnecessary. … It's like saying, 'no more power boats in the Hudson River.'"

The number of helicopter crashes nationwide has been dropping in the past few years, according to the National Transportation Safety Board. The total stood at 128 in 2017 and 127 in 2018; the figure is 52 so far this year, NTSB data show.

Past crashes have precipitated changes. For example, more restrictions were put in place after rotor blade broke off a helicopter in 1977. The helicopter crashed on the roof of Manhattan's Pan Am building, killing five people.

New York City Mayor Bill de Blasio is considering whether to tighten helicopter regulations and the City Council has bills pending that would restrict how and where helicopters could operate in the city.

"Unless they're totally necessary, I think we need to look at cutting them down," Johnson said at a news conference Thursday. "I think there needs to be a conversation about — not just tourist flights — but other type of flights as well. Do we need that many? What are the safety precautions? How do we protect the quality of life?"

The helicopter tourism industry acknowledges the noise and air pollution concerns, and wants to work with lawmakers. In a 2016 compromise, the industry agreed to halve the number of helicopters taking off from the city heliports and to bar flights on Sundays.

"We believe the best solution is always the safest solution," said Sam Goldstein, a spokesman for the Manhattan-based Helicopter Tourism & Jobs Council, a trade group. "And that is what we try to do — fly as safely and as neighborly as possible."

FAA: Pilot was not certified to fly in bad weather

The pilot who flew in dense fog and crash-landed was not certified to fly in poor weather conditions, officials said.