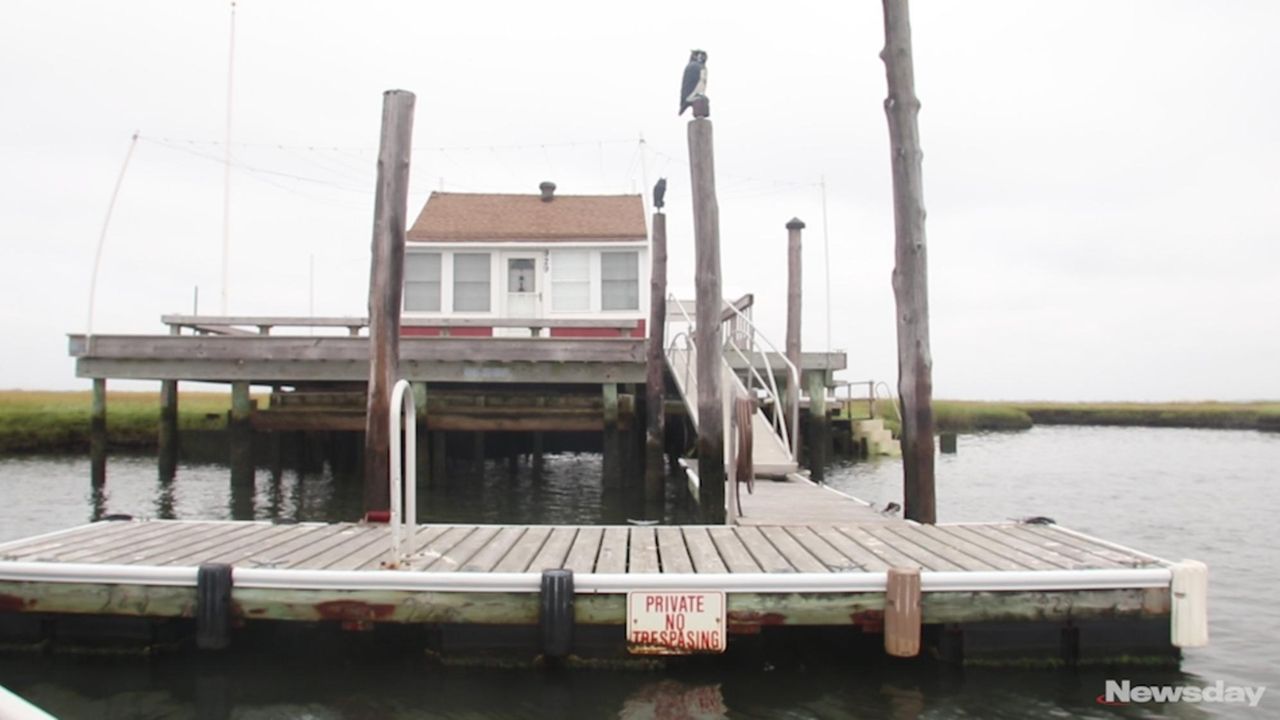 Nancy Solomon is the driving force behind Long Island Traditions' mission is to document, present and preserve the local traditions of the bay houses, their architecture and the  maritime culture they represent. On Sunday, Sept. 17, 2017, she  spoke about her group's upcoming exhibit, "In Harm's Way," which is opening at the Long Island Museum of American Art, History, and Carriages in Stony Brook. Her goal is to help Long Islanders think and prepare for hurricanes and heavy storms. Credit: Jessica Rotkiewicz

Time and tide were running out on a recent Sunday morning when Nancy Solomon, executive director of Long Island Traditions in Port Washington, boarded Alan Pidherney’s fishing boat at Sea Breeze Park on Freeport’s Nautical Mile. They had a brief window to make a round trip to Pidherney’s bay house on Middle Island, a patch of marsh in a section of the Western Bays north of Lido Beach, before low tide risked impact with a sandbar.

“I’m actually the mayor of Middle Island, a self-imposed title,” Pidherney, 72, of Baldwin Harbor, joked as he pulled up to the dock at the bay house he inherited from his late wife. He, his three children and four grandchildren use the house, one of only two structures on the island, for recreation during the summer months.

Were it not for Solomon, a Westchester native who first saw the bay houses on another boat ride 30 years ago, and her determination to save them from extinction, Pidherney’s and many of the little houses on the marsh might be long gone by now, according to bay house owners.

Like many bay houses, Pidherney’s was severely damaged by Hurricane Irene in 2011, and battered again by superstorm Sandy in 2013. Sandy engulfed it in 3 feet of water and left a hole in the east wall. But Solomon’s three decades of research and photos helped put it back together.

“This is a house that was built in the 1930s by the Bedell brothers, who were members of one of the earliest settling families on the South Shore of Long Island,” Solomon said, drawing on her extensive knowledge of South Shore history. She’s also using her expertise to help Pidherney make his house eligible for listing on the National Register of Historic Places.

Pidherney is among many locals who have embraced Solomon, once an outsider, as one of their own. But it took lots of water under that particular bridge.

“When Nancy came 30 years ago, my neighbors said, don’t let her near the houses. She going to open up a can of worms, and we’re going to lose the bay houses,” Pidherney said, adding, “but they were wrong.”

Long Island’s bay houses were facing an uncertain future in the 1980s — some wracked by hurricanes, others torn down by the town. “The Town of Hempstead tore down hundreds of bay houses at the insistence of the federal government under the Clean Water Act,” Solomon said. Most of the surviving bay houses are owned by individuals under leases from the Town of Hempstead. They can’t be bought or sold, only inherited or transferred to a close friend or family member who have been caretakers of the property.

For 30 years, Solomon has battled the effects of the elements, bureaucracy and even resistance from some of the bay house owners to rescue houses that for generations had been way stations for commercial fishermen, and winter refuges for professional duck hunters. The bay houses are all on islands in waters west of Wantagh to the Five Towns area.

Her nonprofit, Long Island Traditions, has also documented the traditions of African-American quilters and gospel singers, immigrant Dominican musicians, and Portuguese and Greek dancers on Long Island. But her magnum opus may well be “In Harm’s Way,” an exhibition she guest-curated at the Long Island Museum in Stony Brook that runs through Dec. 31. A miniature bay house is displayed among the artifacts, hands-on activities and photographs illustrating how Long Islanders recover from natural disasters.

Town of Hempstead officials praise Solomon for her bay house advocacy. Conservation and Waterways Commissioner Thomas Doheny acknowledged Solomon’s work “to preserve the bay houses, the maritime fishing traditions of clamming, harvesting bait, living on the bay and the life histories of baymen and maritime folklore.” Doheny said Solomon has helped the public appreciate the importance of baymen, the bay houses and “the skills that enable people to earn a living on the bay.”

Solomon is an unlikely champion of South Shore traditions. She was born and raised in Mamaroneck, in Westchester County, where her experience of maritime life had been limited to growing up across the street from a boat yard. In the years between earning a bachelor of arts degree in art history in 1979 and a master’s degree in American Studies and folklore in 1985, both from George Washington University in Washington, D.C., she had worked at the Mary McLeod Bethune Memorial Museum. At the African American history museum in Washington, her job responsibilities included taking oral histories from women of the civil rights movement. Her first graduate school project sent her to a historic African-American farming community outside of D.C., where she regularly attended church to study gospel music. “People were very welcoming. They often invited me to Sunday dinner afterward,” she recalled.

Her first job after graduation, at the Vermont Division for Historic Preservation in Montpelier, however, wasn’t quite what she was looking for in a career.

“I became a very good skier,” Solomon said, laughing. But, she added, “I missed connecting with people in the communities. I was a bureaucrat, and I felt very isolated, and I wasn’t inspired.”

Solomon found those community connections here — and launched a new career as one of Long Island’s most well-known folklore experts — when she met bayman Cory Weyant on Freeport’s Nautical Mile.

It was Solomon’s first day on the job at the Long Island Arts Council in Freeport. The nonprofit organization had tasked Solomon with developing maritime-heritage programs for the public. And, here was a real live bayman, offering to share his traditions with her, albeit on his own terms.

“He [Weyant] said, ‘If you want to really learn about us, we’ll go eeling and crabbing,’ ” Solomon recalled. Then, Weyant added ‘We leave at 4 in the morning,’ ” Solomon said. “I think he was testing me.”

The next morning before dawn, Solomon showed up with her tape recorder and camera at the trawler Weyant was crewing on, which was filled with the tools of the commercial fisherman’s trade — nets, traps and bait.

“During that boat ride, we were literally coming out of Woodcleft [canal] and I saw these houses,” she continued, “Corey said ‘Those have been built by baymen and duck hunters and bay rats for generations.’ ” Weyant urged Solomon to “do something about those houses because they are going to get rid of what’s left, which is not much.”

The next day, she made her case to the Town of Hempstead, which had been tearing down bay houses to protect the fragile wetlands. “I asked if they were documenting or doing oral history of the houses they were taking down, and I told them, ‘You are violating the National Historical Preservation Act and the National Environmental Protection Act.’ ”

“Between the 1960s and by the time I got there, probably about 200 bay houses had been destroyed,” Solomon said. “The ones that were left were owned by families that had been in them for many generations.”

WINNING OVER THE LOCALS

She developed a reputation as a young woman who wasn’t afraid to get her hands dirty and her sneakers wet in pursuit of photos and stories.

“We hope people will learn to protect their own coastal homes whether they are on the bay or a canal,” said Solomon, who is married to Nick Santora, 62, a middle school social studies teacher in Queens.

In summer, Solomon leads tours of the bay houses out of Freeport, where you can get a closer look at some of the 33 bay houses, which she believes hold lessons for other waterfront communities.

“Because bay houses survived storms and hurricanes over many generations,” Solomon said, “there could be some very important things to learn about their architecture and design.”

Her interest in bay houses also led to a taste of local cuisine.

“I was documenting their lifeways, and that included food gatherings at the bay houses, where they were often making chowder” and eating clams that had been in the water an hour before, Solomon said. “They also taught me how fragile our ecosystem is. I could literally see the marshlands eroding in front of me.”

Cuomo: State relaxing documentation rules in rent relief app: Cuomo
Adelphi says all students must take COVID-19 jab by fall
1:59
Bellone: Suffolk Police Department to discipline two officers involved in misconduct
2:47
Grieving wife's dilemma: How to tell her children their dad is gone
1:19
Jones Beach lifeguard reports being bitten by shark
Forecast: Sunny Tuesday but then rain will arrive
Didn’t find what you were looking for?