In the year 1750, the prosperous Oyster Bay merchant Samuel Townsend sent out his sloop Solomon under Capt. John Jones on a voyage to the Virgin Islands. The single-masted ship was loaded with cargo: 76 barrels of flour, 26 barrels of pork, five quarter-barrels of butter, four casks of hams, beef and tongues, 4,250 barrel hoops, seven geese and 20 bushels of corn.

By the middle of the 18th Century, Long Island was no longer a rural backwater. It had progressed well beyond the early colonial subsistance level, where individual farmers lived in isolation and produced only what they themselves used. What Townsend was selling to the Virgin Islanders was the excess product of a bustling Long Island economy.

The ship would not come back empty, for the West Indies had products that Long Islanders and other New Yorkers wanted to buy, including rum, molasses, sugar and indigo. Other Townsend ships sailed to New York to buy British imports, like glassware, cutlery and expensive fabrics of all kinds, for resale in his general store in Oyster Bay. 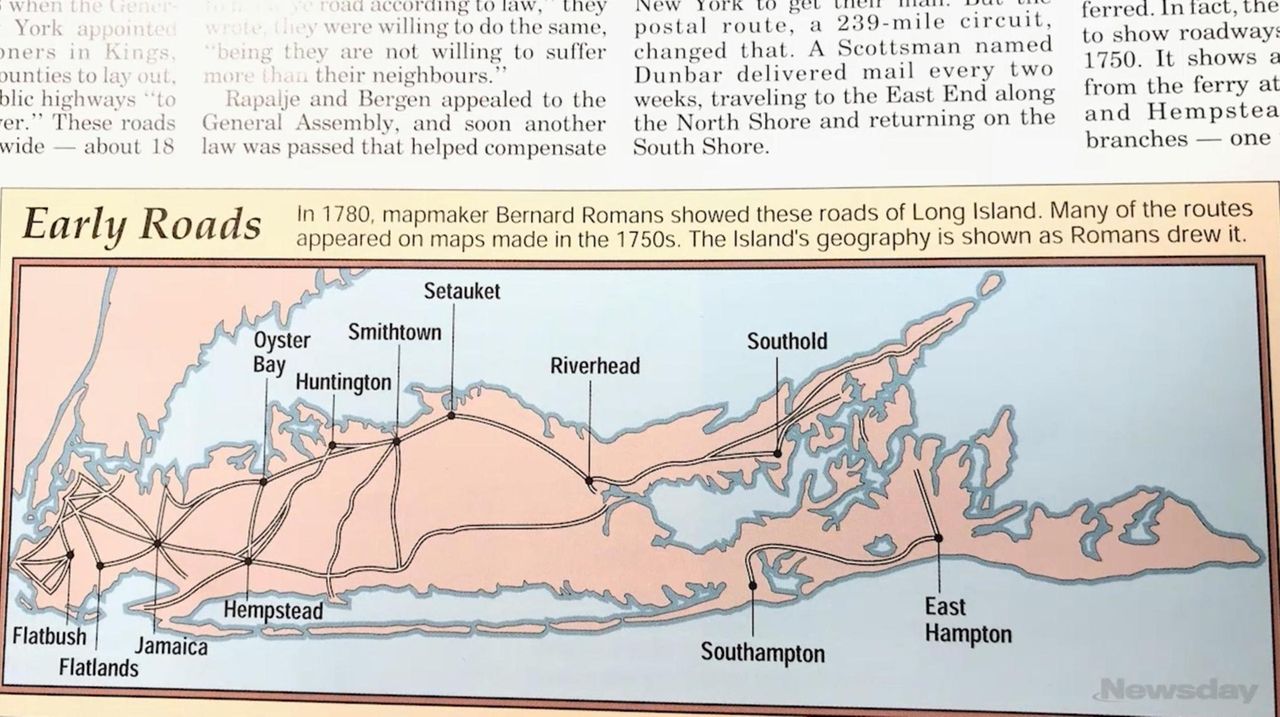 LI: Our Story / Historic highways and byways The roads of Long Island begin to evolve from Indian trails through forests and fields to dirt roads that will become the highways of today. Credit: Newsday

Ports on Long Island’s North Shore were important points of entry for goods coming into the New York colony -- both legally and illegally -- as early as 1699, according to an entry in the journal of the Provincial Assembly: “A third part of the goods imported into the colony of New York were run into the four ports on Long Island, viz.: Setauket, Oysterbay, Musketo Cove and Southold.’’ In the next 50 years, Sag Harbor and other ports would also become important.

Agriculture still dominated the Long Island economy in the late colonial period, and that included the raising of beef cattle, sheep and hogs. But as communities began to grow, they increasingly needed craftsmen to produce items that once might have been made at home. Millers, carpenters, weavers, tailors, brick makers, coopers and blacksmiths were in demand. But smaller communities could not support full-time specialists, so these early craftsmen often had to do more than one thing.

“Thus a farrier not only shod horses but worked as a blacksmith as well,’’ wrote John H. Braunlein a few years ago in “Colonial Long Island Folklife.’’ “A cabinetmaker might advertise himself as a carpenter, a joiner, and a wheelwright ... A potter also might make shoes; a blacksmith might also be a capable mason.’’

Then there was John Stuard, who in July, 1691, applied to the Town of Hempstead for 18 to 20 acres of tillable land near Plain Edge for his growing family. He offered his skills in return: “I am willing to settle among you, to follow the trade of a cooper, as also to practice the art of surgery.’’

In 1759 the Universal Gazeteer was published in Dublin, Ireland, and this is how it described Long Island: “The island principally produces British and Indian corn, beef, pork, fish, etc., which they send to the sugar colonies, from where they receive in return, sugar, rum, cotton and indigo; they also have a whale fishery, sending the oil and bone to England, in exchange for cloths and furniture. Their other fisheries here are very considerable.’’

Very considerable, indeed. Long Island’s surrounding waters were as fertile as its land. Clams, oysters and scallops were abundant, as were a variety of fish, and much of this harvest was shipped to New York at a nice profit.

For some on the South Shore, there were profits also in whales that were driven ashore. An item in the Feb. 4, 1754, New York Mercury read: “Last week a small whale, twenty feet long, was towed up to New York by a sand boat from Rockaway, where it was found floating near the shore by some clammers.’’ By this time, however, whales were disappearing, having been driven farther out to sea, and the whaling industry would not revive for another century, when commercial boats from Long Island would put out to sea in quest of huge profits.

Farmers were becoming entrepreneurs. “Progressive farmers, during the winter, built for themselves serviceable, sea-going boats such as sloops or two-masted schooners,’’ Islip historian N.R. Howell wrote in 1949. “When their crops did not need attention they could take a load of wood to the city and bring back a load of horse manure for their farms. As the size of New York City increased, the farmers transported many cargoes of hay and grain for the horses of city folks.’’

With the waterways, especially Long Island Sound, being used as colonial highways, a shipbuilding industry developed, especially on the North Shore, with its better harbors and its forests. This meant a healthy economic stimulus to places like Southold, Setauket and Oyster Bay.

Payment for goods and services presented a great problem on colonial Long Island, as elsewhere. The British Parliament did not allow the export of English coins, and it refused to allow a separate mint to be established in America. As a result, the colonies relied heavily on silver and gold coins from Spain, or sometimes Portugal. But until individual colonies began emitting paper money during the late colonial period, much trading was done by barter.

``The services of surgeons, weavers, hatters, sailors, merchants, masons and other tradesmen were occasionally paid for in cash,’’ Braunlein wrote. ``More often, however, their labors were repaid in goods, for the economy of colonial Long Island was one of barter. Corn was exchanged for shoes, chairs were offered for rum, and weaving bought flour and butter.’’

All in all, Long Islanders in the late colonial period were doing well. Experts on the colonial economy such as Edwin J. Perkins have concluded that the general standard of living in the 13 colonies was the highest in the world by the 1770s, on the eve of the Revolutionary War.

In fact, Perkins says, when war came, colonial soldiers were normally two inches taller than recruits entering the service of the British Royal Marines. This, he says, is probably because they ate more meat.

'Massive' fire at Westbury facility suspends LIRR service on 2 branches, railroad says
1:48
'You can almost watch it grow': The promise of a new LI cash crop
1:41
Amityville school district probes racist comment allegedly made by staffer at football game
1:37
When was the last time you saw a dentist? COVID-19 fears take toll on care
1:41
Teen creates art kits for mental health center
Nassau School Notebook: Teams in Science Olympiads
Didn’t find what you were looking for?