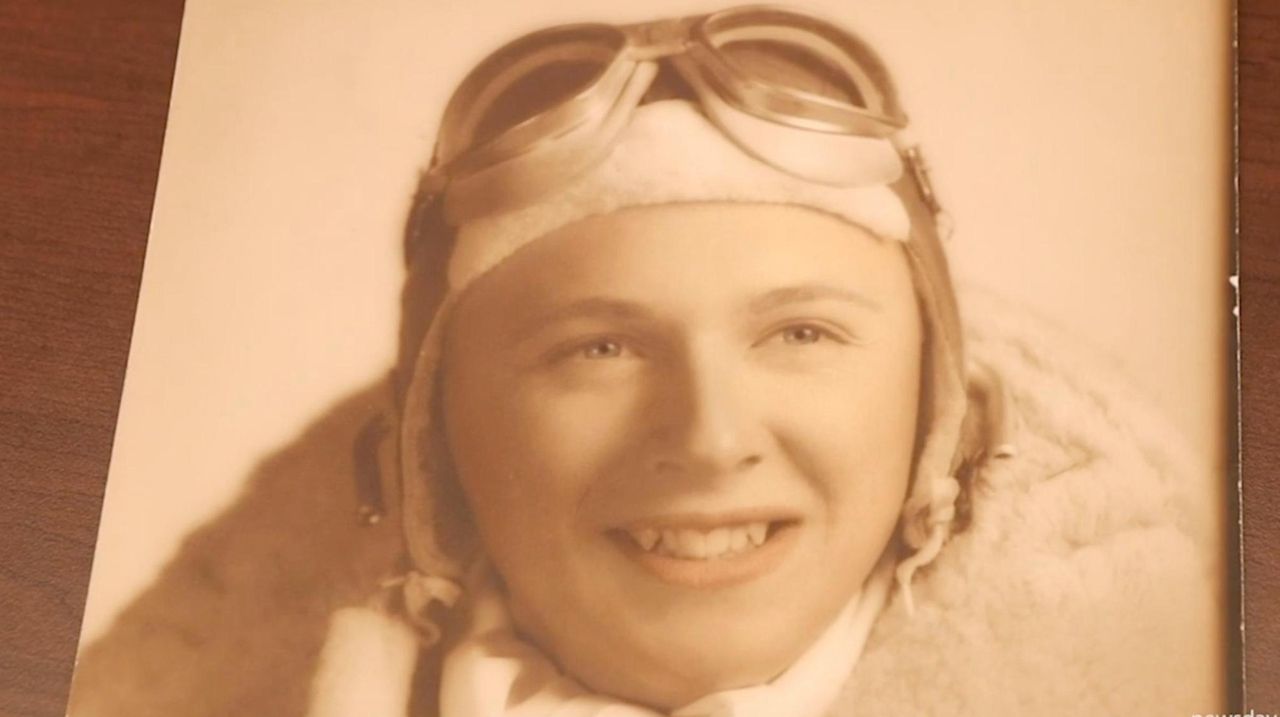 A World War II parachute, credited with saving the life of a service member, was turned into a wedding dress. The 75-year-old dress will soon have a new home. Credit: Howard Schnapp

Air Corps Lt. George E. Braet and his B-17 bomber co-pilot were taking heavy enemy fire over France in 1944 when flak pierced the side of the aircraft and became wedged in his parachute — which stopped it from hitting him.

Braet would return home to Wisconsin the following year with a memento from the war: the parachute that had likely saved his life.

His fiancee, Evelyn Boyle, took one look at the bullet-ridden silk parachute — long before the advent of nylon — and knew instantly. This would be her wedding dress.

Next week, 75 years after George and Evelyn tied the knot, the silk parachute dress, yellowed with age but still intact, will be donated by their daughter, Sister Kate Braet, to the Cradle of Aviation Museum in Garden City for a potential temporary exhibit.

"It really belongs to more than us because of the story that it tells," said Kate Braet, 66, a sister of Saint Joseph who lives in Merrick and will soon move to a convent community house in Bay Shore. "It tells the story of the homefront. It tells the story of the wartime. Talk about a parachute as saving life. Look at what it did in terms of their future together. It was the parachute that carried them into the future."

George and Evelyn Braet were married in 1945 and moved to Long Island in 1963, when Kate was in second grade. The couple, who eventually settled in Hauppauge, had five children; before they moved to Long Island, the kids would sometimes transform the dress into a tent as it hung in the closet.

George Braet died in November 2005, four days after the couple's 60th wedding anniversary. Evelyn Braet, a secretary who would visit the local USO office during the war and dance with service members to lift their spirits, died in 2009. They were each 85.

"The dress and their marriage stood the test of time," Braet said.

Cradle of Aviation curator Josh Stoff said the museum will take possession of the dress next week and put it in storage. The museum laid off most of its employees during the pandemic and does not have the staff to create a new exhibit at this point, Stoff said.

A temporary exhibit, he said, is possible down the road, although long-term exposure to light will likely damage the antique silk.

"It's an interesting story," Stoff said. "We do try to tell the story not just of airplanes here but also of people, too."

The story of the World War II parachute that became a dress is one of ingenuity, bravery and more than a bit of good luck.

George Braet enlisted in the U.S. Army Air Corps, the precursor to the Air Force, in 1941 and completed 53 missions in the European theater, earning countless medals and honors.

He flew a plane known as the "Flying Fortress" with a group of soldiers who called themselves "Nine Yanks and a Jerk," as the crew was composed primarily of northerners and one member from Atlanta.

On Feb. 4, 1944, Braet was participating in a bombing mission against the Germans when he was attacked by 20 enemy fighters, according to Army records.

"In the ensuing engagement his aircraft was seriously damaged and a fire was started among the ammunition which fell out of the top turret," Army officials wrote in awarding Braet the Distinguished Flying Cross for bravery in action. "With complete disregard for his personal safety, heedless of the intense heat and exploding ammunition, Lieutenant Braet made his way to the fire and fully extinguished it."

Six weeks later Braet went to a rest camp. Four days later, while he was taking time off, his team was reported missing in action over North Africa.

After the war, Braet, who would spend the bulk of his career in airplane supplies, was allowed to keep the unusable parachute.

In addition to the bullet holes, the parachute at each seam had a three-inch AN [Army Navy] stenciled in dark blue ink, Evelyn Braet wrote in an article years later for Reminisce magazine.

A local dry cleaner declined the project, citing the work hours involved, but provided Evelyn with the liquid solvent and brushes to remove the lettering herself.

"So for about two weeks every day after work I went to the dry cleaner and tap, tap, tapped at the ANs — no brushing — that would shred the silk," she wrote in a letter to the magazine. "I found a wonderful dressmaker who accepted the challenge and the result was lovelier than I had dreamed possible."

The dressmaker stitched together triangles of intact silk from the damaged parachute to create the finished gown.

Kate Braet, who served three years as an Army medic eye specialist, said she hopes the dress helps educate the next generation about the sacrifices of the fighters and the ones they left at home.

"And to look at it and see that in the midst of it, a parachute — made to save someone from crashing a plane — could be used in the most wonderful experience of a woman and man's life. Their marriage."