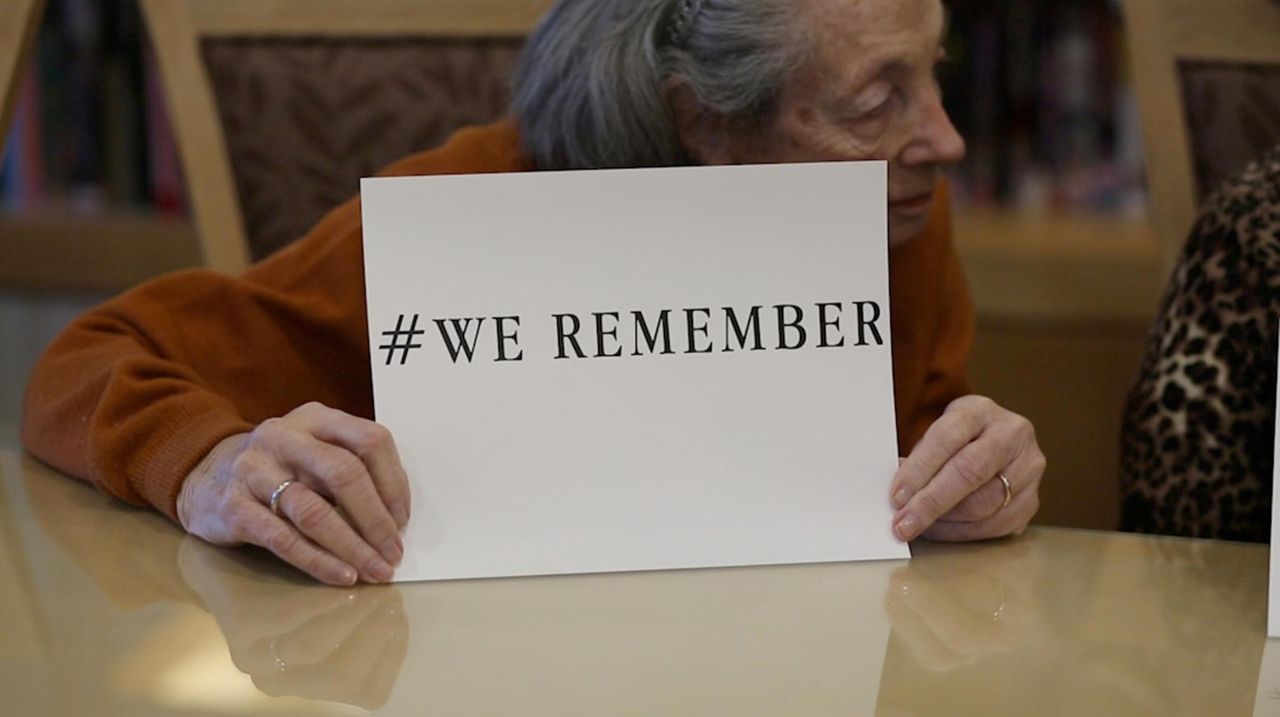 Ruth Meador shared on Tuesday, Jan. 22 the story of how she survived the Holocaust. Meador, 87, lives at an assisted living center in Commack. Credit: Barry Sloan

Ruth Meador grew up in an Orthodox Jewish home in 1930s Germany.

In 1935, Adolf Hitler and his Nazi Party had been in power two years — controlling virtually every aspect of daily life.

Meador was all of 4. She remembers what happened in bits, the way little ones do. Where she could play. What her parents told her.

Ahead of International Holocaust Remembrance Day, Meador and seven others came together to share their memories of that dark time so long ago. Sunday's commemoration falls on the 74th anniversary of the liberation of Auschwitz-Birkenau concentration camp.

The eight all live at the Gurwin Jewish-Fay J. Lindner Residences in Commack. The first thing they did Tuesday was pose for a group picture. Then, one by one, they talked about their early lives. For a few, the years have muddled their memories.

At 87, Meador is the youngest of the group. Her clearest recollection is of Kristallnacht, the "Night of Broken Glass."

On Nov. 9, 1938, Nazis trashed and looted Jewish businesses, schools and homes, and killed dozens of Jews. The German police simply stood by.

That night, without turning on the light, Meador's mother came into the bedroom that she shared with her older sister, Marion, and handed them their clothes. Then, quietly, the girls and their parents squeezed into the bathroom.

"I remember hearing the most terrible sounds — people being hurt, screaming, and things being broken like dishes," Meador recalled.

The doorbell rang. Outside were two members of the Gestapo, who ordered her father to come with them. He ended up — like tens of thousands of other Jewish men on that night — in a concentration camp.

In that instant, her mother was left raising two little girls. She learned of a Dutch social worker, Truus Wijsmuller, who was moving hundreds of Jewish children whose families wanted them to go into hiding.

"She was not Jewish, but she had a lot of guts," Meador recalled of Wijsmuller, who is mentioned in oral histories archived at the United States Holocaust Memorial Museum in Washington. "We call that chutzpah."

Meador and 80 other children boarded a train to Amsterdam with German soldiers. Her sister left a week or two earlier. Not long after the girls fled, their mother was sent to a concentration camp.

"The German soldiers were very mean, especially to the little children," Meador said of the train ride. "Each child carried a small suitcase, and they (the soldiers) would open them and dump out the contents. They would take things and throw them out the window."

In Amsterdam, Meador was placed in a shelter. She remembers crying and a woman asking her why she was so sad. She missed her sister, she said.

The woman picked her up and sat her on a bed, where someone was under the covers.

"It was her," Meador said of the planned surprise. "My sister."

From the shelter, Meador was sent to an orphanage. Her sister, three years her senior, was moved into a home where she took care of a family's children.

By 1939, Holland was no longer safe from the Nazis, and Meador was moved again — this time to England. There, she lived with couples who took in Jewish children. She remembers her caretakers as if they were her own relatives. She called them Aunt Millie and Uncle Fred, Aunt Phyllis and Uncle Izzy.

Then three years later, Meador learned she could go to the United States. Her father was waiting for her there, she was told.

Only 12, Meador traveled by ship — alone. She was given specific instructions on what to do when she arrived in New York: She should go with the person who called her by name.

Minutes after Meador stepped onto American soil, a man met her but he said nothing. They walked together in silence to the subway. Then, the man spoke in broken English.

Her father looked nothing like how she remembered him. His time in the Buchenwald concentration camp had taken its toll: his hair had grayed, his skin had a sallow look.

"It killed half of him," she recalled.

Father and daughter started a new life, just the two of them. They didn't know where her sister was and her mother had died from typhoid in the concentration camp.

Meador went on to graduate from George Washington High School in Manhattan and nursing school. She eventually found her sister with the help of the Red Cross.

In 1955, she married. She and her husband, Louis, have two sons, David and Ron. The couple still live together, at the assisted living center.

When Meador looks back on her early years, she thinks about all the good people who helped her and how fortunate she was when so many others lost their lives.

Herman Gancz and his brother, Anton, were sent to the Furstengrube concentration camp in Germany. Gancz was 14, his brother about a year younger.

In January 1945, they were ordered to move to another camp — on foot.

They had been walking for two days and nights, with little if anything to survive on, when Anton became too weak to walk on his own. Herman knew what happened to prisoners who fell out of line. He had seen it.

"They would have killed him," Gancz recalled. "I couldn't carry him. So he held on to me."

They kept walking. And they made it.

The brothers eventually made it to America. They stayed close all their lives. They never spoke of that time.

Anton died about two months ago. He was 88.

Rose Ashkenazy was born in Poland. She was 11 when World War II broke out.

She remembers hiding in the woods near the Russian border with her parents and sister.

They slept behind trees. They had virtually nothing to eat.

"We would knock on a door" and beg for food, she said. "Sometimes we got a raw potato or a piece of bread."

Life outdoors, for them and other Polish Jews, went on for a couple of months. Then, the Germans discovered their hiding place. She remembers the military planes overhead, shooting down at the ground.

She was hit, twice in the arm. Her family somehow managed to get her to a hospital.

"We survived," she said.

For Tina Kamin, it's the blaring loudspeakers that are seared into her memory.

The loudspeakers in her Polish town warned that men should flee from the Nazis. Soon after, soldiers came in and rounded up groups of men.

Her family fled into the woods. It was in the bitter cold of winter and her mother dressed her in layers of dresses, socks and undergarments.

She was so cold she cried. She recalled one sleepless night in particular.

"I held my nose all night," she said. "I was afraid it would fall off."

Ruth de Beer was 7 in 1933 when the Nazis started replacing books with magazines that depicted Jews as thieves and worse. Even so young, she could feel the hate.

A Hitler youth stood in front of her family's clothing store with a sign telling customers they shouldn't shop there because the shop was run by Jews.

A message was scrawled on the store window: "Don't shop here. Jews." The store's six workers were no longer allowed to work there, she said.

"A youth group marched through the streets singing anti-Jewish songs," she said. The lyrics of one song went "something like, 'If Jewish blood runs from our swords, we will be happy.' "

Her parents sold the store and the family moved to Palestine, the area now known as Israel.

Sally Birnbaum saw the inside of four concentration camps in Germany.

She was about 17 then. She remembers a wooden bed that six prisoners squeezed into. It was so crowded that everyone had to turn over at the same time, she said.

She remembers dinners of watery soup and a piece of bread.

She lost her younger sister, Gertrude, to the Nazis.

Her sister had fallen ill and was recovering in the camp infirmary. Camp officials came in, intent on selecting sick people for extermination.

"She hid on top of the bunk bed," Birnbaum said. "They found her and wrote down her number."

A short time later, Birnbaum went to visit her sister.

"She was crying," Birnbaum added. "I was crying."

Lastly, she remembers how the end of the war came to the camp.

"We saw the Germans disappearing," she said.

Then, she saw Russian soldiers. She remembers what they told her: "You're free."