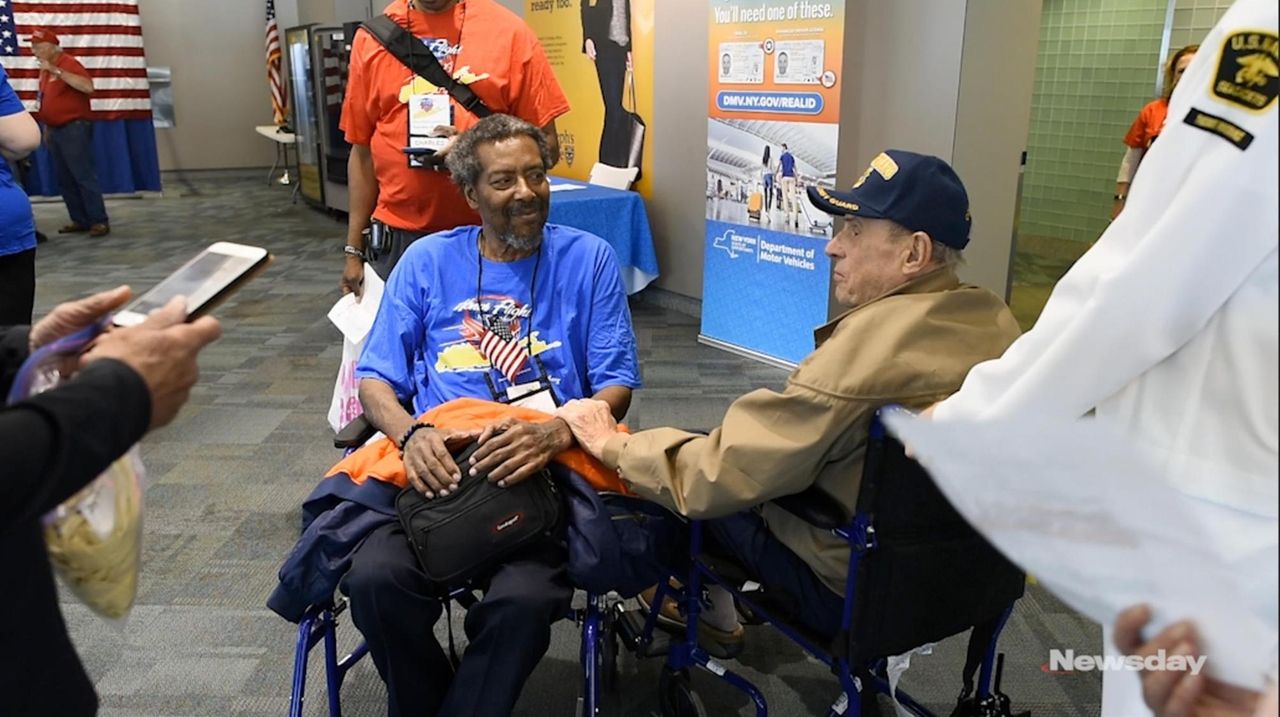 Honor Flight Long Island takes aging veterans on one-day trips to see America's war memorials, providing them with the plane fare, bus transportation and food. Each vet is accompanied by a volunteer "guardian," who pays $400 and helps the vet get around for the day. Sarah O'Connor, 39, of Cold Spring Harbor, was guardian for WWII and Korean War veteran Hugh Niland, 89, of Lindenhurst, on Saturday, Sept. 21, 2019. Credit: Newsday / Johnny MIlano

Hugh Niland and Sarah O'Connor didn't even know one another before Saturday morning. But at 11:30 a.m., the two took off on an adventure through our nation's history, and in the process learned a lot about each other.

Niland, a veteran of both World War II and the Korean War, and O'Connor, a wife and mother involved in veterans causes, were paired on a day trip to the nation's capital sponsored by Honor Flight Long Island.

The group takes aging veterans on one-day trips to see America's war memorials, providing them with the plane fare, bus transportation and food. Each vet is accompanied by a volunteer "guardian," who pays $400 and helps the vet get around for the day.

O'Connor, 39, of Cold Spring Harbor, was selected as Niland's guardian for Saturday's trip. She's been fascinated with veterans since she was a girl listening to her grandmother's stories about family members who served.

Both her grandfathers served in the Korean War. She had five relatives in the Civil War, and she's found 32 relatives who fought during the Revolutionary War.

"For me, I feel like it's an honor to be with them and meet them," O'Connor said of volunteering for the Honor Flight. "It gives me the opportunity to make someone feel appreciated. It makes my heart warm."

Niland and O'Connor met for the first time at about 9:30 a.m. in the lobby of Long Island MacArthur Airport in Ronkonkoma. While the other vets and their guardians checked in, the two sat down and started a conversation that never seemed to end.

O'Connor is a genealogist who's identified family members in every major American conflict since the Revolutionary War.

Niland, 89, of Lindenhurst, joined the Merchant Marines in the tail-end of World War II and served in the Army during the Korean War.

Right away, Niland perched his sunglasses on top of his head and started telling his story of riding out a typhoon on a ship headed to Korea. As the ship was pummeled by high waves and wind, life boats broke loose and sections of the ship's steel were bent, he recalled. One man died and several others suffered broken limbs and had to be taken to a military hospital.

"We brought them booze and got them all drunk," Niland said with a laugh.

O'Connor leaned forward so she could hear more. This was just what she wanted from this trip.

A member of the Daughters of the American Revolution, O'Connor has restored and placed wreaths on veterans' graves, and served as a pallbearer at donated funerals for vets whose bodies were not claimed by any family member.

For a time, Niland and O'Connor seemed oblivious to the 50 veterans and equal number of volunteers arriving, getting their Honor Flight T-shirts, and building a buzz of conversations amid the small airport.

The Long Island chapter of Honor Flight, which started in 2006, has flown more than 1,500 vets to Washington. It is among 131 Honor Flight chapters across the United States. Many of the vets and guardians are sons and fathers or in some way related, but others are strangers who come to know one another for the first time.

In the past, vets and guardians have remained close, getting together for lunches and even inviting each other to family gatherings.

"These relationships blossom," said group secretary Virginia Bennett, who was a blur of motion as she doled out T-shirts — blue for vets, red for guardians — checked off people's names and answered every manner of question.

Niland said he was grateful that the group made it so easy for him to make the trip, especially since his back had been acting up all week. He, like many veterans of the Korean War, felt that people didn't appreciate his service when he came back to the states. That makes this trip even more special, he said.

"No matter how much pain, I'm going," he said, noting that he had visited a doctor on Friday. "He gave me a shot."

Each vet was provided a wheelchair, whether they could walk or not. It just makes the trip move along more smoothly. Niland traded in his blue and silver cane and sat down in one. O'Connor walked behind and navigated him through security to the gate toward Southwest flight 2929.

By the time they sat down outside the gate to the plane, they were fast friends. O'Connor told him she could barely sleep the night before, she was so excited. Then she told him about her four dogs and cat.

Niland said he had a black lab named Robin and 36-foot fishing boat. Both agreed that anytime they're on the water it feels like a vacation.

Then Niland pulled his sunglasses down over his eyes and stepped into the wheelchair. O'Connor slung her brown purse over her shoulder and slowly pushed him through Gate 7A.

Above the threshold of the gate, there was a red, white and blue banner. It said, "United We Stand."