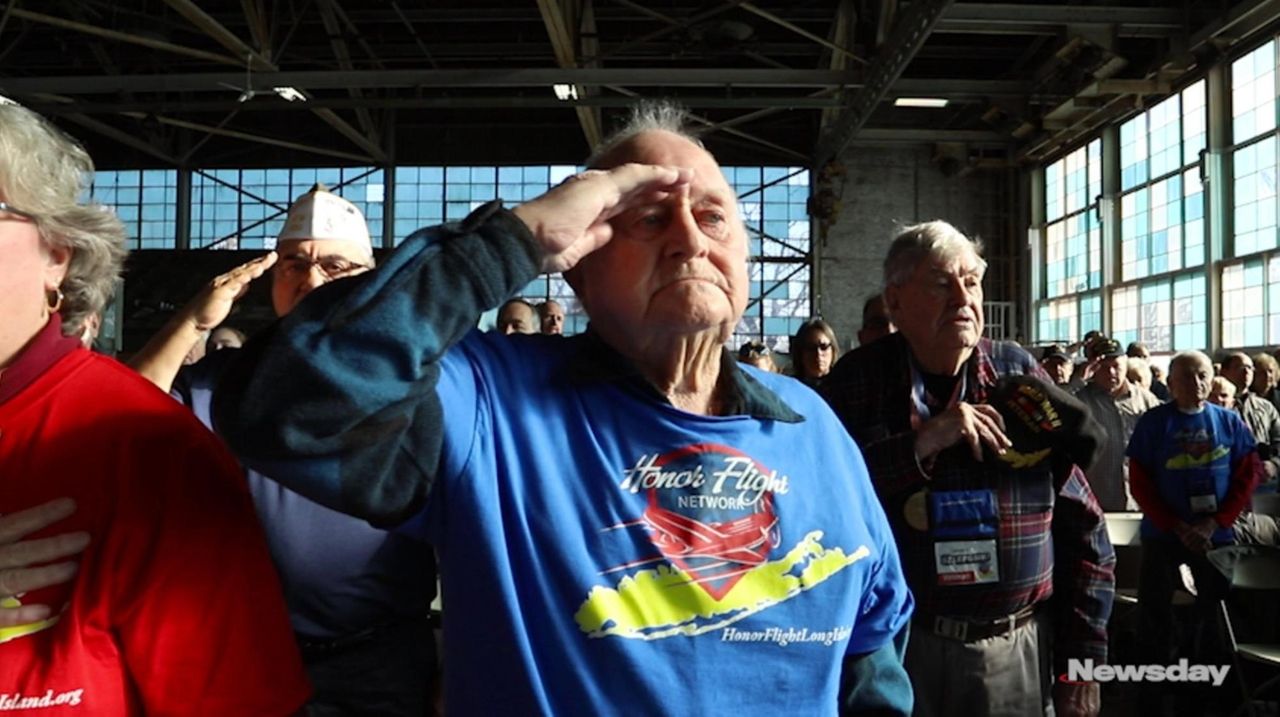 Twice a year, Honor Flight Long Island offers free day trips for veterans to visit the war memorials in the capital. They're joined by volunteer "guardians" who make sure the trip goes smoothly for the vets, many of whom are in their 80s or 90s. On Saturday, Sydney Weihs, 92, of Ridge, joined a reunion of some 50 veterans who made that journey. Credit: Linda Rosier

James and Lauren von Ende always talked about visiting the Vietnam War memorial in Washington, but never got around to it.

In September, though, as James' liver cancer worsened, the Hampton Bays couple jumped at the chance to join a trip to the capital sponsored by Honor Flight Long Island.

James, a Vietnam veteran, died a month later to the day, at age 67.

On Saturday, Lauren von Ende joined a reunion of some 50 veterans who made that journey, where she received a photo booklet of the trip and a lot of comforting.

"For both of us, it was tremendous," she said of the trip. "I wanted to do something for him. I knew he didn't have a lot more time."

Twice a year, the Long Island group offers free day trips for veterans to visit the war memorials in the capital. They're joined by volunteer "guardians" who make sure the trip goes smoothly for the vets, many of whom are in their 80s or 90s. Lauren had gone as James' guardian.

Saturday's event took place in an old plane hangar of the American Airpower Museum in Farmingdale. It was billed as a reunion but it was really just an excuse to hand out the photo books and squeeze out one more chance to honor the vets' service to our country.

Jeff Rosenking, who works with the group, talked about the reason for holding a reunion after only a few months.

"Time is not on their side," he said.

A few hundred people attended the event, held on the grounds of the former aircraft manufacturer Republic Aviation and not far from a military cemetery. Surrounded by planes from the wars of yesteryear, the veterans, many who arrived in wheelchairs or walking with canes, recalled their service days and the trip that brought back so many memories.

For James and Lauren von Ende, the highlight of the trip was visiting the Vietnam Veterans Memorial Wall, a long monolithic structure that holds the names of more than 58,000 of those who didn't make it home or later died of their wounds.

"He had friends on the wall," she said.

During the war, James von Ende was in the Navy stationed in Rhode Island. During a training mission on a ship, he quickly moved his head just in time to avoid a missile that had fallen off a rack. The missile grazed his head, leaving him with a scar on his forehead.

For John Conklin, 86, of East Rockaway, who served during the Korean War, the highlight of the Washington trip came unexpectedly. The group was standing at the Korean War Veterans Memorial when they were approached by a man who said he had been a boy in South Korea during that war. The man recalled the bombings inflicted on his town by the North Koreans.

"He got down on the ground and bowed to us all," recalled Conklin.

Conklin's guardian on the trip was Ken Jackson, the boyfriend of his daughter. Jackson pushed Conklin around in a wheelchair, helping him in and out of the bus, all the time making sure he didn't fall or trip when he got up and walked with a cane.

"It was an honor and a privilege," said Jackson, 55, also of East Rockaway. "It was a tremendous day, to see the outpouring of respect for these veterans. It took your breath away."

Since Honor Flight Long Island started a decade ago, the group has  flown some 1,500 vets to see the memorials to the wars they fought.

Conklin's daughter, Kathleen O'Mara, also went along as a guardian for another vet, Carl Gallub, 91. He lives in assisted living housing in Dix Hills. She talked about the bond they forged.

"We started crying the moment we met, and we cried all day," said O'Mara, 56, of East Rockaway.

Saturday's event ended with the playing of taps.

"I'm honoring him," she said of her husband. "This is all about him."