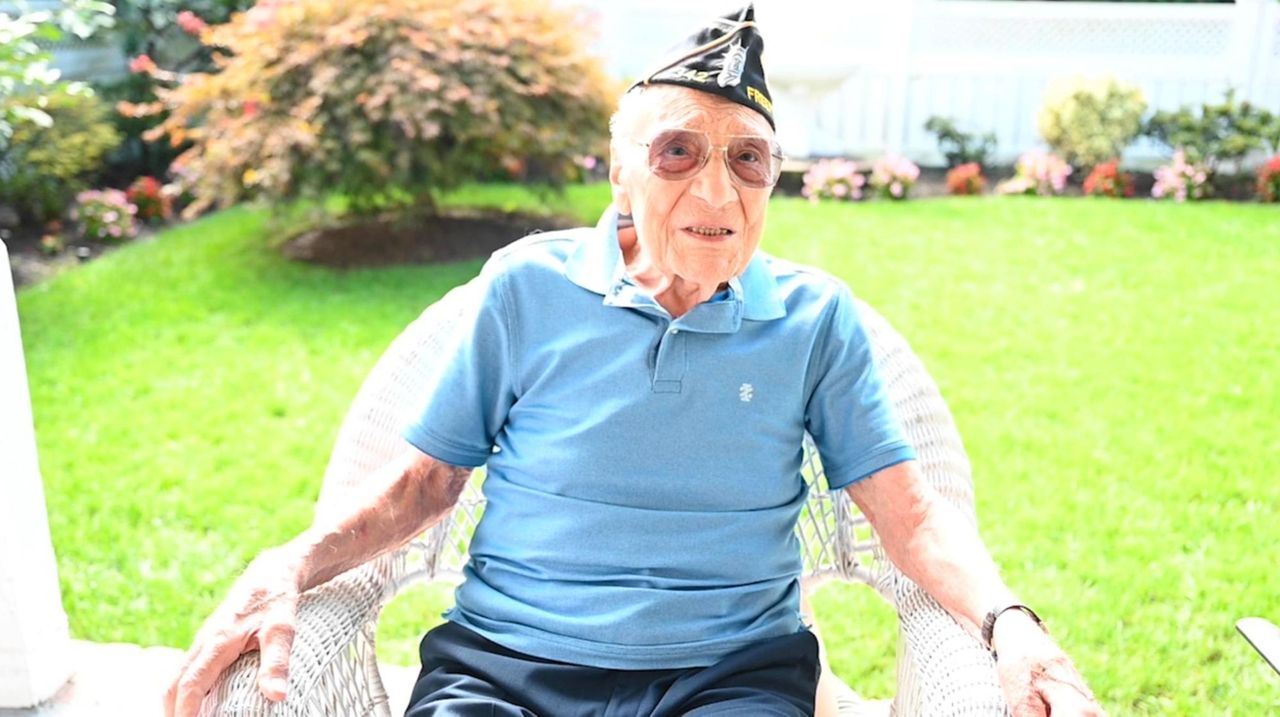 Dominick Critelli is one of nine World War II veterans that will head to Washington on Oct. 3 to visit the Tomb of the Unknown Soldier through Honor Flight Long Island. Credit: Newsday / Alejandra Villa Loarca

With candor, humor, and without sugarcoating, nine World War II veterans recounted a few wartime experiences before their honorary flight next Sunday from Long Island to the nation’s capital.

There were a few mishaps along the way, they recalled; some dangerous, some humorous, which leavens what little they revealed about war’s horrors, including D-Day.

"Chow was good except they didn’t know how to cook it," wrote Dominick Critelli, 100, of Floral Park, of his initial U.S. Army training after he was drafted.

Becoming an airplane-engine mechanic and a Tec 3 sergeant required backbone. "I was scared and depressed in those early days. The future was unknown and scary, and I knew I’d miss my family tremendously."

Words like bravery and gallantry don’t appear in these veterans’ short written accounts, which flight organizers provided to Newsday: Some of the most consequential events are described in the simplest of ways.

Critelli simply notes that one of his letters of commendation was for the Battle of the Bulge. After landing in a pasture to evade German fighter planes, he writes not of the attacks, but of cleaning cow dung off their own plane. Remembering crossing the Rhine, he salutes the Salvation Army for handing out hot coffee and doughnuts. "It was the best cup of coffee I ever had in the Army."

After learning how to identify and shoot down German planes and rockets, Vincent J. Tolve, 98, of Mastic Beach, an Army Air Corps corporal and squad leader, says with great economy: "I was then placed on a ship — and went into Normandy — we landed in the water and the Rangers cleared the way up the cliff and overtook the German’s huge cannons."

This D-Day survivor succinctly sums up his unit’s role: "Then under General Patton we moved through France, crossed over the Rhine River into German(y) where the Germans ‘bombed the hell out of us.’ "

Awarded a Bronze Star and a Purple Heart for what he calls a "small wound," Tolve, making no mention of any other injuries or fatalities, says only: "My squad became like a family." The Air Corps became the Air Force in 1947.

Like good shepherds for all whose futures they made possible, the veterans, including Eleanor Rizzuto, of Franklin Square, a U.S. Army nurse who turned 100 on Sept. 28, offer plain, hard truths, without embellishment: "It was sad," she said. "Life is tough; we had injured all the time."

She served one year in North Africa and another with front-line troops advancing from Naples to Trieste in Italy. "We were gung-ho and anxious; it was a rough deal; I can’t go into the details; I don’t even like to remember them."

Now, a whirlwind trip to D.C.

Rizzuto is the sole woman of the nine veterans who next Sunday will fly on Southwest Airlines out of Islip, see the World War II Memorial, the "Changing of the Guard" ceremony at Arlington National Cemetery, and the Iwo Jima memorial, and be welcomed back upon their return by The Long Island Bagpipe Band.

The Honor Flight Network, an Arlington, Virginia-based nonprofit formed in 2005, says it has arranged these trips for more than 240,000 veterans — including those from more recent wars or who were stricken with terminal ailments.

"I feel there are so many people who deserve the honor," Rizzuto said.

Bill Jones, Honor Flight Long Island’s president, likened the tours to giving the veterans a "big hug." But the trips were suspended after COVID-19 struck, from March 2020 to Aug. 15 of this year.

Also up for the tour are Vincent DePalo, 98, of Bethpage, an Army Air Corps sergeant and flight engineer for the B-17 and the B-24 aircraft, who served in Europe, the Middle East and Africa; and Louis Peretz, 100, of Commack, an Army Air Corps sergeant and parts manager for B-25s, who fueled planes in India until "I got to see my beautiful wife Helen and my parents again!"

A few statistics reveal how fortunate these nine veterans were. A total of 416,800 U.S. military personnel were killed in World War II. Out of very 1,000 service members, 8.6 died in action, three from natural causes, and 17.7 were wounded in combat, the New Orleans-based The National WWII Museum says.

Eugene Zanger, 93, of Massapequa, who enlisted in the Army "to fight the Germans" but instead was sent to Korea, is one of the many left with permanent injuries for which he was only partly compensated.

A corporal and company clerk for the road-building 42nd Engineers Construction Battalion, he broke up rocks with a jackhammer for six months — with few if any safeguards. "I was quite disabled when I left the service. I had been poisoned, was deaf and I couldn’t walk on my right foot," he said.

Robert Leslie Harms, 95, of Carle Place, a Navy first class seaman, who says he still remembers Morse code, went through radio, gunnery and aviation training, which had its dangers.

"During training, we lost a few men because we were using old planes," he recalled.

Sent to Pearl Harbor after the war ended, one of his roles was coxswain on a 50-foot boat ferrying passengers between Honolulu and the naval station; once, running out gas, he had to dive into the oily harbor and swim ashore. "The next day, I noticed there were sharks in the water."

Constantine "Gus" Efthimiades, 95, of Whitestone, an Army corporal, fought his way through France, Belgium and Germany. "We shot the mortars many times," he writes, describing being frightened at first while standing guard on the edge of a German forest.

His deployment to Japan was canceled after that country surrendered.

While studying airplane maintenance in England, his logic, not the military’s, saved him from his professor’s false claim of cheating.

"I said to him, ‘I’m the only person who got 100, so who did I cheat off of?’ He withdrew his accusation and I got a certificate for finishing the course," Efthimiades wrote.

Drafted at 18, Stephen J. Samsel, 94, of Fairfield, Connecticut, chose the Navy, he said, as he "grew up along the Long Island Sound."

On the train to San Diego, "we could only sit upright across the entire country." He recalls strangers giving out water at stops. "My first drink was in Mystic, Iowa — so grateful."

A motor machinist’s mate, he served in the Pacific — where the USS Indianapolis, just 20 miles or so ahead of one of his ships, was sunk on July 30, 1945. That disaster, with nearly 900 sailors killed, was only a few days after the ship had delivered key atomic bomb parts to Tinian Island, about 1,500 miles southeast of Japan, where the Hiroshima and Nagasaki attacks originated.

Writes Samsel: "We heard from the radio broadcast when they dropped the atomic bombs on Japan and very shortly after we heard of Japan’s surrender. It was [like] the Fourth of July with all the ships shooting off flares in celebration."

CORRECTION: Eleanor Rizzuto's last name was misspelled in earlier versions of this story.