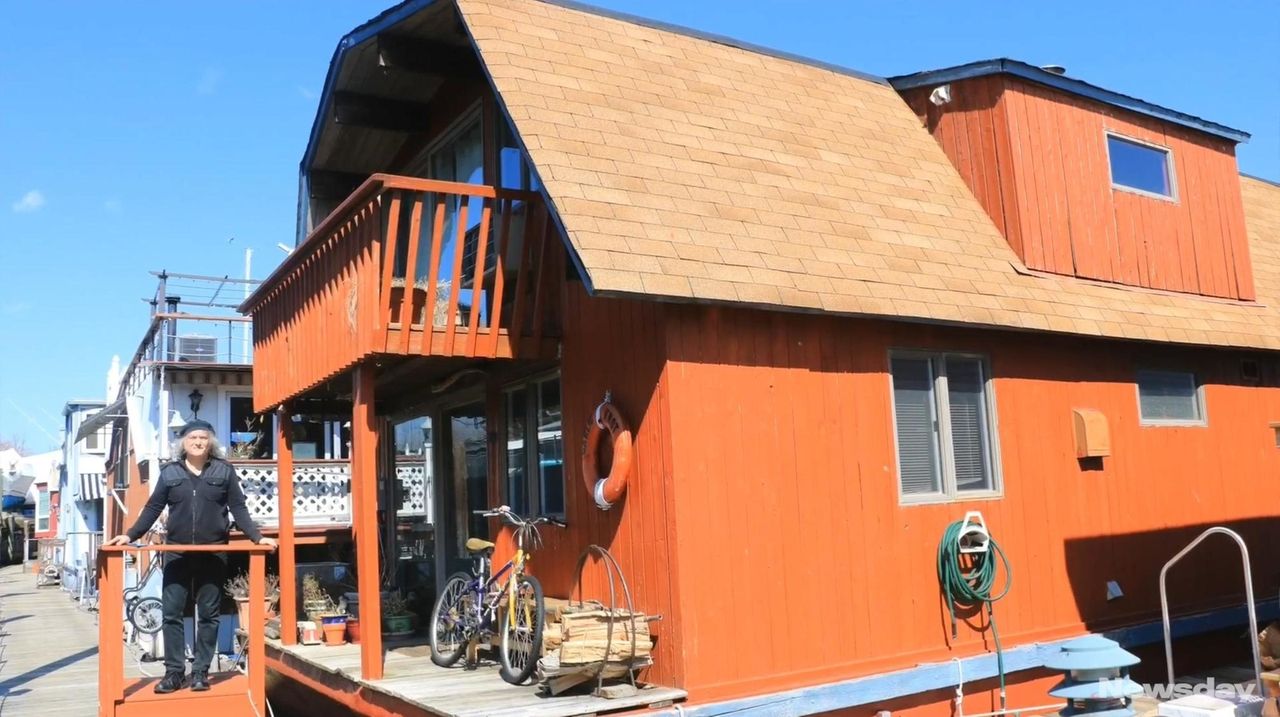 Sal Cataldi gives a tour of his two-story, 1400-square-foot house barge, which is docked in Port Washington and features two bedrooms, a music studio and fireplace. Credit: Newsday / Kimberly Yuen

A waterfront house with no mortgage and no property taxes on Long Island. That almost sounds too good to be true, but Sal Cataldi is proof that it’s possible.

Cataldi lives on a house barge at Toms Point Marina in Port Washington. The marina is also home to seven other floating homes.

A barge is like a houseboat, but without a built-in motor.

“Instead of the foundation being in the ground, it's in a hull,” said Cataldi, a 14-year-resident of the marina.

His 20-foot-by-40-foot floating home is two stories tall with two bedrooms, one and a half bathrooms and a smaller room that serves as his music studio and laundry room. It’s about 1,400 square feet and comes with a fireplace and central air-conditioning.

“It’s compact, but it’s not ridiculous,” he said.

Cataldi, 61, currently lives there with his girlfriend. He works in public relations and is a musician on the side, performing under the name Spaghetti Eastern Music. He records his music on the barge.

His two children, now both in their early 20s, grew up on the barge and at their mother’s house a mile away.

“My daughter had a lot of playdates here because it was just so unique,” he said.

Cataldi, a Flushing native, originally moved to a house in Port Washington in 1996 with his then-wife and their two children for the school system.

After he and his wife divorced, he wanted to stay close to his kids so he rented an apartment nearby.

One day, Cataldi says he was thumbing through a newspaper and came across an ad for the barge. He didn’t even know barges existed on LI but his immediate reaction was he thought it looked “really cool.”

He did have second thoughts, because the seller was asking for cash and Cataldi worried that the “house could sink.” So Cataldi stayed in his rental apartment for another year.

But when his lease was ending, he visited the marina again. The barge he’d been eyeing was still there -- and the price had been cut by 40 percent.

"‘Why the hell not?’ It’ll definitely be different.” Cataldi said he thought “it would be a great place for kids to grow up half the time.”

Cataldi said his house was built in 1983 by a now-defunct company called Sundance Floating Homes, which was based in Patchogue. Previous owners had the barge towed to Manhattan at the 79th Street Boat Basin and to Chelsea Piers before it wound up at its present home in Port Washington.

He said one of the previous owners would rotate the house for various views of Manhattan. “The best thing is really the view. It's like a freaking million-dollar view,” he said.

His current view consists of a panorama of the boats docked at Manhasset Bay, frequented with ospreys diving for fish and occasional visits from his unofficial pets: the swans, geese and ducks.

Cataldi says he doesn’t pay property taxes, and since he paid for the barge in cash, he doesn’t have a mortgage.

He also pays about $2,000 in school taxes a year. “I put two kids through school here. I don't have an issue with school tax,” Cataldi said.

His downsized lifestyle allowed him to buy a second home in Woodstock, where he spends about every other weekend.

“I kind of wanted to have something in the woods to contrast this,” he said of his waterfront view.

The initial plan was to just live on the barge until his kids graduated from college, he said. But now that his youngest has just graduated, “I have no intention of leaving.”

“Where are you going to go to get a lifestyle like this? It’s crazy. It's great,” he said.

During severe weather, the marina doesn’t allow residents to stay on their boats, so he’ll usually go to a friend’s place nearby.

“We don't have any issues really with flooding because [the water] is not going to come in the hull. We're just going to rise with the tide,” Cataldi said.

The marina staff takes care of shoveling snow off the docks and if the water freezes over, they’ll go around to break up the ice.

“It’s a fantastically-run marina,” he said.

He describes his neighbors as a “very tight-knit community” who are always looking out for one anothers’ houses.

Cataldi did not have any boating experience prior to living on the barge, but didn’t think that was an issue. “It’s just like a house.”

The only additional maintenance is to paint it every two or three years because of its constant exposure to the elements.

Even though he lives at the “mercy of the elements,” he has no regrets of his decision to live on the barge.

“If a hurricane comes through here and trashes this thing. Well, I lived here 14 years. I had a great time. It was worth it.”

Editor’s Note: We’re looking for Long Islanders who have adopted unique housing or lifestyle situations to deal with LI’s cost of living. If you or someone you know have a story to tell, email kimberly.yuen@newsday.com.

Where have all the houseboats gone?

Houseboat communities on Long Island were more common in the 1980s, but the numbers have since been dwindling due to stricter government regulations and waterfront development.

Tom's Point Marina said Cataldi's barge and the seven other floating homes on site are "grandfathered in" as legal houseboats. The marina is not accepting any new houseboats at this time due to a lack of space, according to staff.

Next door at Manhasset Bay Marina, seven houseboats reside there and they are also not accepting any new ones, staff said.

For those interested in trying out the houseboat life or just looking for a unique staycation on the water, there are some available on the Island to rent per night on AirBnb, one in Port Washington and another in Riverhead.

Why this LI man decided to leave and live out of a vanFarmingdale native Joseph Ephraim became a "van nomad," traveling from state to state while living out of a converted Ford E350 cargo van. LIers convert old school buses into tiny homesIt used to be a 66-passenger school bus, but in a few months, it will ... Take a look inside this LI man's beach-themed converted school busAmityville native Bill Skinner converted a 2002 International school bus into a tiny home, which ...