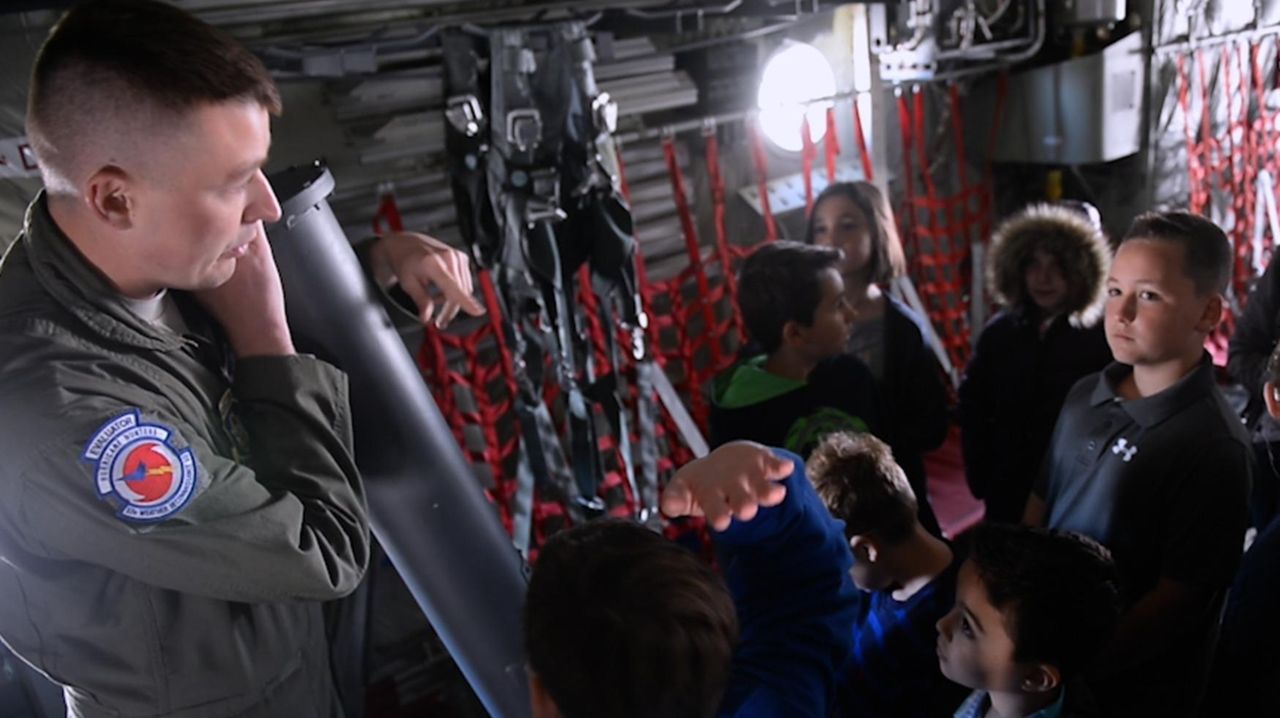 On Monday, May 8, 2017, East Moriches Elementary School students who performed well in the school's Science Fair and the Science Club visited Long Island MacArthur Airport in Ronkonkoma. As part of the field trip, which took place during Hurricane Preparedness Week, the kids saw two hurricane hunter aircraft that fly into storms, and learned about how to prepare for extreme weather and help out during hurricane season. Credit: Steve Pfost

Some Long Island parents should expect to get an earful from their children this week on the finer points of hurricane hunting and storm surge.

That’s as Connetquot Central School District, East Moriches Union Free School District and Levittown Public Schools sent busloads of students to Long Island MacArthur Airport on Monday to get the scoop on hurricane preparedness, as well as meet the teams who gather data by flying right into or around the storms.

As part of the National Oceanic Atmospheric Administration’s Hurricane Awareness Week, hurricane hunter airplanes and crews are stopping at locations along the East Coast this week, treating students and members of the public to tours and information sessions. Tuesday’s stop was in Washington, D.C., and Wednesday it’s Raleigh, North Carolina.

Perhaps the combined thrill and danger of the storms was best expressed by Matthew Kwok, 10, a fifth-grader at East Moriches Middle School.

“I really like hurricanes because they’re really cool to learn about, but not to be in,” Matthew said during his visit to MacArthur on Monday.

That was after a slide presentation, a chat with the crew of NOAA’s Gulfstream IV aircraft, which flies around and ahead of tropical systems, and a tour of the U. S. Air Force Reserve WC-130J Hurricane Hunter. That’s the plane that travels right into the storm’s core, gathering data for use in computer forecasting models.

Among the “wow” moments for a sampling of the 27 East Moriches elementary and middle school students:

A major message of the day was how to prepare and stay safe, with the hurricane center appreciating the value of students going home and sharing their enthusiasm and what they learned with parents.

Peyton Worby, 11, a fifth-grader, said one of her take-aways was to pay attention to any evacuation orders, so as not to risk the lives of people who otherwise would have to try to rescue you. Also, “flooding and the high winds of a hurricane can, like, destroy your house, or the flooding can go into your house, and then it might go higher than how tall you are.”

As for supplies to have on hand, “I would like to have a flashlight, some batteries, a water bottle and maybe some snacks, like chips,” said Antonella Russo, 10, a fourth-grader. “And maybe a cellphone that’s fully charged.”

Make that “extra cash and a radio” for Ben Magee, 9, a third-grader.

Still, the group, all of whom belong to a science club or who had participated in a science fair, wanted to learn more, with lingering questions such as:

*How long can a hurricane last?

*How many people can safely ride on the Air Force’s hurricane hunter plane?

*How does a hurricane affect the ocean’s tides and currents?

*Why do hurricanes have people’s names?

Of the students, Schneyer said, “you could . . . tell their brains were just spinning the entire time.”