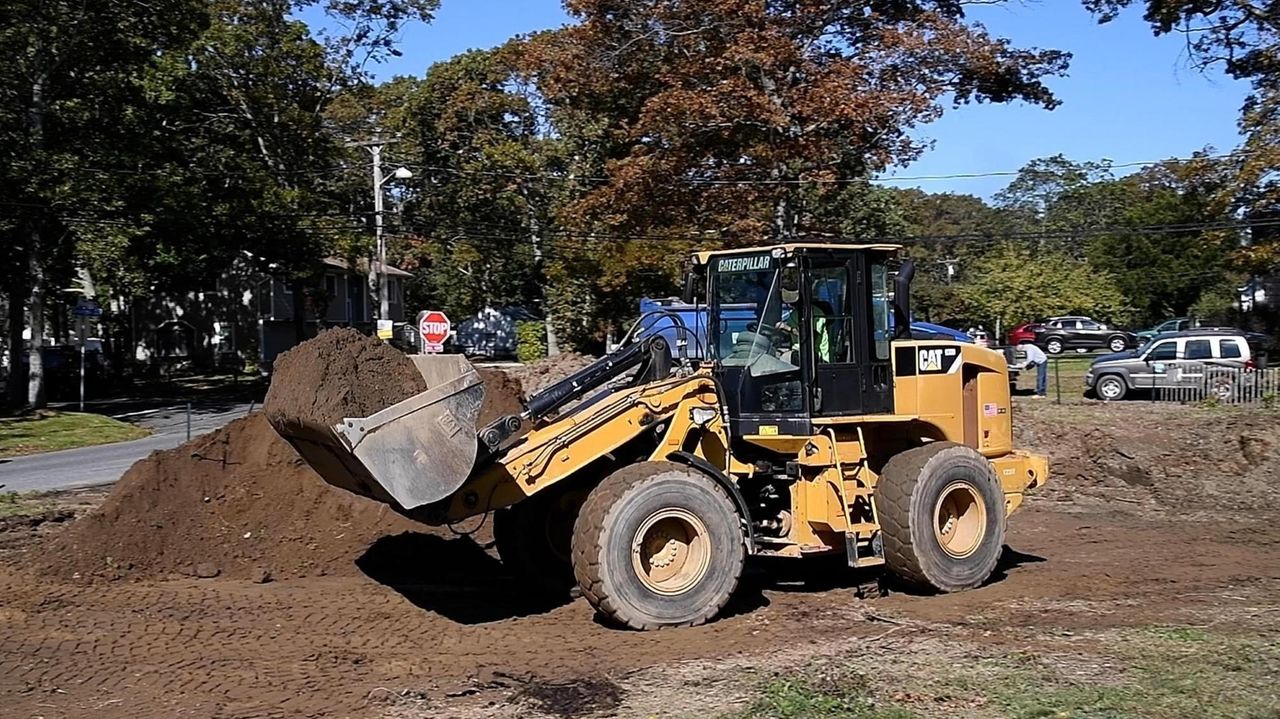 Illegally dumped material, such as mounds of dirt, filled with large chunks of metal and other contaminants, that were discovered during "Operation Pay Dirt" began to be removed Wednesday from John Kerrigan's half-acre property on Wilson Boulevard in Central Islip. Newsday's Steve Langford has the story. Credit: Newsday / J. Conrad Williams Jr.; File footage

Mounds of dirt, filled with large chunks of metal and other contaminants, rumbled Wednesday as they were scooped by a payloader on John Kerrigan's half-acre property on Wilson Boulevard in Central Islip.

The retired Kennedy Airport worker has waited 2 1/2 years for his home — one of two dozen properties across Long Island that were victimized in "Operation Pay Dirt," the state's largest-ever illegal dumping scheme — to be cleaned up and the toxic fill removed.

"It's a big relief," Kerrigan said on Wednesday before a news conference with prosecutors and elected officials announcing the start of the environmental remediation process. "We've been through three springs and three summers and it will finally be gone."

Anthony "Rock" Grazio of Smithtown had advertised to Kerrigan that he could dispose of free clean fill on his property to be used for landscaping, Suffolk District Attorney Timothy Sini said at a news conference Wednesday.

That dirt, Sini said, was contaminated with solid waste, while tests showed the presence of mercury and traces of other hazardous substances. Over the next few days, crews will remove 500 cubic yards of material from Kerrigan's property, officials said.

Grazio, who prosecutors described as a "dirt broker" and the "ringleader" of the scheme, pleaded guilty to two counts of second-degree mischief, two counts of endangering public health and other charges and was sentenced to 2 to 4 years in prison. He was also ordered to pay $500,000 in restitution to his victims.

Prosecutors brought a civil lawsuit against 12 defendants and 10 corporate entities, leading to the forfeiture of $1.27 million in assets — including proceeds from the crimes and the auctioning of trucks and other equipment — that will be used to fund the cleanup, Sini said.

"Environmental dumping is a crime driven by greed," Sini said. "And we want this case to send a clear message to anyone considering committing these crimes on Long Island that it does not pay in the long run."

Suffolk County Executive Steve Bellone said Kerrigan's life was "turned upside down" by the illegal dumping and his health and safety were put at risk, all for profit.

"This is not a victimless crime," Bellone said. "Illegal dumping affects us all. These environment crimes are devastating to us all."

The asset forfeiture funds will be used to remove contaminated fill from 18 homes at a cost of about $850,000, Sini said. The work is expected to be completed by year's end.

Three more dumping sites were remediated privately. One was a solid waste management facility that accepted payment for the fill and will be forced to pay for the cleanup, while investigators prevented the illegal dumping at two other sites before the fill could be placed, officials said.

The cleanup, Sini said, will be performed by a private contractor and overseen by the Suffolk Department of Public Works and the state DEC.

Carrie Meek Gallagher, the Long Island regional director for the DEC, said her staff will ensure the cleanup "meets all of the state's stringent standards and that they are fully protective of public health and the environment."

Following the remediation, a second contractor will conduct "end point sampling" at each property to certify that all hazardous substances have been removed, Sini said.

In July 2018, Sini empaneled a special grand jury to study the issue of illegal dumping. Its subsequent report found there were no laws specifically to target the illegal acceptance, disposal or possession of construction and demolition material, hazardous substances and acutely hazardous substances.

Earlier this year, state lawmakers passed bills that designate as felonies illegally dumping construction debris or participating in a dumping scheme. In the past, those caught dumping materials often were charged with a low-level offense, such as criminal mischief, and assessed a relatively small fine.

Operation Pay Dirt by the Numbers

* All 40 defendants have pleaded guilty, including the ringleader, Anthony "Rock" Grazio," who was sentenced to 2 to 4 years in prison.

* Prosecutors brought a civil lawsuit against 12 defendants and 10 corporate entities, leading to the forfeiture of $1.27 million in assets

Lawmakers reach deal on law to prosecute illegal dumpingThe legislation was prompted by the disposal of contaminated material at a Brentwood park in 2014. Sini: Illegal dumping is an 'epidemic' in SuffolkThe district attorney said that a growing number of contractors are dumping hazardous waste from New York City demolition projects in Suffolk County.