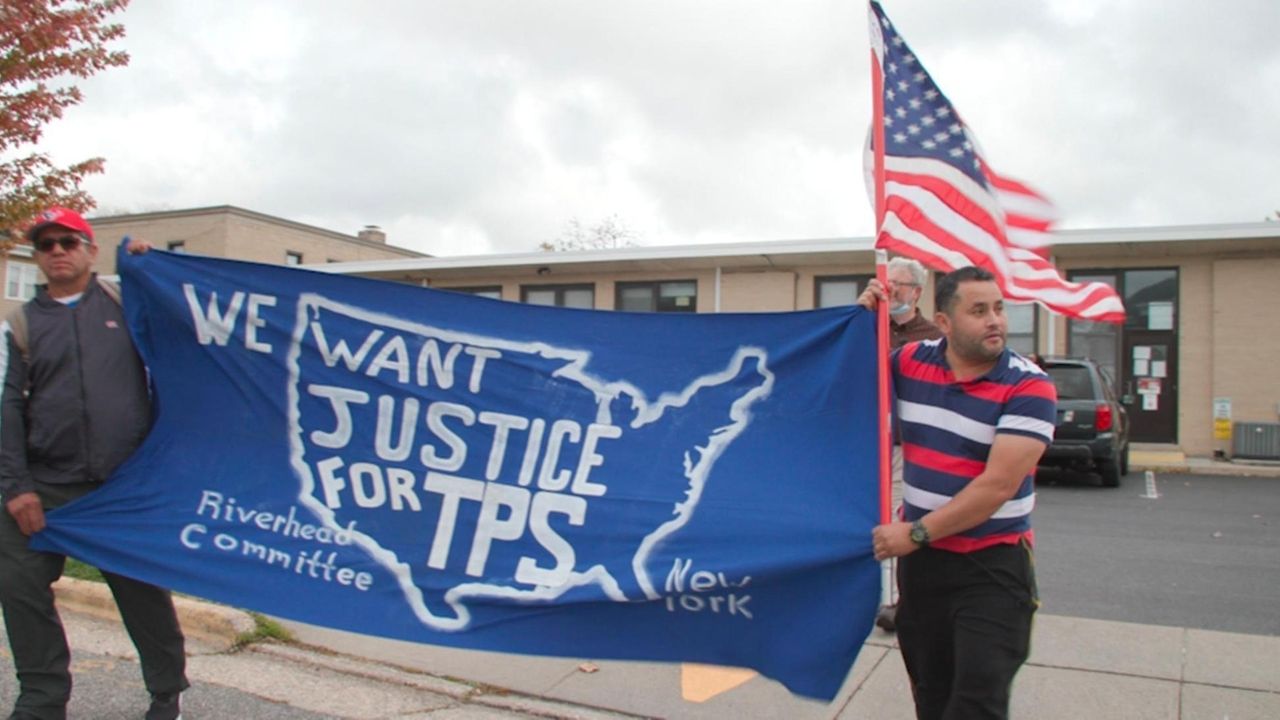 Nearly 200 people marched in downtown Riverhead on Saturday calling for Congress to pass meaningful immigration reforms for thousands of immigrants on Long Island and millions more nationwide who entered the country without legal permission.

With signs reading slogans like "No hate, no fear, immigrants are welcome here" and "Essential, not deportable," a diverse crowd comprised of Hispanic, white and African-American marchers, along with State Assemb. Fred Thiele Jr. (I-Sag Harbor), stood along the Peconic riverfront during the East End March and Rally for a Pathway to Citizenship. Some shared stories of their personal hardships while waiting to become U.S. citizens, as marchers called on Democrats on Capitol Hill to create a pathway to citizenship for immigrants living here without legal permission.

Jade Stoute, 22, of Coram, emigrated from Trinidad more than 20 years ago with her mother and is a recipient of DACA — the Deferred Action for Childhood Arrivals program, which offers protection from deportation for children whose parents brought them to the United States.

Stoute told Newsday her road to becoming a U.S. citizen "was not easy," having lost her job working security for Southampton Town earlier this year due to her DACA status renewal being delayed. Stoute received her green card in May through the Special Immigrant Juvenile Status program.

"I’m glad I got my green card, but I know there’s so many people who have shared their stories about them not knowing whether everything is going to stop," Stoute said. "So I really hope a pathway towards citizenship works out, and I think it will, because if we continue doing this, I don’t think that they can just ignore it."

Jhonatan Zelaya, 26, of Coram, is the son of El Salvadoran immigrants and is also a DACA recipient, having enrolled in the program in 2012 before he got married in 2017 and received his green card at a later date. Zelaya told Newsday he went through a lot of uncertainty in the years before receiving his green card because of fear of what would happen if or when his DACA status would expire.

Several advocates who spoke from groups such as the New York Immigration Coalition, the North Fork Spanish Apostolate in Riverhead and OLA of Eastern Long Island, which advocates for Latino immigrants, called on U.S. Senate Majority Leader Chuck Schumer (D-N.Y.) to deliver on a pathway to citizenship, noting he had promised such change when Democrats won the House and Senate in the last election.

Angelo Roefaro, a representative from Schumer’s office issued a statement on the rally on Saturday.

"Senate Democrats are not giving up the fight," Roefaro said. "They still have a menu of options, are working with the advocacy community, and will continue fighting to get immigration reform done."

For Zelaya, he wants lawmakers on Capitol Hill to act soon.

"I feel like it comes down to priority. And if they don’t pass it, then it’s not a priority to them," Zelaya said. "And then that’s where we as a community have to start looking at other ways and other resources to vote people in that are actually going to do what they said they’re going to do."