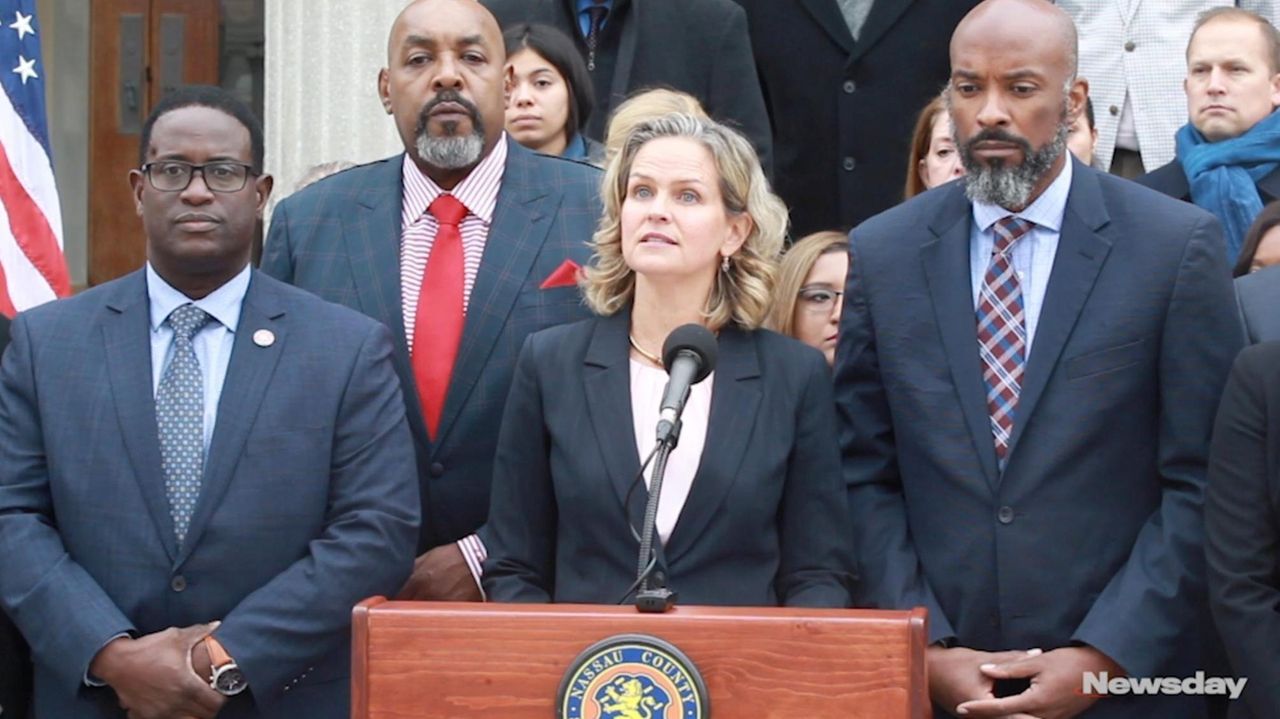 Nassau County Executive Laura Curran announced on Friday what she called a “historic” and sustained, multipronged action plan with broad bipartisan support to root out “unacceptable” housing discrimination in the county.

The effort will include enforcement, education and community engagement efforts, she said, and was spurred by Newsday's findings of evidence of unequal treatment of minority homebuyers by some real estate agents on Long Island.

Curran — standing on the steps of the Theodore Roosevelt Executive and Legislative Building in Mineola and flanked by county legislators, fair housing advocates and others — promised the initiatives were the beginning of a sustained effort.

She said Newsday's three-year investigation, "Long Island Divided," revealed an “inexcusable reality that offends our most cherished values as Americans: that all of us are created equal and all of us deserve an equal shot."

"It is important for us to acknowledge that the practices revealed — racial steering and other discriminatory practices — are not a new phenomenon. It’s been our reality here for decades on Long Island," she said. "We know that racial discrimination in housing and the segregation that it has perpetuated has a long and deep history on Long Island. We must be honest in order to confront it and in order to be clear about what we must do to solve it.”

Among the tactics Curran announced:

A Curran spokeswoman later said the cost of the initiatives was still being worked out but could range from $200,000 to $300,000 to start.

Curran’s action plan was developed this week after consultations with a variety of stakeholders in an effort to be comprehensive. It is the newest in a flurry of announcements by other governmental agencies to step up enforcement and investigate real estate agents’ actions portrayed in Newsday’s series.

And Suffolk County Executive Steve Bellone on Tuesday announced a four-point, $200,000 plan in which the county would hire an outside agency to test for housing discrimination, strengthen the county Human Rights Commission and work to raise public awareness about fair housing laws.

Several legislators at the Friday news conference gave full-throated support for the Nassau initiatives, saying that endemic housing discrimination cannot continue unchallenged and that the county needed to step up actions against it.

“I have to say when I saw the Newsday story, in terms of the divide, in terms of segregation on Long Island, I wasn’t surprised,” said Legislative Minority Leader Kevan Abrahams (D-Freeport). “Being a minority legislator, representing a community, predominantly minorities, I’ve heard that anecdote for many, many years.

"However, the Newsday investigation validated many of the concerns that I’ve heard since being in office. This type of action demonstrated by real estate agents cannot continue in Nassau County.”

Legis. Steven Rhoads (R-Bellmore), one of the Republican lawmakers who make up the legislature’s majority caucus, said what Newsday’s investigation revealed was “shocking to our conscience” and a reminder that racism and discrimination still exists, “in different forms than it did 50 to 60 years ago.” He added, “We can no longer allow ourselves to be blind to the reality that it exists.”

Rhoads, who chairs the legislature’s minority affairs committee, continued: “As a government, we can no longer sit back and watch. And I think what you’re seeing today is the framework of how the county can best and more effectively begin to challenge the problem that we all acknowledge exists.”

Some legislators and community activists also recalled their personal experiences of racial or religious discrimination.

Legis. Arnold Drucker (D-Plainview) said he was a lifelong resident of Nassau County. “We all like to think of ourselves as enlightened people, understanding of the problems of our nation and the problems in our community," he said. "We like to think we’re more tolerant and capable of reaching out to people and not being subjected to different types of racism and discrimination.

"You know what? That was all a fiction. And it’s been a fiction, because I’ve known from Day One, since I was a little kid, there were certain neighborhoods that we weren’t allowed to buy houses in as a Jewish person. … Long Island is one of the most segregated communities in the country.”

Drucker continued, “Now Newsday has exposed this dark secret, which really wasn’t a secret after all.” He said it was “our obligation, as a government,” to tackle the problem of “institutional racism” on the Island.

Newsday’s investigation made use of undercover paired testing, in which equally qualified testers of different races meet with real estate agents to see if there is any disparate treatment.

Newsday found that in 40% of the 86 tests done, the two fair housing experts Newsday consulted independently agreed that evidence suggested that brokers subjected minority testers to disparate treatment: for black testers, it was 49% of the time; for Hispanics, 39% of the time; and for Asians, 19%.

Among the more dramatic recollections of personal experience came from Pilar Moya, executive director of Housing Help Inc., a nonprofit based in Greenlawn that helps low- and moderate-income people access safe and affordable housing.

Moya told those assembled that she was six months pregnant when she and her husband moved to a “white neighborhood” in the Town of Huntington 22 years ago and soon faced threats.

“Right after I moved, I received my first hate letter stating that because of the color of my skin, my husband and I, we did not belong,” Moya said.

A second letter threatened to burn down their house if they didn’t move, she said, and a third threatened bodily harm. Moya said she ignored the letters, though her fear escalated. Her family remains in the community, which she did not want to name publicly.

She applauded the county’s plan to institute a public awareness campaign and educational workshops. “We as minorities are not always aware of what’s available and what our rights are,” she said.