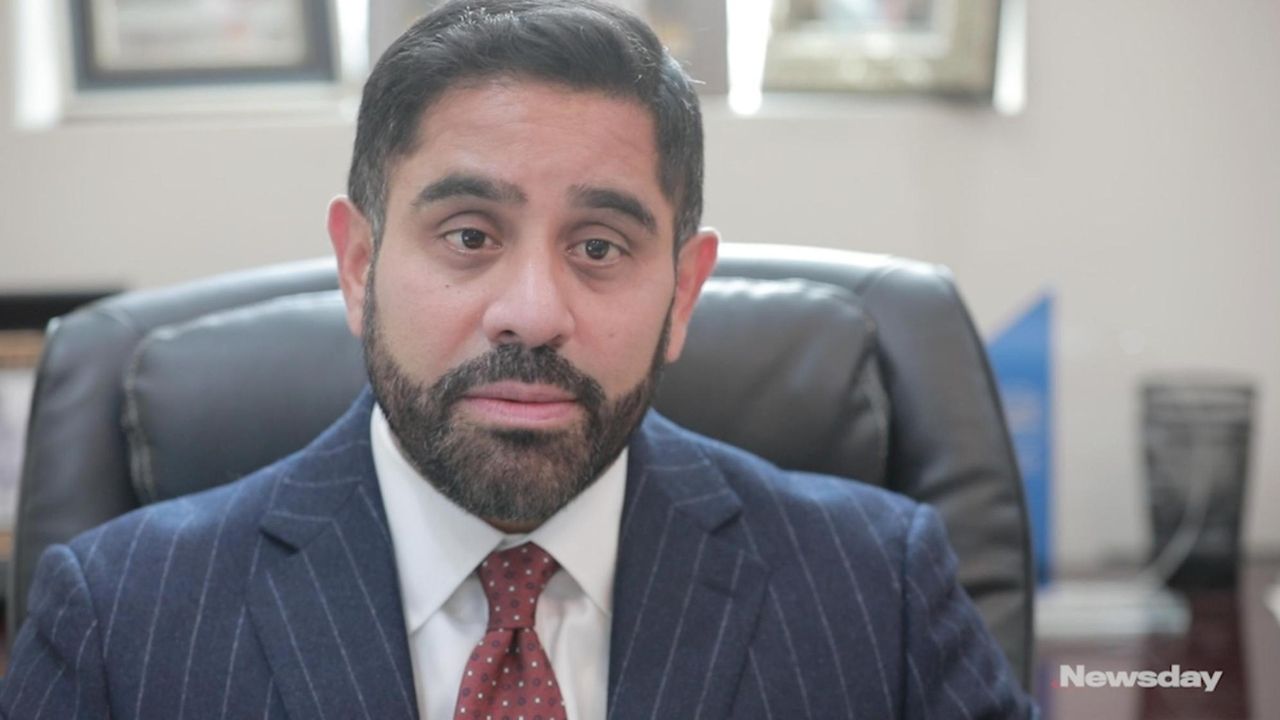 Xavier Palacios, an attorney and member of Huntington's Hispanic Task Force, reacted to Newsday's, three-year investigation of residential sales practices and how it relates to the town’s increasing Hispanic population and real estate agents' role in that growth.  Credit: Newsday / Yeong-Ung Yang

In Huntington, where the population is diversifying, there was pride and dismay last week among local officials and civic leaders.

The pride came from the multiculturalism that's enhancing life in the town. The dismay came because of evidence in Newsday’s “Long Island Divided” investigation suggesting real estate agents had steered Hispanic buyers into the area compared with matched white buyers.

Elected leaders in the town suggested remedies ranging from more fair housing education for real estate agents to fines and license revocations if state officials investigated and determined violations were taking place. Community activists and leaders decried any steering or housing bias, although not all were surprised by evidence of unequal treatment.

Town Supervisor Chad Lupinacci said he found the descriptions of potential steering disheartening. “We pride ourselves on how our differences add to the cultural fabric of our town,” he said.

If the state, which licenses agents, were to confirm such findings in an investigation or uncover other troubling trends, he said, then it should mandate corrective actions such as continuing education classes.

"If people looking for houses are not shown all the houses that are available, they miss all the benefits and opportunities in the town such as our programs and school districts," he said.

Statistics show the white population has dropped in many Huntington census tracts, and the Hispanic population has risen. Recent census numbers show that overall, the community is 86% white, 9% Hispanic, 1% black and 3% Asian.

In five tests, white and Hispanic house hunters sought $450,000 to $500,000 houses within 20 or 30 minutes of Greenlawn or Northport, two communities within driving distances from downtown Huntington, or a $600,000 house within 30 minutes of Syosset, an area also encompassing Huntington.

Collectively, the agents gave the testers 453 listings, recommending 65 percent of them to the Hispanic house hunters.

Among those listings, the agents suggested homes in the core Huntington communities of Huntington, Huntington Station and South Huntington 173 times. Here the concentration of houses recommended to Hispanic buyers hit 84 percent — with no agent providing a majority of listings to a white tester.

The gap in the number of home recommendations made to Hispanic and white buyers in three of the tests was large enough that Newsday’s two fair housing consultants detected evidence suggesting that agents had steered Hispanic buyers into the Huntington area compared with matched white buyers.

Veronica Melgar, the former chair of the Town of Huntington Hispanic Task Force, said she believes she and her husband were steered to Huntington Station, although to an area with a high percentage of white residents, when they were house hunting in Huntington in 1995. She said they were never shown homes north of Route 25A. After she admired the Catholic Church in downtown Huntington, she said, a real estate agent told Melgar she would be attending the Catholic church in Huntington Station instead.

"At the time I didn't know Huntington Station was where the Hispanics lived and worshipped," Melgar said.

She said she hopes Newsday's investigation sparks a conversation about steering because the practice leads to segregation.

"It's about time something like this came out because no one wants to talk about steering," she said. "I wish color or race wouldn't be something that would block someone from where they want to live, but it does and this needs to be addressed."

June Margolin, president of Huntington Station based-Huntington Matters, a local civic group, was organizing a party to acknowledge the group's five-year anniversary last week. The organization was founded in 2014 after Maggie Rosales, 18, was killed by her neighbor, a murder that galvanized the Huntington Station community. Margolin decried steering.

“I find the practice disgusting,” Margolin added. “Our strength is our diversity, and there are so many people of all races and religions and backgrounds that want to come to our town because it’s a fantastic place to live. We are truly a melting pot, and the fact that there are agents out there handpicking our neighbors, I’m not OK with that at all.”

Town Board Member Mark Cuthbertson said he’s pleased that the community is perceived as welcoming to Hispanic buyers, but he's unhappy about evidence of steering.

“If agents want to push diverse people here that’s great, but the way they are doing it is a violation of federal law and that’s unconscionable," he said. "The law is designed to stop the perpetuation of segregation, and they’re obviously violating the law.”

He noted the practice negatively impacts white house hunters who are being denied the opportunity to look at homes in Huntington, which offers a wide range of housing choices and amenities.

“Presumably they’re being steered away, which is a terrible thing,” Cuthbertson said.

Town Board Member Joan Cergol said prospective buyers should be given the opportunity to weigh the full range of options based on the criteria they provide without being subject to filters, whether conscious or subconscious.

“The filtering of housing choices is a clear violation of fair housing law that perhaps many believed was a practice of the past,” she said.

She said no one knows what’s in the mind of the real estate agents and that their actions could be human nature.

“The take-away here is a clear need for better and ongoing education of fair housing law in both the professional real estate and housing consumer arenas,” she said.

Town Board Member Ed Smyth said Newsday’s overall findings were appalling and that steering seems to be pervasive, which he found shocking. He called on the New York secretary of state to look into the actions of the real estate agents.

His board colleague Gene Cook called for tough enforcement.

"If real estate agents are steering in one place or another or targeting any group, they should gave their license revoked and pay a penalty," Cook said.

Huntington attorney Xavier Palacios said he was disappointed to read there was evidence of steering in the community.

"For real estate agents to decide what the makeup of Long Island or Huntington is going to look like, that just sounds like economic interference that quite frankly is completely against capitalism," he said. "I hope as in anything else when there are issues there is some sensitivity training where they learn what the implications of what has been happening.

"Sometimes things get done so often and frequently that it becomes second nature, and maybe they just don’t realize what they’re doing," Palacios said.

Susan Lagville, a longtime housing advocate in Huntington, said she was surprised to learn of evidence that real estate agents were steering Hispanic people to neighborhoods north of 25A, which traditionally has been predominantly white.

“I didn’t know that was happening,” Lagville said. “It’s a change for Huntington. Anyone being steered anywhere is not good. People should be able to make their own decision on where they want to live.”