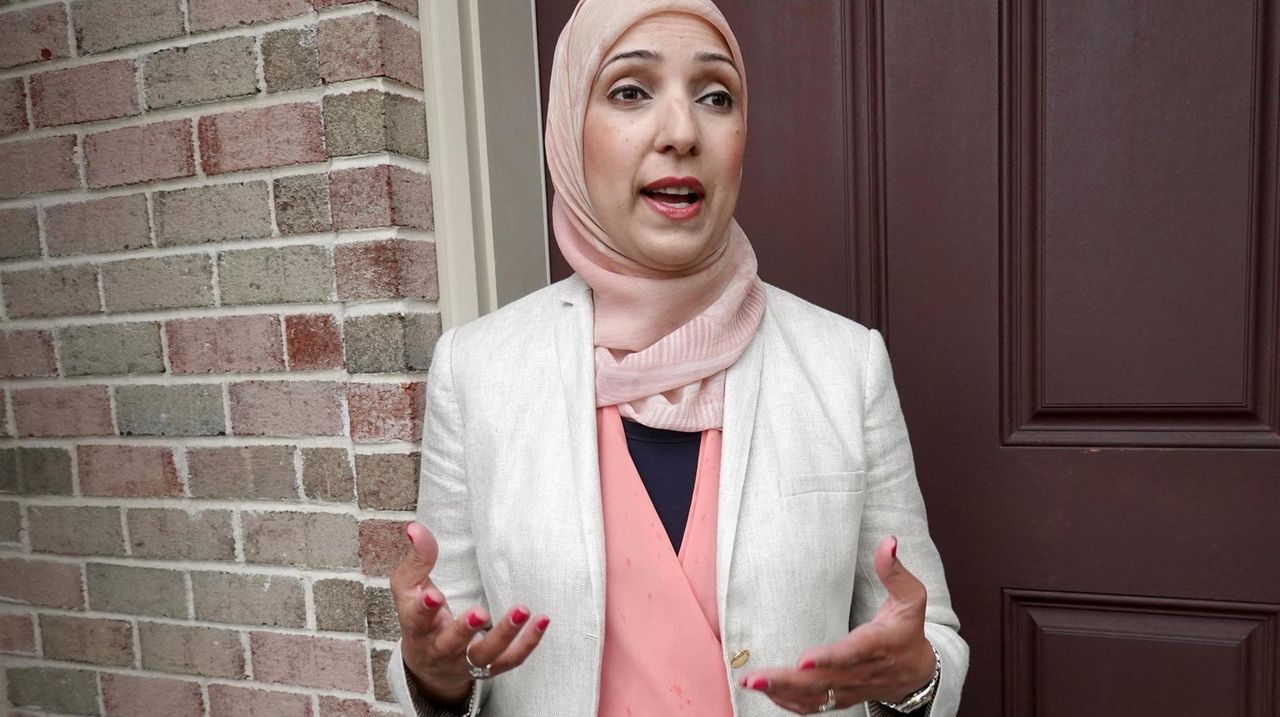 Dr. Uzma Syed, chairwoman of the COVID-19 task force at Good Samaritan Hospital, says vaccines should be available at night during the month of Ramadan. Credit: Debbie Egan-Chin

Islamic leaders from Jiddah to Jericho have faced a very 2021 challenge in this year’s run-up to Ramadan: Spreading the consensus that getting a coronavirus vaccination during that holy month doesn’t break the daytime fasting a Muslim is commanded to observe.

Islam, the leaders argue, extols the virtue of preserving life. Anyway, the leaders say, the fraction of a milliliter in a syringe injection doesn’t pass through the mouth and stomach. The campaign’s goal: to curb vaccine hesitancy over Ramadan, which celebrates the Quran’s first revelation to the Prophet Muhammad in the seventh century. Observers of the holiday, which starts Monday and ends May 12, do not eat or drink from dawn to sunset.

On the final weekend before Ramadan, Habeeb Ahmed, 67, knocked on doors in the neighborhood around his Westbury mosque — and not just of Muslim households — between 9 a.m. and 1 p.m., telling people where to get the vaccine.

"Everybody should do it as soon as possible if they have not done it," said Ahmed, chairman of the Islamic Center of Long Island, who got the Pfizer vaccine two months ago. He added: "When you become vaccinated, I become a little bit safer."

Long Island has about 35,000 religious adherents of Islam, according to the latest tabulation from the Association of Religion Data Archives, which counts adult members of congregations and their children, as well as others who regularly attend services. (It's unclear how many Muslims on the Island, or globally, are tailoring their vaccine scheduling for Ramadan.)

Traditionally in Islam, medical procedures are supposed to be scheduled outside of the Ramadan fast days, so the vaccine question fell into religiously uncharted waters that hadn’t been navigated in modern times globally, said Dr. Uzma Syed of Jericho, a specialist in infectious diseases.

There has been vaccine hesitancy on a localized level. During the West African Ebola epidemic, there was half as much acceptance of a vaccination during Ramadan among the general Muslim population than among Muslim scholars, according to an article this month in The Lancet medical journal.

The question of whether the coronavirus vaccines are halal (permissible under Islamic law) or harem (prohibited) has manifested around the world — in the United Arab Emirates, Britain, Michigan, Tunisia and elsewhere — and leaders have said it's halal.

Some Muslims have sought the Johnson & Johnson shot because it’s a single dose, thus avoiding the booster shots that the Pfizer-BioNTech and Moderna vaccines require to be scheduled weeks later — potentially during Ramadan.

Whether vaccination is halal during the holiday wasn’t the first vaccine-related controversy to roil the Muslim world during the coronavirus pandemic: Late last year, the vaccine’s pharmaceutical manufacturers promised that pork-derived gelatin, widely used in other vaccines as a stabilizer to preserve safety and effectiveness during transportation and storage but banned by Islamic law, was not present in the coronavirus vaccines.

In the months since the vaccine’s debut last year, Syed has sought to assure Muslims on both fronts — that the vaccine’s ingredients and administration on Ramadan are Islamically sound. She has also been working with a White House task force to implore Muslims around the country to take the vaccine whenever it’s available.

Still, Syed said, there should be more vaccine appointments scheduled close to, or after, sundown, when each day’s fast ends. That way, she said, someone experiencing side effects like achiness can hydrate or take a painkiller without breaking the fast.

"If you remove some of the barriers for people, then they don’t have that hesitation" she said, and "you’ll be able to get more people vaccinated without any reservations."

Some leaders, she noted, have offered an idea for those who believe taking the vaccine nullifies the day’s fast: extend the fast accordingly at the end of Ramadan.

Khalid S. Lateef, board president of Wyandanch’s As Siraatal Mustaqeem Islamic Center, said he will take the vaccine whenever he can get it, regardless of whether it’s in the month of Ramadan.

"The vaccine is necessary, so you take it, and if it's during the month of Ramadan, you take it and you just make up for that one day that you broke your fast to take the vaccine," said Lateef, 75, who said he would prefer the one-dose Johnson & Johnson shot, explaining: "one and done."

Even for those who are vaccinated, Ramadan this year won’t be a universal return to normal.

Syed said she is planning to host her family’s traditional break-the-fast with teas and fresh fruits and vegetables with two other households — her sister’s and her parents’ — all of whom are vaccinated except the youngest children, who are all attending school virtually. Her family’s break-the-fasts are smaller than in other years, but bigger than 2020’s, when only her household gathered.

Dr. Faroque Khan, a retired pulmonologist who is on the board of trustees of the Islamic Center of Long Island, said he will attend the daily fajr — the dawn prayer service that is the first of five throughout the day. It’s at 5:15 a.m. and usually the least crowded of all.

With smaller crowds, he said: "I’m fully vaccinated, but I feel a little bit more secure."

And he is urging whoever will listen to get the vaccine, whenever available: "Take whichever one is available and grab it."