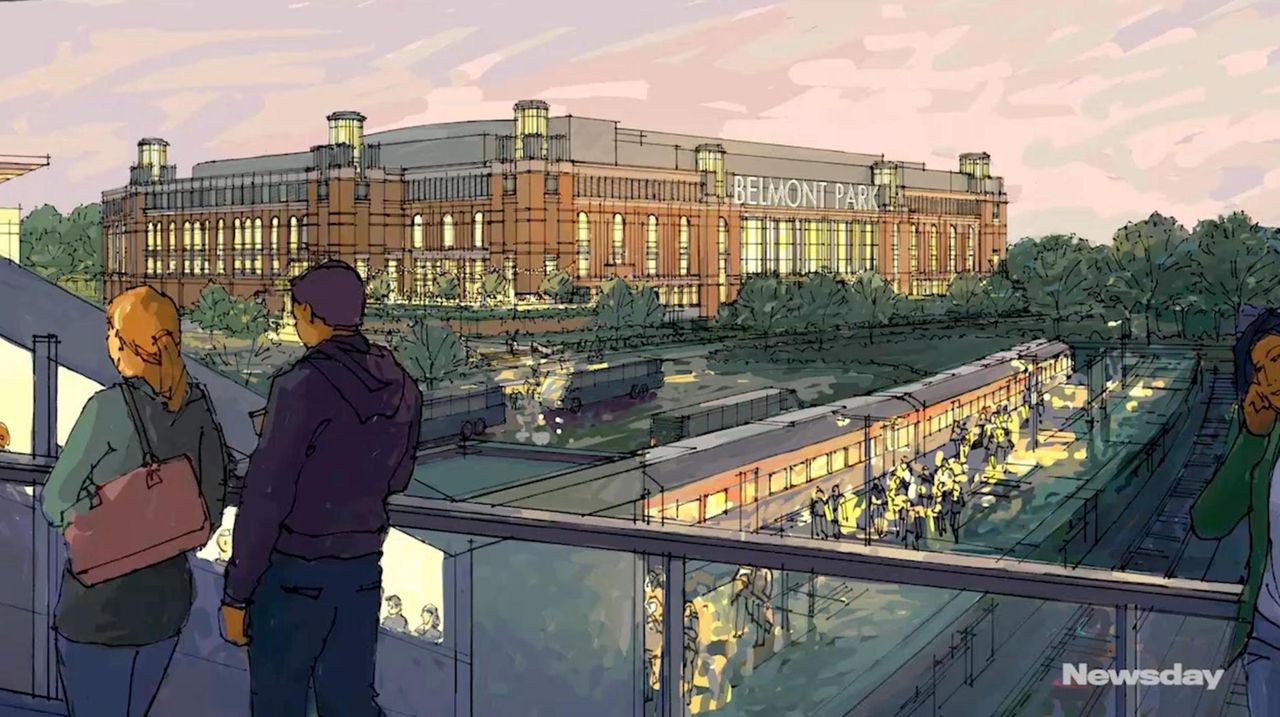 Bringing the New York Islanders back to Nassau County is almost a done deal, but the $1.26 billion redevelopment of the Belmont Park area didn't come together without a lot of give-and-take, records show.

The developer, New York Arena Partners, gets to put a 19,000-seat arena, upscale retail shops, restaurants and a 250-room hotel on state-owned land — without paying any rent — and interest-free, 30-year state financing to pay for nearly all of a $105 million new Long Island Rail Road station in Elmont, near the new arena. As part of the deal, the developer would pay the state $50 million up-front.

The state, in return, gets an economic boost that will create thousands new jobs and $800 million a year in spending and new tax revenue, according to Gov. Andrew M. Cuomo, who laid out details of the train station plan last week.

To economic experts, the wheeling-and-dealing isn't unusual, but the developer helping pay for a public utility is — especially because the state will still own the train station.

"It's a creative way of getting things done," said Kevin Law, president of the Long Island Association, the region's largest business group. "The state is investing a sum of money to leverage a much larger pot of money."

But state officials argue the deal is about much more than dollars and cents: It's a reinvention of the state's largest tract of undeveloped land in Nassau, a transportation solution and a long-term investment in schools and parks.

And it should create a lot of good will by bringing the Islanders back from Brooklyn to the place where many fans think they belong.

The deal isn't without critics, though. Homeowners and businesses nearby have raised red flags about noise and traffic. Other taxpayers think the state is giving too much for what it's getting.

Now, here's a closer look at the key players, what they scored and what they gave up:

Call it a power play for Long Island's economy.

State officials describe the Belmont redevelopment as an economic shot-in-the-arm that will create 10,000 construction jobs and 3,200 permanent positions at the arena, hotel and 350,000 square feet of office and retail space.

And then there's the money side. By 2024, the project should generate nearly $44 million in annual tax revenue for the state, county and the Metropolitan Transportation Authority, which oversees the LIRR, according to Empire State Development, the state's business development agency.

But the state had to make trades, too.

New York Arena Partners won't pay any rent to lease the state land at Belmont for the next 49 years. Instead, the group will make an initial payment of $30 million for the LIRR station and $20 million for electrical and sewer improvements. The state pays the remaining $75 million of the $105 million with the developer reimbursing the state for $67 million over 30 years — $2.2 million a year — without interest. The developer would not make any payments to the state during the final 19 years of the deal, from 2051 to 2070, officials said.

The state also granted the developer a 20-year tax abatement for the hotel and a 15-year one for the retail complex.

State officials note they restructured the deal since it was announced last year to get nearly $40 million more in upfront and delayed payments from the developer.

For State Sen. Todd Kaminsky, the LIRR stop — the first station built in nearly 50 years — was the single most important investment the developer could make to ensure the project's success.

"This is public infrastructure that will benefit the entire county and all of Long Island," said Kaminsky (D-Long Beach).

The plan is anything but an empty-net goal, though. Critics complain the deal was rushed without a full analysis of quality-of-life concerns for area homeowners, from traffic and security to sewage and lighting.

"We are concerned about how fast it's being done in that I don't think everything has been studied," said Floral Park Mayor Dominick Longobardi.

Despite the state incentives, sports economist Victor Matheson deems the deal "a pretty good outcome for both sides."

"The developer gets a mass transit option," said Matheson, who teaches at the College of the Holy Cross in Massachusetts. "And the state gets a bunch of help expanding its public transportation system."

For more than two decades, a string of Islanders owners tried to make a new arena happen on their own.

What made the latest plan work was a combination of fortuitous timing and a seasoned developer.

In 2017, after the years of stalled efforts, Cuomo stepped in just as a new set of Islanders owners were evaluating their arena options. New York Arena Partners — the owners of the Islanders, Mets and Oak View Group, a Los Angeles-based arena development company — won the development rights and state officials credit their willingness to revise their proposal to keep it moving forward.

The plan includes major revisions that came out of community feedback, including a LIRR station on the Main Line; an increase in revenue to the state; and a 20 percent decrease in the retail space, from 435,000 square feet to 350,000.

“We’re going to be neighbors in Floral Park for decades to come and we’ve got to be good citizens,” said team co-owner Jon Ledecky.

Critics contend the state’s financial return on the proposed 49-year lease doesn't do justice to the value of the 43 acres of land on the Nassau-Queens border. The state expects to complete an appraisal of the land in the coming weeks.

Maxcy, who teaches at Drexel University, argues the deal still might be the right one to stimulate the local economy, even if the land is worth more than what the developer is paying.

“The question is, ‘What’s the best use of this land?’” Maxcy said. “Is an arena, hotel, retail and a train station the best use? If it’s not the best use, then it’s easy to say the land is worth more than the deal the state is getting from the Islanders. We don’t know if that’s true.”

For Elmont and Floral Park, the project really is a tale of two communities.

In Elmont, a majority of homeowners and businesses support the plan. But only a couple of miles away, an overwhelming number in Floral Park adamantly oppose it.

Bill Kelleher lives in Floral Park, about 150 feet from what will be the arena’s north parking lot. He doesn't want to give up the calm of suburbia he sought when he purchased his home four years ago.

“On Belmont Stakes day, I leave town if I’m not attending it with my family. And that’s once a year and a very orchestrated event,” said Kelleher, 51, a manager at ConEd. “Now you are talking about 2,700 cars possibly blowing their horns around my house …. How am I supposed to feel?”

Aubrey Phillips is an Elmont resident who has concerns. His worry is that the project will tax the community's already overused resources.

“We are about to have an entity in the community that will use as much water everyday as Belmont Stakes day,” said Phillips, 61, an information technology consultant.

But the project isn't without benefits to the communities.

Two Elmont parks and playgrounds deemed unsafe will get upgrades. Millions of dollars more will go for upgrades to roads, sewers and an electrical substation. And the Elmont and Sewanhaka school districts, serving more than 12,000 students, will get $3 million in annual tax offsets.

Paul Sapienza, who owns of his family's 43-year-old bakery on Hempstead Turnpike, believes the redevelopment will not only "finally put Elmont on the map” but also provide a lifeline to Belmont Park, which is struggling just like many other racetracks nationwide.

"We have a lot of vacant storefronts and we need this … to generate interest in the town that will go far beyond the Islanders," said Sapienza, who is also president of the Elmont Chamber of Commerce.

Josh Johnson is a University at Buffalo student who plans to move back home to Elmont after he graduates.

"It’s about time Elmont had entertainment and amenities — something that's our own," said Johnson, 21. "I don't want to go to Floral Park or Valley Stream to take the train or eat in a restaurant. I want to have these things in my neighborhood."

Many hard-core Islanders fans on Long Island are pinching themselves.

They're finding it hard to believe their team is on the verge of finally getting its own new arena. And who can blame them?

The ride has been a bumpy one, littered with failed proposals, a taxpayer-rejected referendum to renovate the Nassau Coliseum and a move to Brooklyn.

“Until that shovel is in the ground, I don’t want to say I’m skeptical, but after what we’ve been through it’s hard to accept there’s finally a light at the end of the tunnel,” said Gary Harding, 55, of Halesite.

For fans, the Belmont arena represents new life. They see the arena providing first-class amenities, stability for the franchise's future and revenue that will let the owners to go after the best players.

And, like fans, the NHL believes the destiny of the Islanders is tied to the project.

"This team is synonymous with Long Island and a new arena secures their future today and for the next generation of fans," Commissioner Gary Bettman said.

Still, there are negatives for fans. For example, two parking-lot traditions from the Islanders' five decades in Uniondale won't travel with them to Belmont.

To address neighbors' concerns, the developer agreed to ban tailgating before games and rhythmic honking of car horns after games. Islanders fans have celebrated victories by honking to the tune of the “Let’s Go Islanders” chant while sitting in traffic.

“I can understand where people don’t want to hear the Islanders honk at 9:30 at night,” said Brad Shafran, 43, of East Meadow. “But I don’t envision that being easy to crack down on, either.”

Fans also are split on how to get to Belmont. Shafran expects to drive, but wonders if traffic around the arena will make the commute just as time-consuming as the LIRR ride from Brooklyn’s Barclays Center, which typically got him home around 11.

Harding expects to take the LIRR, especially on midweek nights when he's coming from work in Manhattan. In fact, the new LIRR station presents a new way for him and his wife, Claire, to get to games.

The Empire State Development board of directors votes on the Belmont proposal later this month. If approved, the project moves on to the Franchise Oversight Board, which oversees New York Racing Association and the Public Authorities Control Board. Ground could be broken at the property as early as August.