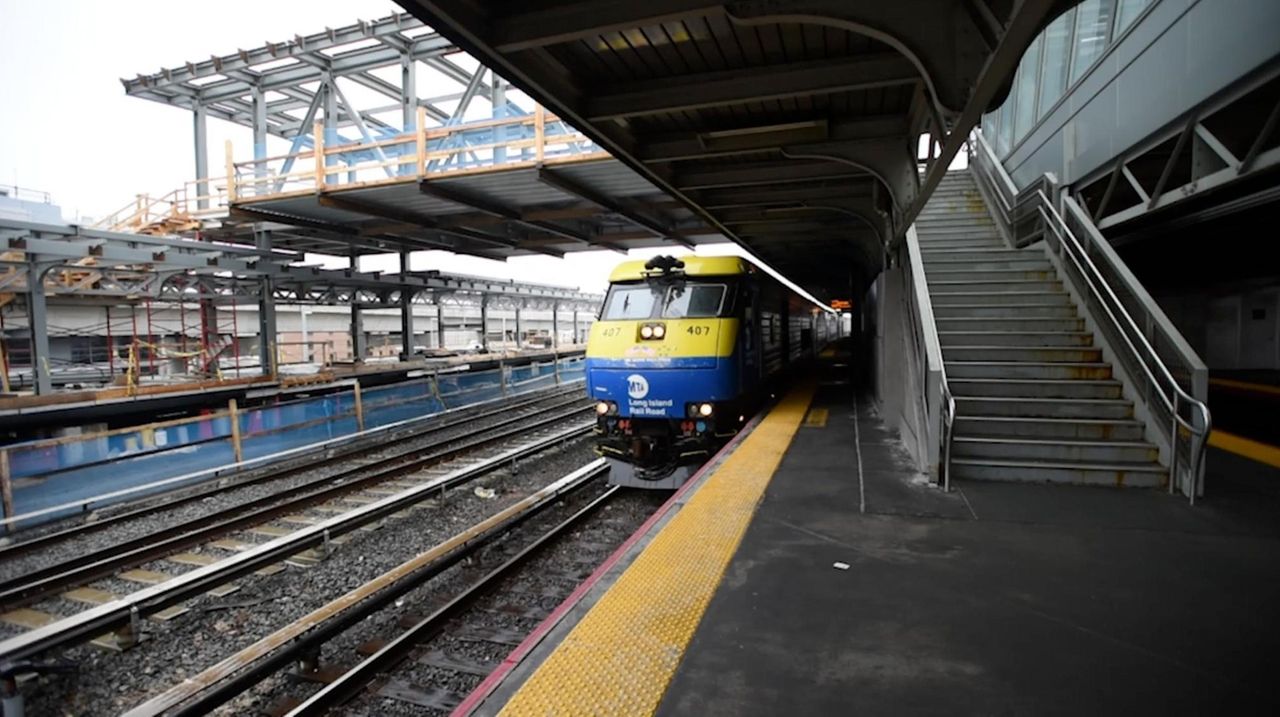 Phase I of the Jamaica Capacity Improvements Project will include a new track and platform on the south side of Jamaica station serving Brooklyn trains and a glass-enclosed heated waiting area at the new platform, with Wi-Fi and charging stations. Credit: Howard Simmions

A $380 million effort to unclog and modernize the Long Island Rail Road’s hectic Jamaica station will bring new amenities, track infrastructure and even an additional platform for riders, but also could complicate the travels of tens of thousands of Brooklyn-bound commuters.

Although the long-discussed Jamaica Capacity Improvements project, or “JCI” as it's known, promises several upgrades needed to handle the booming demand at the 106-year-old station, one key aspect of the effort — the construction of a new track and platform on the far south side of the station that will be used for shuttle trains on the Brooklyn line — could spell the end of one-seat rides or easy connections for the railroad’s 30,000 daily Atlantic Terminal commuters.

“It would just ruin our whole commute,” said LIRR rider Michael Godino of Malverne, who recalled breaking the news of the railroad’s plan to fellow commuters on a Brooklyn-bound train recently. “People were saying, ‘No way are they going to do this. They won’t do this. They can’t do it.’ And I said, ‘They’re doing it. Look, they’re building it right now.’ And I pointed out the window to the tracks.”

The progress made so far in the project is visible to the 280,000 LIRR customers who travel each day through Jamaica — the railroad’s second-busiest station, behind just Penn Station, and its key transfer point. The concrete for the new platform — known as “Platform F” — already has been poured. Steel structures have been erected for a canopy and for pedestrian bridges linking the new platform to the rest of the station. A new retaining wall was constructed, and new utilities have been installed.

Once completed in late 2021, the new platform also will feature a glass-enclosed waiting area, Wi-Fi access and charging stations, project officials said. The work on the new platform is costing the railroad about $302 million, while another $78 million is being spent to design future improvements. The project was largely funded in the Metropolitan Transportation Authority’s 2010-14 Capital Program.

When the railroad years ago proposed replacing its current Brooklyn train service with a shuttle train at a dedicated platform at Jamaica, they said it would help simplify train flow at the congested transit hub, through which 640 trains on all but one of the LIRR’s 11 branches pass every day. It also would open up needed capacity as the railroad looks to expand its service as part of East Side Access, which aims to link the LIRR to Grand Central Terminal by 2022.

Railroad officials also have said the change would result in a net increase of Brooklyn trains, as the shuttles would run about every seven minutes during the rush hours. But Brooklyn customers and commuter advocates long have raised concerns over the plan, which could add several minutes to some commutes, as passengers would have to get off the trains, navigate up and over some or all of Jamaica’s eight tracks, and come back down to wait for the next shuttle train.

That prospect is especially daunting for LIRR riders with mobility issues, like Christopher Brown of Kew Gardens, who uses a wheelchair.

“That makes no sense to me,” Brown, 39, said at Jamaica on Thursday. He estimated the change would add at least five or six minutes to his ride. “It’s not something that would make the trip more comfortable, that’s for sure.”

Atlantic Terminal has steadily grown in popularity in recent years, coinciding with the growing development in Brooklyn and the opening of the Barclays Center in 2013. The Brooklyn hub also is a popular option for commuters working in lower Manhattan, which is a short subway ride away.

Although the railroad years ago proposed the Brooklyn shuttle plan, LIRR president Phillip Eng, responding to complaints from commuter advocates shortly after joining the agency last April, directed his staff  to reconsider the plan and look at ways to preserve at least some direct train routes between Brooklyn and stations on Long Island.

“We’re trying to manage the different, varying needs of our customer base. There are some that would love to see just more, improved and frequent service [between] Brooklyn and Jamaica. But then there’s others that, we know, enjoy and value that single-seat ride coming from further east,” Eng said following a meet-and-greet event with customers at Jamaica on Thursday. “We’re looking at it, and we’re trying to see how we can manage both, because we do understand the importance of it.”

Mark Epstein, general chairman of the LIRR Commuter Council, credited Eng and his staff for listening to riders' concerns about the proposed changes, and is hopeful to arrive at a compromise that will preserve the “option of still having a one-seat ride” between Brooklyn and stations on Long Island.

LIRR officials said a final decision on its Brooklyn service plan will come in a couple of years, as the railroad finalizes a plan for a broader reconfiguration of Jamaica as part of the project’s proposed second phase.

The railroad expects that the second phase of the Jamaica Capacity Improvements project will represent the most significant overhaul of the station since it opened in 1913.

The work aims to streamline the flow of trains through the congested station, including by eliminating dozens of switches, extending platforms to accommodate longer trains, adding two track routes just east of the station, and installing new high-speed switches that will allow the trains to travel twice as fast through the 2½-mile-long Jamaica complex — going from the current 15 mph speed limit to 30 mph.

The effort, which also will include the replacement of tracks, signals and power systems, is expected to cost about $1 billion and be funded through, and carried out over, several of the MTA's five-year capital programs — the next of which is due to be released later this year.

The upgrades aim to bolster Jamaica to address the railroad’s surging ridership, which reached a modern record of nearly 90 million passengers last year. The station’s congestion, antiquated track infrastructure — some of it a century old — and complex switching system make it especially vulnerable to problems that can cascade throughout the LIRR system, as trains wait at Jamaica for late connections. The issues contributed to the railroad in 2018 having its worst annual on-time performance in 19 years.

“We all know how many of our trains come through Jamaica and how much that slows down the actual travel time,” said Eng, whose office is in Jamaica in the LIRR’s headquarters there. “We know everyone is looking for a shorter ride and a more reliable ride. This will be able to provide both, and have more capacity through the area.”

Epstein said the planned upgrades in the second phase are critically needed at Jamaica, a chokepoint for the railroad that he called the “hidden enemy” of commuters.

“It’s that ‘Jamaica crawl.’ … You may not be paying attention to it, but you feel it. You feel the train slow down or stop,” Epstein said. “We all know it. We all feel it. And I’m glad they’re actually trying to address it, because it’s the weakest link in the entire system.”

LIRR rider Lynn Sherman, who commutes between Bellerose and Atlantic Terminal, said she would welcome improvements to the Jamaica station, even if it means some added inconvenience on her way to and from Brooklyn. But, Sherman said, the railroad’s recent track record, which includes her morning train arriving late “every single day,” makes her skeptical of the benefits.

“For most New Yorkers, everything is about time. So if you can really get me to and from [my destination] in the time estimated, then I’d be willing to make adjustments … The problem is it’s so unreliable,” said Sherman, a 27-year LIRR rider. “I think LIRR riders are really adaptable. They’ll work with the railroad, but they’ve lost our trust.”