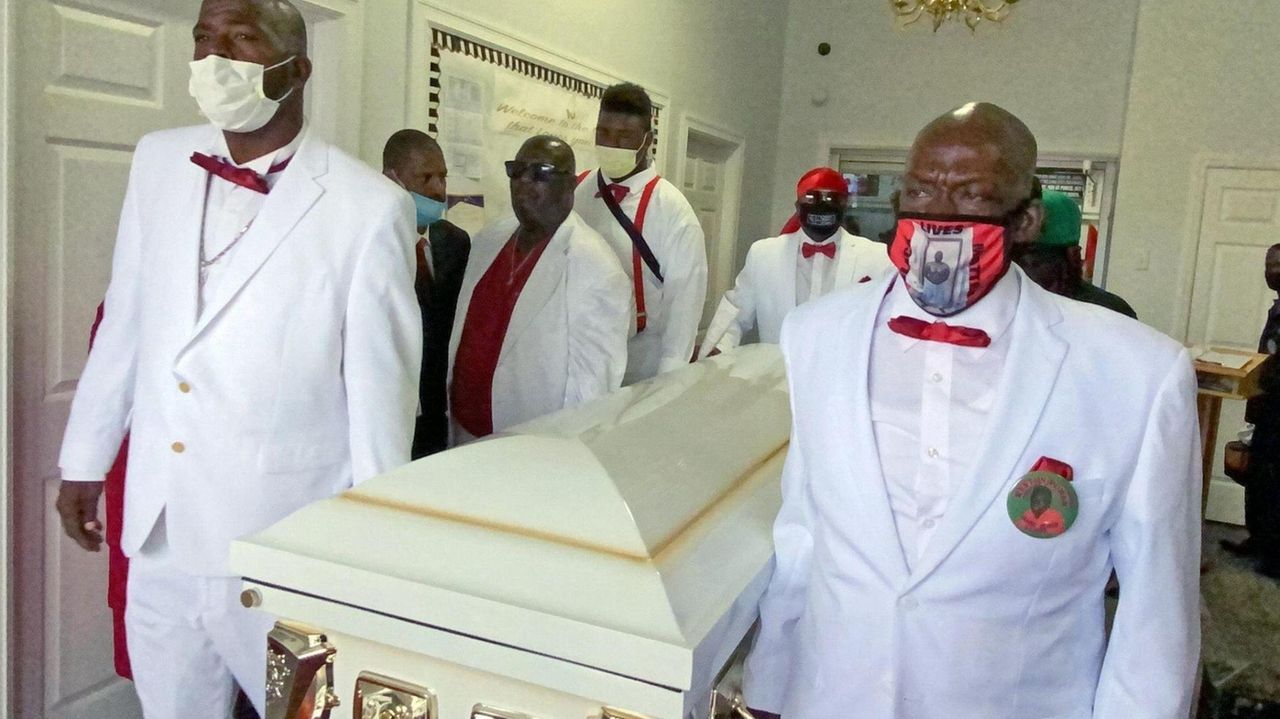 At his funeral, Floyd's family members say they still want answers about why he died after being pepper-sprayed by correction officers at the Metropolitan Detention Center in Brooklyn. Credit: Howard Schnapp

Jamel Floyd’s family held his funeral in Hempstead Tuesday, a ceremony tinged with anger and unanswered questions about his death at the hands of corrections officers inside the Metropolitan Detention Center in Brooklyn.

Floyd, 35, had 120 days left on a 14-year sentence when officials at the federal facility said he became disruptive June 3 and was pepper sprayed by more than a dozen officers after barricading himself in his cell. Floyd’s death prompted two New York City congress members to demand a federal investigation.

Results of an investigation into his death by the Office of the New York City Medical Examiner, opened the day after Floyd died, are pending, officials said Tuesday.

“Jamel did not deserve to die the way he died in that facility,” his father, James Floyd, said at Judea United Baptist Church In Hempstead, the site of the funeral. “After serving 14 years, He was on his way home in 120 days. That hurts me so bad I cannot describe the pain in my heart. He did not deserve to die. He was a quiet, good person. He had a heart of gold.”

Inside the church, Jamel Floyd laid in an open white casket up front with photos, taken after his death, taped to the floor leading up to it.

Family members dressed in his favorite colors — red and white — and wore protective masks with his photo and slogans like “I can’t breathe” and “No justice.”

After the funeral, his father and others carried his coffin to a horse-drawn carriage where it was led away from the church.

Floyd was born and raised in Hempstead where he played baseball and basketball. He played in the police activity league at Kennedy Park in Hempstead and attended Jeremiah Blessing Center Church. Floyd also earned his GED, training in woodworking and carpet laying.

His stepsister, Delsie Roland, said Floyd would help others in the community, but as a young man got into trouble.

“Unfortunately, just like many young black males, he got into some bumpy roads,” Roland said. “He never made it home to show he can change and that he changed. I’m angered life was taken so short and now he can’t.”

Floyd had been transferred to the Brooklyn federal detention center last year to serve the end of his sentence for a 2007 Hempstead home invasion robbery.

Detention center staff said they observed Floyd barricaded inside his cell June 3 and breaking the cell door window with a metal object. Federal prison officials said Floyd became “increasingly disruptive and potentially harmful to himself and others, when he was pepper sprayed and removed.”

Medical personnel were called to assess Floyd after he was found unresponsive and staff attempted to revive him. He was taken to a hospital where he was pronounced dead, officials said at the time, adding that his death didn’t appear related to the coronavirus.

“Federal detainees deserve to be held humanely,” Nadler and Velazquez wrote in their request. “Any action that is attributable to neglect on behalf of the federal agency in charge of their detention must be investigated.”

Family members called for closing the detention center as well as probes into Floyd’s death and the treatment of other inmates.

“Shut down that jail to the ground,” James Floyd said.

Other family members argued against the Bureau of Prisons’s official account, which they were told was not recorded on body cameras.

A representative for the Bureau of Prisons was not immediately available for comment Tuesday night.

Floyd’s cousin Tomika Mays said he was not a threat to himself or others.

Report: Thousands of MTA employees don't use time clocks designed to prevent fraud
These restaurants, employers, colleges and NYC theaters will be requiring COVID-19 vaccines
1:36
LI group works for health, racial and gender equity
Four LI hospitals ranked among Top 50 in U.S. in medical specialties
Educator plans lawsuit, says he was reassigned for 'outspokenness' over book
Two turntables and a microphone made Biz Markie a legend
Didn’t find what you were looking for?