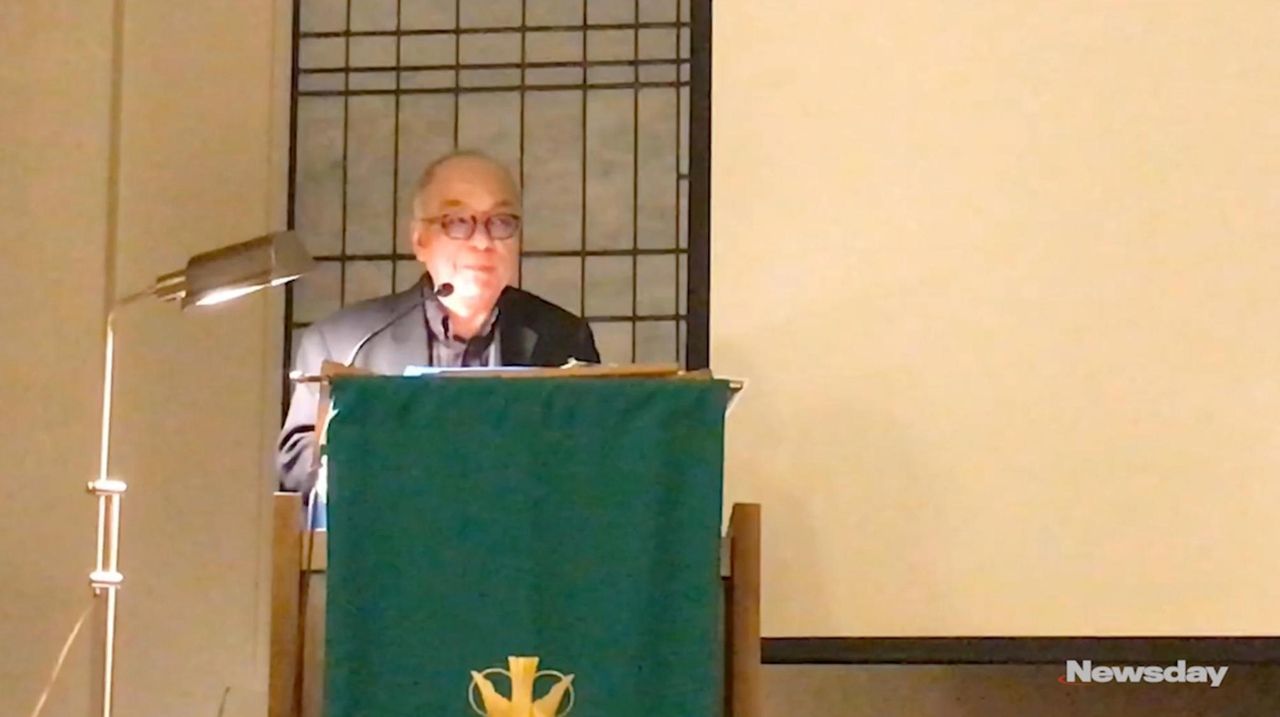 Tadashi Tsufura, who was interned during World War II, speaks at the New York Day of Remembrance, an annual program marking the roundup and incarceration of Japanese-Americans during the war. Frank Abe, an event organizer, also speaks at the event, held Saturday at the Japanese American United Church in Manhattan. Credit: Newsday / Matthew Chayes

Even decades after the nearly 120,000 Japanese-Americans were freed from World War II-era internment camps, stigma and prejudice and historical amnesia lingered, according to Tadashi Tsufura, who with his family had been forcibly interned.

“In the hearts of many in this country,” Tsufura told a remembrance service Saturday in Manhattan, “we were still considered as the Jap enemies of World War II.”

Tsufura spoke at the Japanese American United Church in Manhattan’s Chelsea neighborhood to mark 77 years since Feb. 19, 1942, when President Franklin Delano Roosevelt signed Executive Order 9066, which led to the forced relocation of Japanese-Americans, ostensibly to ensure “every possible protection against espionage and against sabotage.”

Tsufura, who was born in 1930 in Los Angeles and sent in 1942 to the Gila River internment camp in Arizona, said America hadn’t begun to recognize what the country had done to Japanese-Americans until the mid-1970s, when a historical and civil rights movement began, helping bring about a reparations and apology bill signed by President Ronald Reagan in 1988. Each survivor was ordered paid $20,000.

“There was dead silence over the whole country,” said Tsufura, later a Korean War veteran and longtime math teacher and elementary school principal. “No one talked about the American concentration camps.”

Roosevelt rescinded the order in December 1944, with a six-month wind-down process to free internees and shut down the camps, according to an online archive maintained by the University of California, Berkeley. The war with the Japanese ended the following August.

“Let us be the allies we needed in World War II," he said, adding: “The experience of mass incarceration was not one we pursued. But with the moral authority of that experience comes the moral responsibility to stand in defense of others threatened today, threatened now, by the same prejudice, hysteria and failed political leadership.”

Among the 100 or so in the church pews Saturday was Linda Morris, 29, of Park Slope, Brooklyn, who said she draws inspiration from her grandparents, May Asaki and Paul Ishimoto, who were forced from their homes in California to an internment camp in Arkansas.

Morris credits her current work as a civil rights lawyer for the American Civil Liberties Union in large part to the legacy of her family’s experiences.

“My work focuses on advancing housing opportunities for women of color, and so, in thinking about that type of work,” she said, “I thought a lot about my grandparents’ experience, the difficulties that they had in finding housing and employment because of their Japanese background.”