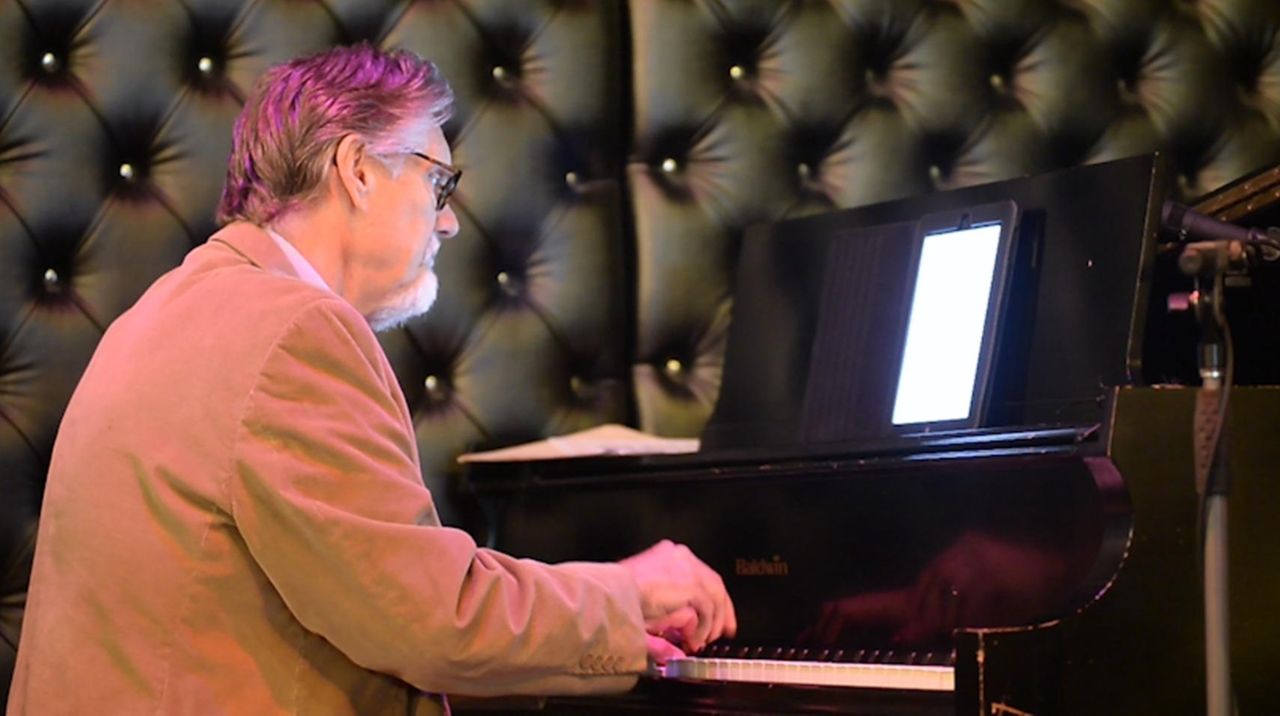 Robert Lepley of Bellmore is a former minister who has been a professional musician for about 20 years, and now enjoys playing music with people he listened to growing up in Columbus, Ohio. On Monday, June 26, 2017, Lepley spoke of his new jazz album, "MacDougal St., NYC", and of some of his experiences in the recording studio working with stars such as Meryl Streep. Credit: Steve Pfost

When Robert Lepley sits at the piano to jam with fellow musicians at Treme blues and jazz club in Islip, the first thing you notice is his broad smile. Even before breaking into “MacDougal St., NYC,” an original piece he wrote that’s also the title of the Bellmore jazz man’s CD released in May, you know from his face that Lepley is eager to start playing.

He waited long enough — 25 years, in fact — to reach the point where music became his full-time career. Lepley, 68, who retired from working as an ordained minister in 2000, has become a popular fixture among Long Island’s small but loyal base of jazz fans. In addition to his regular gig at Treme (pronounced tre-MAY) on the last Sunday of each month, he’s performed at The Inn at Fox Hollow in Woodbury, among other spots, and has released two CDs.

“I tell people I feel like I’m at recess and playing in the sandbox,” he says about working as a full-time musician. “I love playing the piano, writing music and teaching. I have many students come to my house studying classical, jazz, blues, songwriting, even hip-hop.”

The double-CD “MacDougal St., NYC,” which is named for the Greenwich Village street where Lepley and his wife, Martha, lived in the 1980s, has been a labor of love. The first disc consists of eight original songs by Lepley, including one called “Oyster Bay, LI.” The second features eight standards, including “Cheek to Cheek” and “Autumn Leaves,” with arrangements by Lepley (pronounced le-PLAY). The album took three years to make and features 33 musicians, all friends that he’s played with over the past 45 years.

Among those friends is bassist James Cammack, of Holbrook, who also performs with Lepley at Treme. The two met when Cammack, who has played with renowned jazz musicians including Ahmad Jamal over the past four decades, heard Lepley performing at Fox Hollow. “Bob and I have a great time when we play,” Cammack, 61, says. “Bob looks over and smiles because he knows I’m listening to him and I hear things that he does. He’s got a really great mindset for arrangements and chords.”

It certainly helped that Lepley, who started playing piano when he was 4, never abandoned music during his 25 years as a minister in Ohio (he grew up in Lancaster, a small town outside of Columbus) and New York City. During that time, he continued to write and also played occasional gigs at jazz clubs. And he’s also grateful that the experiences he had during the ministry helped shape him as a songwriter.

“Music is a combination of mathematics and emotions,” he says. “Without either one of those, the music is incomplete. And certainly the emotion was provided in those 25 years. You don’t stand in cemeteries for many years with families who have lost loved ones without absorbing that. And on the other hand, I was presiding over wedding ceremonies. You bring that into your art.”

At Treme, Lepley and his trio — which includes Cammack and drummer Frank Bellucci — headline the monthly jazz jam in which they perform and also allow other musicians and vocalists to sit in with them.

“He’s very good with vocalists,” says Catherine Green of Sayville, who’s joined Lepley and friends for many a jam session. “Not every pianist can accompany a vocalist, and not every jazz musician is willing to support the vocalist.”

Treme owner Josh Thompson, 39, agrees and also admires Lepley and his group’s professionalism. “They’re like an all-star three-piece,” he says. “These guys, they know what they’re doing. They’re tight. They always work together real well.”

The bond shared by Lepley, Cammack and Bellucci isn’t taken for granted. “I get to play with the best on Long Island,” says Bellucci, 58, of Dix Hills, who’s worked with Lepley since 2008. “Playing together, it goes deeper with the friendship, which makes the experience better. We connect that way and you don’t have that with everybody.”

It was pretty much a given that Lepley would develop a passion for music. His mother was an accomplished violinist who started teaching him piano when he was 4.

“She’d play a line on her violin and say, ‘Now you play something on the piano that fits this.’ So she taught me chords, how to listen to another musician, and that’s how I got started,” Leplay says.

He started composing music in junior high, primarily pieces for the church choir that his mother worked with. At the same time, he studied classical piano, which was his minor at Capital University in Columbus.

His early musical inspirations, besides his mom, were classical composers such as Ravel and Debussy. In high school, when he was introduced to jazz, he became influenced by Duke Ellington and other standouts of that genre. He also started playing at clubs in Columbus, and became friends with local musicians, many of whom are heard on “MacDougal St., NYC.”

“Columbus had a good jazz vibe and I had a lot of gigs with some great people,” he says.

Lepley never considered another career path until he entered college and became acquainted with liberation theology, a religious belief developed in Central and South America aimed at liberating the oppressed. “It was a radical form of theology that the Jesuits used during Vatican II for helping the peasants,” Lepley says. “I used that model for my church and I did a lot of community organizing.”

Those activities ranged from running a jazz meditation for musicians to doing interventions with street-gang members. He served as executive director of the Long Island Alliance for Peaceful Alternatives, an anti-war organization, from March 1997 to December 2002. He worked for the United Methodist Church and the United Church of Christ in parishes in Columbus and New York City, where he and his wife also raised their son, Benford, who is now 27 and lives upstate in Saugerties. Though Lepley had the occasional gig, jazz was still a small part of his life.

“I wasn’t a jazz monk, and to play jazz you really have to be a jazz monk, meaning you have to give everything you can to practice, to deepening your art,” he says. “It’s like classical music — it’s a difficult, demanding music to play.”

After retiring, Lepley began playing in New York City with well-known musicians, including saxophonists Sonny Fortune and Joe Lovano, and at the few spots on Long Island where jazz is featured.

He also made his first CD, “Ancient Tower,” in 1996. It featured six of his compositions set to the poems of Rainer Maria Rilke. The disc, which was reissued and retitled “Visions Within” in 2010, was narrated by actress Meryl Streep, who was under contract to Warner Bros., which owned the record company.

She and Lepley bonded immediately, and he unexpectedly got the opportunity to direct her during the recording session. Streep kept stumbling over a run-on sentence in one of the poems and the Oscar winner asked for Lepley’s help. He explained the meaning of the line, but she still struggled and again asked his help.

“I said to her just try reading it with more feeling,” Lepley says. “Then I thought, ‘Oh my God, I just told Meryl Streep, the most emotive actress in the universe, to read with more feeling.’ And she did, and she thanked me.”

Lepley is hoping that for his next CD, he can make a solo recording of just the music from “Visions Within.” And you’ll still find him at Treme on the last Sunday of the month, jamming with his jazz pals.

“Sometimes I think I would have liked to have traveled the world,” Lepley says, musing on a different life, had he chosen jazz first when he was younger. “But it’s very interesting to have been a parish minister. It was a privilege to me to have people come in and reveal their deepest selves. I think that also helped me be a better leader. I learned a lot and I got a lot back and I would do it again.”

If you’re jazzed to hear Lepley, here’s where you can, both live and recorded.

Treme jazz jam the last Sunday of each month