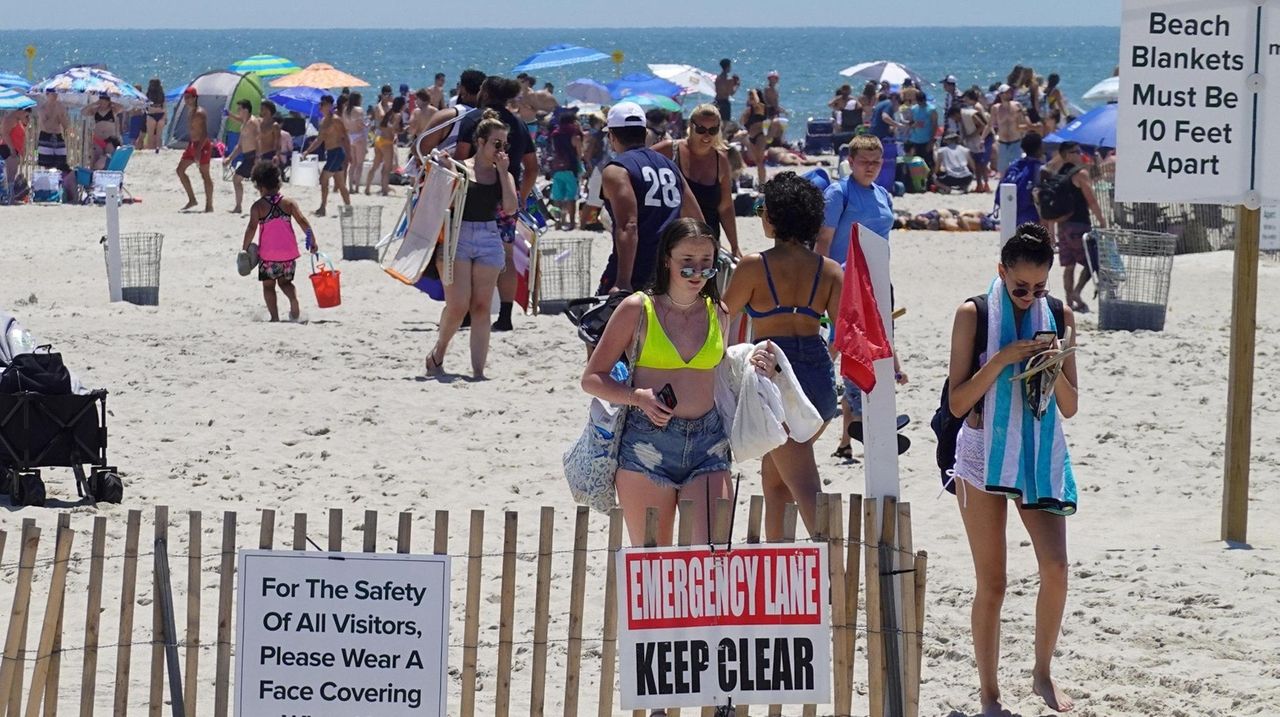 As Long Island beaches open for the summer season, some beachgoers worry that tensions could surface between those who wear protective masks while maintaining social distancing and those who don't follow the COVID-19 safety recommendations.       Credit: Debbie Egan-Chin

Kitty Stewart finds her “peace place” when she’s by the shore.

But the Glen Cove resident was feeling anything but Zen last Friday while at Jones Beach. She said people repeatedly failed to maintain social distancing and encroached on her space — leading Stewart to eventually pack up and go home.

“It wasn’t fun. And I love the ocean. It’s my peace place,” said Stewart, 72, who wears a protective mask in public and does her best to maintain social distancing guidelines amid the ongoing COVID-19 pandemic.

As Long Island slowly reopens and summer officially starts on Saturday, Nassau and Suffolk beaches are a likely destination for thousands seeking outdoor relief after a housebound spring. But a trip to the shore won't necessarily be a day at the beach if tensions flare between those like Stewart, who wear protective masks, and those who don't.

Stewart said she reached her personal boiling point last Friday after reminding a large group nearby about the need to social distance and then seeing a ball roll onto her beach blanket.

“Some kids started coming close to me, and I said, ‘We are supposed to keep our blankets 10-feet apart.' They sort of smiled and ignored me,” she said, adding that she then saw the ball roll up. “I was like, ‘enough, I’m out of here.’ "

For all her well-meaning intentions — donning a mask, which health experts have said is the best way to prevent spreading the coronavirus to others — Stewart was in the decided minority that Friday. The vast majority of those at Jones Beach chose to go maskless.

Kareem Chareef, 44, of Queens, said he and others with him at the beach donned masks at first.

“And then we kind of took it off,” he said. He added that as life reopens in New York, people are reverting back to the days before the pandemic when it comes to wearing masks. "At first, everyone was very strict with it. But then everyone loosened up after a while," Chareef said. "In time, people just get back to living their regular life."

Signs encouraging visitors to maintain 6-feet distance, and 10-feet between beach blankets, were posted throughout Jones Beach. Signs at the beach urged visitors to cover their faces when distance could not be maintained.

Even so, some beachgoers said last Friday that no park employees enforced the rules and social distancing was practically nonexistent on the sand.

State park officials could not be reached late Wednesday. However, the state’s website makes more than a dozen recommendations while visiting state properties. Among those recommendations: visit in small groups limited to immediate household members, maintain distancing, don't share equipment, avoid long stays and leave if a beach or park gets too crowded. People older than 70, or who have compromised immune systems, are encouraged to wear masks.

Larry Pitterman, 73, of Manhattan, visited Jones Beach last Friday with his wife, Marjorie, also 73. The two held hands and wore masks as they made their way to the boardwalk.

Larry Pitterman said he gets annoyed when he's out in public and some groups fail to maintain social distancing — especially joggers.

Pitterman doesn’t hesitate to tell runners and other pedestrians to stay away, he said.

“They’re the worst offenders because they are generating all the droplets that are coming to me,” he said of joggers.

Marjorie Pitterman said she’s afraid some may not view her husband’s advice as helpful.

“My fear is he’s going to annoy someone so much when he says, ‘Move over.’ ”

Raymond A. DiGiuseppe, a psychology professor at St. John’s University, said while New Yorkers escape to the great outdoors, those who wear masks should give the benefit of the doubt to people who aren’t.

“It’s a new habit and it’s going to take people a while," DiGiuseppe said. "They may have just forgotten."

“Try to keep your distance and accept the fact some people who don’t wear masks will forget or have political beliefs the disease is a hoax,” he said. “Getting angry is poison … You’ll just get the person to get angry and yell, and now spread the virus, if they have it.”

If someone feels the need to speak out, DiGiuseppe recommends saying something that is non-accusatory like: “I feel uncomfortable if you don’t wear a mask. Could you wear one?”

Visitors at Jones Beach noticed how older beachgoers were more prone to wearing masks. But the observation didn’t fit everyone.

Karan Kumar, 18, of Albertson, was at the beach with his buddy, Andrew Wagner, 18, also of Albertson.

Kumar was wearing a $150 mask that features “refillable carbon filters,” he said. Wagner also wore a mask, but admitted, he’s hot and cold about it. Wagner said he and his parents have gotten into tiffs over the issue.

Kumar said he’s been in public without shielding his face, and the angry stares prompted him to change his ways. Despite the advice from scientists and medical professionals to wear protective face coverings, Kumar said, some people “just don’t care enough.”