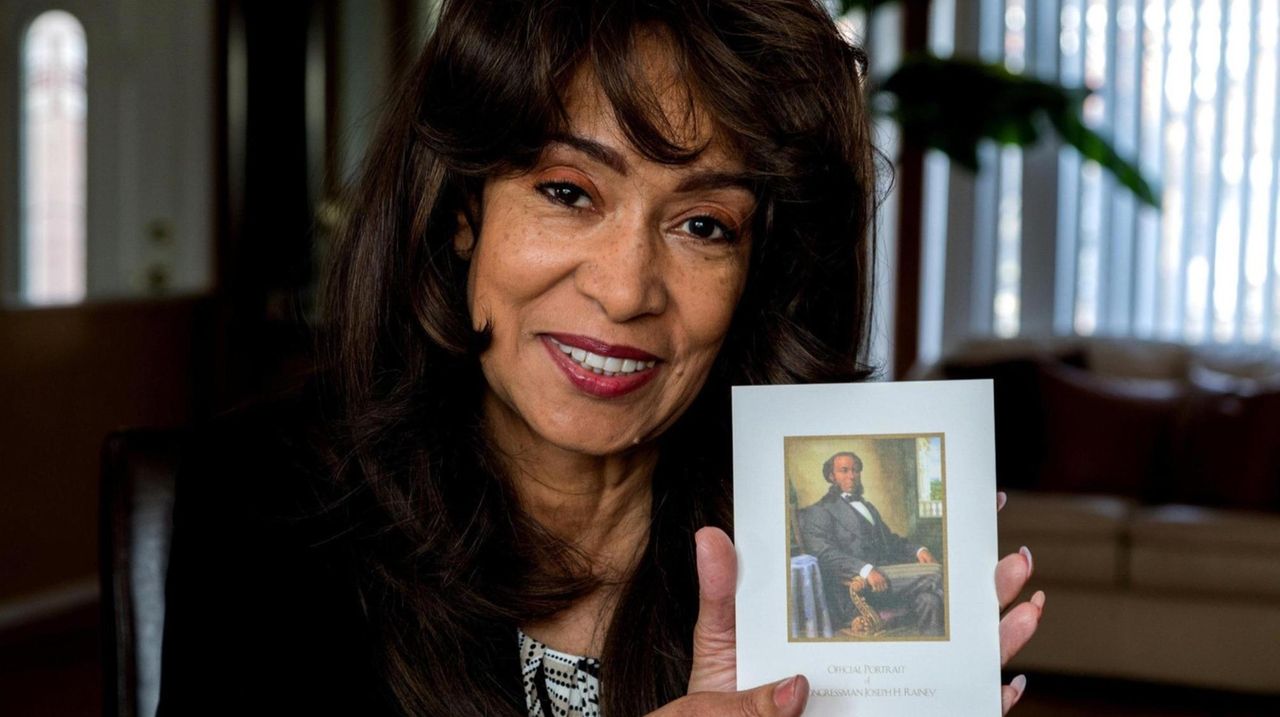 Lorna Rainey of Baldwin speaks about her great-grandfather, Joseph Rainey, who became the first Black person elected to the U.S. House of Representatives on Dec. 12, 1870.   Credit: Barry Sloan

At age 3, Lorna Rainey would sit on the knee of her great-aunt Olive and hear stories about her great-grandfather, Joseph Hayne Rainey of South Carolina.

Now, Lorna Rainey, who lives in Baldwin, is trying to keep that family legacy alive.

Joseph Rainey was the first African American to serve in the U.S. House of Representatives. Saturday marks the 150th anniversary of his 1870 swearing-in. Rainey won a special election to fill a vacated seat in South Carolina's 1st Congressional District, where he would serve four terms.

Joseph Rainey was born a slave on a rice plantation in South Carolina in 1832. His father, Edward, purchased his family’s freedom using money he earned as a barber. Though a free man, Joseph Rainey was conscripted to work for the Confederates during the Civil War. He instead fled to Bermuda and returned to South Carolina after the war.

"I felt, for a long time, like I was crying in the wilderness about him because I’ve been talking about him to people for a while," Lorna Rainey said. "It’s only recently that things have started to really pick up and things are starting to be pulled together about him."

As a child, Lorna Rainey said, she would rarely see mention of her groundbreaking great-grandfather, with maybe a line here or there popping up in a random history text.

This comes nearly 15 years after Joseph Rainey’s portrait was unveiled and hung in the U.S. Capitol.

"It’s a wonderful vindication and verification of something that I’ve known that I was supposed to push for since I was 3 years old," Lorna Rainey said. " … I’m not saying that I did it by myself, but I never doubted that it would happen … Through the years, I just kept pushing for it and exploring different angles and options, media outlets, and places that I could speak about it. Now, here we are, the 150th."

In January, Lorna Rainey will begin filming a full-length documentary about her great-grandfather. To mark Saturday’s anniversary, a 10-minute tribute video will be released on her website, Raineyfilmandmedia.com, she said.

"He had inspired me, and the least I could do now is turn around and share his story to help other people be inspired," said Lorna Rainey, who owns a talent management company, The Talent Express. "Honestly, it’s not really a black story or a white story, it’s an American story. It’s the story of someone who rose from nothing to greatness. That’s an American story. It’s what we all think the best of America encompasses."

In Bermuda, Rainey worked as a barber and bartender. His wife, Susan, was a successful dressmaker. While there, Rainey was struck by the ease of a lifestyle where former slaves had been free for nearly 30 years, his great-granddaughter said.

When he returned to the United States after the Civil War, Joseph Rainey helped found the Republican Party in South Carolina. After Rep. Benjamin F. Whittemore resigned due to accusations of improper actions in early 1870, Joseph Rainey was nominated by the party to run in both a general and special election — one to finish Whittemore’s term and another to serve a full term of his own. He won both with at least 63% of the vote, according to the House of Representatives website.

"It was a celebrated moment around the country, especially among African Americans, who saw him as a symbol and saw him as a person who embodied their hopes and dreams," said Bobby J. Donaldson, an associate professor and the director of the Center for Civil Rights History and Research at the University of South Carolina.

While in Congress, Joseph Rainey was a champion for the rights of Native Americans, Freedmen and Chinese railway workers, Lorna Rainey said.

"The irony was, he fought continuously throughout his time in Congress to keep his seat because from the very moment he was elected, there was a very clear directive among white South Carolinians to do whatever they could to undermine his effectiveness," Donaldson said. "Today we talk about stolen votes and voter suppression. He witnessed all of that in the time he served in Congress."

While her work is not done, Lorna Rainey is no longer yelling into that dense wilderness of history. Although it was a sometimes lonely crusade, it was always a satisfying one. History, no matter how dormant, is never dead. For that, she and her great-grandfather are very much living proof.

"This is a story that anyone can lean on for inspiration," she said. "It’s something that tells you that you need to persevere. Even if it takes 150 years for people to recognize you, it will eventually happen."